To be honest, I never knew you existed. Back when our birth plan included a fat baby, balloons and a two-day celebratory hospital stay, I had never seen you. I had never seen a NICU. Most of the world hasn't. There may have been a brief, "This is the Neonatal floor" whilst drudging by on a hospital tour. But no one really knows what happens behind those alarm-secured, no-window-gazing doors of the NICU. Except me. And you. 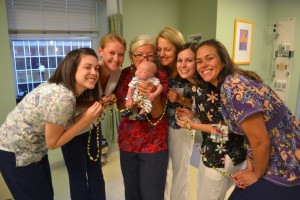 Our 24-weeker, Tucker, with his primary nurses a few weeks before he was discharged.

I know you now. I'll never be able to think of my child's life without thinking of you.

I know that in the NICU, you really run things. That your opinions about my baby's care often dictates the course and direction or treatment as you consult with the neonatologist every day. I know that you don't hesitate to wake a sometimes-sleeping doctor in the nearby call room because my baby's blood gas number is bad. Or because his color is off. Or because he has had four bradys in the last 45 minutes. Or because there's residual brown gunk in his OG tube.

I know now that you are different from other nurses.

I've seen you, in an instant, come together as a team when chaos ensues. And let's be honest, chaos and NICU are interchangeable words. When the beeper goes off signaling emergency 24-weeker triplets are incoming. When three babies in the same pod are crashing at the same time. When the power goes off and you're working from generators. In those all too often chaotic moments, you know that time is more critical in this unit than any other, and you don't waste it. You bond together instantly as a team, methodically resolving the crisis until the normal NICU rhythm is restored.

Most of the world still doesn't know what you do. They can't understand how integral you are to the positive outcomes of these babies who started life so critically ill. But I do. I know you now. I will never forget you. In fact, our story can never be told without mentioning you. So the next time you wave your access card to enter the place that few eyes have seen, know that you are appreciated. I know you, and you are pretty amazing.