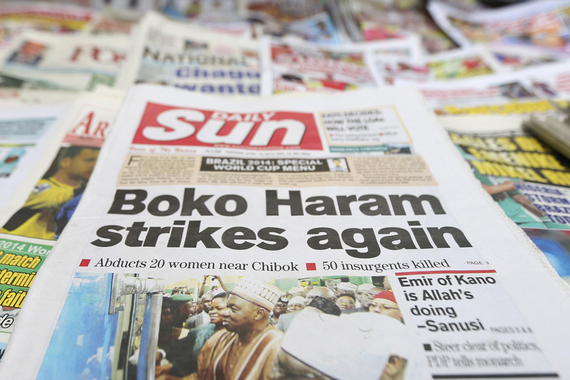 Five months ago, Professor Hassan walked through the doors of a hotel restaurant in Bauchi, northern Nigeria.

He sat down at a table, greeted the two journalists there and commenced his message. He browsed through his belongings and grabbed a stack of articles printed off the internet. Lifting the sheets one by one, he spoke in his soft voice, saying, "all the evidence is here."

The Islamic studies professor had driven hours from the university to present this information.

"So far, the information that I have is that the American government is behind Boko Haram because the CIA is behind it," he says. He begins to call names - Patrice Lumumba the slain Congolese freedom fighter and Libya's Muammar el-Qaddafi.

"They were all killed because they refused to follow the tune of the CIA," the professor explains. "They want to control the world behind the shadows. It is the American government that gave the information to the world that Nigeria will disintegrate by 2015 and since then, we started seeing signs, reasons and evidences of disintegration."

Hassan is not alone in his beliefs.

What former U.S. Ambassador to Nigeria, John Campbell describes as an "urban legend widely believed in Nigeria" is actually a misinterpretation of a 2005 "Mapping Sub-Saharan Africa's Future" report summarizing a US National Intelligence Council-sponsored conference of African current affairs analysts discussing trends on the continent, including a hypothetical scenario of Nigeria as a failed state. But the report, which many Nigerians have not actually seen but simply heard about, boldly states in the footnotes, "Discussion paper-- does not represent the views of the U.S. government."

Nonetheless, Hassan says many of his colleagues, mostly Muslims from northern Nigeria, at the university where he teaches share a similar view that a U.S.-led fight against Islam has forced its way into Nigeria in the guise of thugs, Christians and jobless youth donning the name Boko Haram, the amorphous sectarian terrorist organization.

"Many Muslim Northerners firmly believe that Boko Haram is a Christian ploy to justify a religious partition of the country and a U.S. military intervention in order to seize Nigeria's oil fields in the south," writes Marc-Antoine Perous de Montclos, a researcher on armed conflict in sub-Saharan Africa, in a 2014 publication released by the London-based think tank, Chatham House.

Ask Hassan why would the CIA organize Boko Haram in Nigeria and he will respond with two solemn words: resource control.

Despite interruptions in output due to bunkering and pipeline vandalism, Nigeria is still the largest oil producer in Africa. A rebasing of the economy placed Nigeria's economy as Africa's largest, coming in globally at 26. Yet, abject penury still grips a bulk of this vast population.

Since 2002, Boko Haram (whose real name is Jama'atu Ahlis-Sunnah Lidda'awati Wal Jihad) has evolved in the midst of this impoverished reality that props up another school of thought behind the roots of this homegrown extremist network.

Secretary of State John Kerry has blamed poverty for Boko Haram's ability to recruit, saying that "much of this challenge comes out of this poverty where young people are grabbed at an early stage, proffered a little bit of money."

But the fact is, poverty thrives throughout Nigeria so why did Boko Haram develop in the North? Where is Boko Haram getting money to buy the weapons and the armored tanker that appears in the background of their amateur videos? And just how many Boko Haram fighters are there? And what happened to the police officers, the women, the boys, the girls who have been disappeared in the hands of Boko Haram over the years? And why did Nigeria's Senate recently approve President Jonathan's request for $1 billion for defense and combat equipment when the $5 billion defense budget seems to have done little to eradicate Boko Haram? There are no answers to these popular questions.

It's the lack of credible information from official security sources within the country and unresolved past conflicts that has helped to trigger a low in the national morale unseen since the Nigerian-Biafra Civil War of 1967 - 1970. Nigerians largely feel that they are not getting the answers that they need, so they are creating those answers or finding ways to get them.

Widespread mistrust of the federal government and security agents have given rise to speculative suspicions and conspiracy theories. It's not uncommon to hear Nigerians, mainly in the southern region, discussing how the mass abduction of more than 200 schoolgirls was staged by northern politicians attempting to damage the administration of President Jonathan (a Christian Southerner) and render him un-electable for the 2015 general election.

Like the increasing multitude of Nigerians running to Cameroon and Niger for refuge, the mounting heap of questions and conflicting rumors are getting harder to ignore.

"Nothing appears to matter to them except stealing money," says one of the protestors at the daily Bring Back Our Girls rally in one of the high class neighborhoods in the capital, Abuja.

Fellow activists nod in vehement agreement. Only about two dozen had decided to show up to mark Nigeria's 54 years of independence on October 1st. Here, the condemnation of public officials' inability to rescue the remaining 219 missing Chibok schoolgirls is outright, laden with passion.

Mauren Kabrik leads the group with a fiery address. "We keep claiming that Nigeria is the great giant of Africa but Nigeria fails to be greater than Shekau," she raises her fists and clenches her eyes. "Shekau still has our 219 girls."

Because even the alleged death of Boko Haram's leader Abubakar Shekau is being tossed around for debate after a photograph emerged of a murdered man believed to be posing in the name of Shekau. But, a recent video apparently shows the leader refuting claims that the Nigerian army killed him. 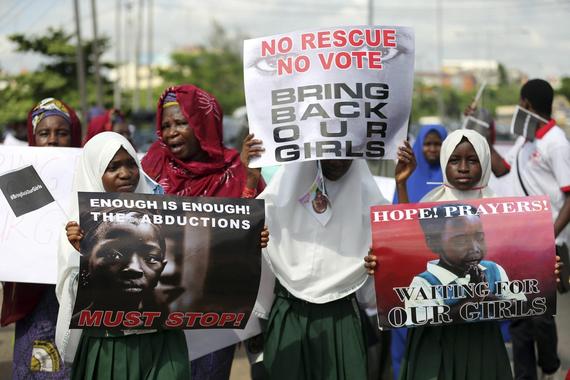 Kabrik joined millions to follow the President's Independence Day. They waited to hear any update on the rescue efforts of the missing girls. But, strangely, President Jonathan did not utter a word about the Chibok schoolgirls in his broadcast, but did say that Boko Haram fighters have inflicted a "crisis of nationhood" that poses a challenge to "our unity as a people."

Nigerian expatriates in cities around the world blasting music at Independence Day bashes, but in Nigeria, the mood was remarkably somber and reflective.

A nonprofit organization director in Maiduguri says she had no reason to celebrate Nigeria's independence.

"The whole town is tensed up," she says. "Any celebration is meaningless as long as we are in this state of anarchy, violence, when IDPs are displaced, food stuff is expensive, schools are closed and there is no hope that schools will reopen because the fighting has closed all the schools."

She's lost many friends and associates to Boko Haram and has consoled many who have fled razed villages. For her, the Boko Haram insurgency has crushed any sense of national unity in Nigeria. "It's only about my religion. My tribe," she says.

The crumbling of national unity provokes one to ponder the possibilities of truth behind the late Nigerian statesman Obafemi Awolowo's often-repeated statement: Nigeria is not a nation but "a mere geographical expression."

In September, President Goodluck Jonathan told the UN Security Council that the insurgents have killed 13,000 Nigerians.

An Amnesty International report released in August, revealed photographs and footage implicating human rights abuses committed by the Nigerian armed forces. Nigeria's defense spokesperson, Chris Olukolade called for investigations into the allegations, but the call has done little to bolster public support for the government's fight against Boko Haram.

There is a desperation for answers, some sort of revelation to the who and what and why of the looming Boko Haram menace. Popular radio DJs and newspaper columnists feed the national appetite with half-baked truths and loaded accusations targeting former and present elected officials. Local news outlets are copying and re-copying articles and editorials referencing an Australian Anglican cleric who allegedly mentions the names of high profile Nigerians sponsoring Boko Haram.

The country is torn along regional, religious and ethnic lines with differing groups holding on to various theories about the forces behind Boko Haram. That's why Priscilla Achakpa, the director of a women's empowerment nonprofit organization in Abuja decided to distribute flyers with phone numbers of security officials to call in the case of any suspicious activity.

"We don't have any other country than Nigeria," she says.

"The truth about it is if you don't trust your soldiers then you are indirectly saying that your country is at war. They are also affected. They have their families and their wives. They have left all this to be at the forefront of this fight. We need to encourage them."

The federal government says the nation is winning the war on terror. But Chibok-native and activist, Allen Manasseh scoffs at any such claim.

"Winning which war on terror?" he asks.

His 18-year-old sister Maryam is still missing. She was one of the schoolgirls abducted during the April 14th raid at the government school in Chibok.

Two weeks ago, Manasseh was finally able to talk to his friend who, along with dozens of others, fled to the mountains along the Nigerian-Cameroonian border to escape Boko Haram fighters who had invaded their town. "My friend told me that six of his uncles were just killed. They cut all their heads off. Do we get this in the media? No we don't," Manasseh yells.

The uncles had climbed down the mountain, hoping to sneak back into their homes to find food when they encountered the militants.

The truth is seemingly evasive in Nigeria. The last time Manasseh saw his sister was two months before the mass abduction in April. They had attended a cousin's wedding together. He says he hardly sleeps these days. He usually finds himself awake before the sun rises, just thinking about her.

He takes a deep breath and says, "You try to get information in the news about these missing girls and and all you hear are lies."