By Tim Cocks and Bate Felix

ABUJA, March 29 (Reuters) - Confusion and violence blighted Nigeria's tensest presidential election since the end of army rule, with the opposition rejecting results from a turbulent southern state even before they have been announced.

The opposition All Progressives Congress (APC) in Rivers state accused supporters of President Goodluck Jonathan of being behind killings of its campaigners, and denounced the vote there as "a sham and a charade."

Dismissal of the vote in Rivers - a center of the Nigerian oil industry - raises the prospect of a disputed national outcome and the risk of a repeat of violence that erupted after the last election in 2011, when 800 people were killed in the mainly Muslim north.

Voting in Saturday's election was extended into Sunday at a relatively small number of polling stations after technical glitches hit voter ID machines.

Witnesses said Islamist Boko Haram militants killed more than a dozen voters, while at least two people were shot dead in the oil hub of Port Harcourt, the biggest city in Rivers state which has a long history of political thuggery.

The vote pits Jonathan against former military ruler Muhammadu Buhari for the favor of an electorate divided along a complex mix of ethnic, regional and in some cases religious lines in Africa's most populous nation.

It is also the first election since the end of military rule in 1999 in which an opposition candidate has a serious chance of unseating the incumbent.

Buhari's APC reported violence in Rivers state. "Armed militias ... have intensified their killing of APC members. Scores have already been killed," it said in a statement, accusing Jonathan's People's Democratic Party (PDP) of being behind the deaths.

"Whatever trash will (be) announced as the result of today's election is not acceptable to us ... (it is) a sham and a charade," the APC concluded.

PDP officials did not respond to a request for comment and it was not possible to corroborate the claim independently.

Islamist insurgents launched several attacks on voters in the northeast on election day, killing three in Yobe state and 11 in neighboring Gombe, including an opposition parliamentary candidate.

The militants, who are trying to establish an Islamic caliphate, reject democracy and their leader Abubakar Shekau has threatened to kill voters.

A string of military victories by troops from Nigeria and neighboring Chad, Cameroon and Niger has reclaimed much of the territory the Islamists controlled earlier this year, but they retain the ability to mount deadly attacks on civilians.

Voting was beset by problems from the start as officials turned up late and biometric card readers, introduced to prevent the vote-rigging that has marred previous polls, failed to work. Even Jonathan had to wait 40 minutes.

Electoral commission spokesman Kayode Odowu said just 350 polling stations out of 120,000 were still voting. "You can't say that is too sizeable," he said, adding that results would be collated within 48 hours of the polls closing.

Anybody who announced results before the commission would be breaking the law, he added.

Turnout appears to have been high, and with up to 56.7 million voters to process, results could take a while to collate.

Buhari and Jonathan have appealed for calm and signed a "peace accord" on the eve of the vote, but many Nigerians still fear a repeat of the post-election violence that erupted in 2011, when Jonathan defeated Buhari.

"The danger is post-election," former Malawian President Bakili Muluzi, who is leading a Commonwealth observer mission, told Reuters. "We've been assured by the peace accord between the leaders but how that trickles down is the danger." (Additional reporting by Abraham Terngu in Abuja, Julia Payne and Tife Owolabi in Port Harcourt; Editing by Stephen Powell and David Stamp) 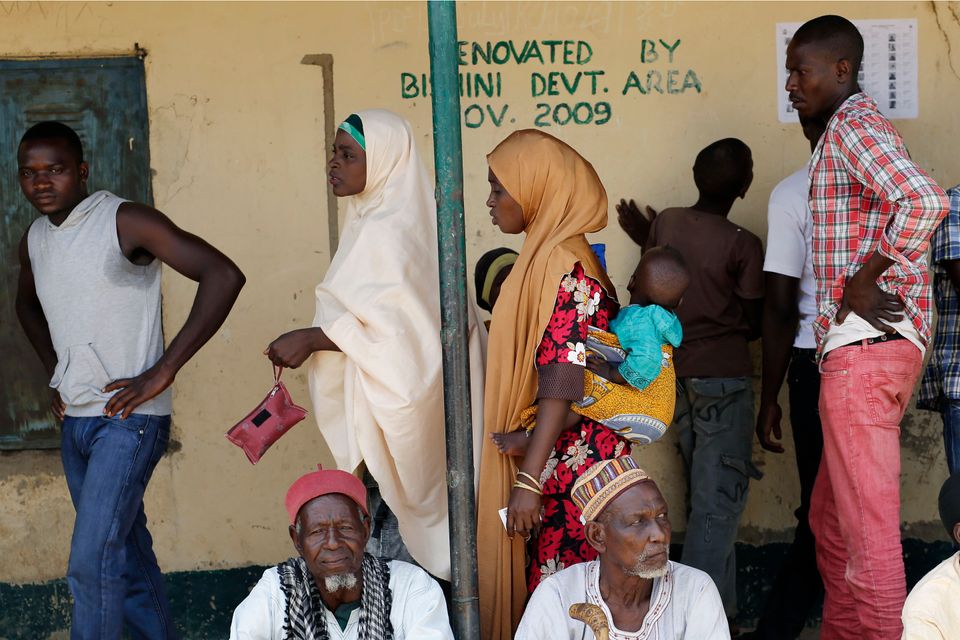