MAIDUGURI, Nigeria, June 2 (Reuters) - A bomb blast at a busy meat market in the northeastern Nigerian city of Maiduguri on Tuesday killed about 50 people, an eyewitness and hospital sources said, in an attack that bore the hallmarks of Islamist Boko Haram militants.

Boko Haram has killed thousands of people and displaced some 1.5 million in an insurgency to establish an Islamic caliphate in the northeast of Nigeria but appears to have lost most of the territory it seized to government counter-offensives this year.

The bomb, which was concealed under a butcher's table in the market, went off at around 1 p.m. (1200 GMT), killing shoppers and passersby, a military source said.

There was no immediate claim of responsibility for the attack, which followed two weekend bombings that killed at least 30 people and appeared to be the handiwork of Boko Haram.

Meanwhile, a video purporting to show Boko Haram militants and featuring an unidentified hooded speaker was posted on social media websites on Tuesday. 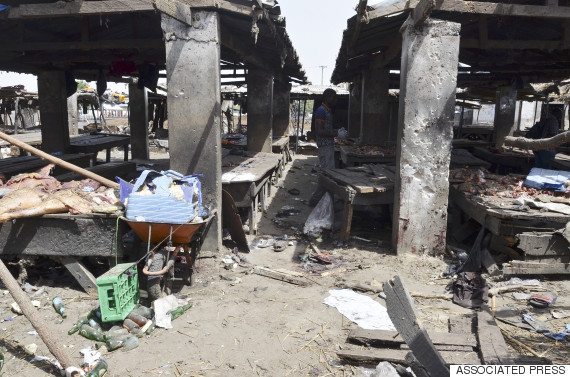 A man inspects the site of a suicide bomb attack at a market in Maiduguri , Nigeria, Tuesday, June 2, 2015. (AP Photo/Jossy Ola)

The speaker accused Nigeria and three adjacent states that have combined to fight the Islamist militants - Niger, Chad and Cameroon - of lying about recent military successes that they said had pushed the jihadists back into a rural pocket.

"Most of our territory is still under control," he said.

"Whoever believes that the Nigerian army has defeated us.... know that we have battled against them and killed them," he added in a 10-minute video that featured blood-soaked corpses.

The film included footage of what appeared to be pieces of a Nigerian jet. "President of Nigeria, here are your goods," says a militant in the video.

Goodluck Jonathan's presidency ended with the inauguration on Friday of successor Muhammadu Buhari, who has pledged to wipe out Boko Haram. 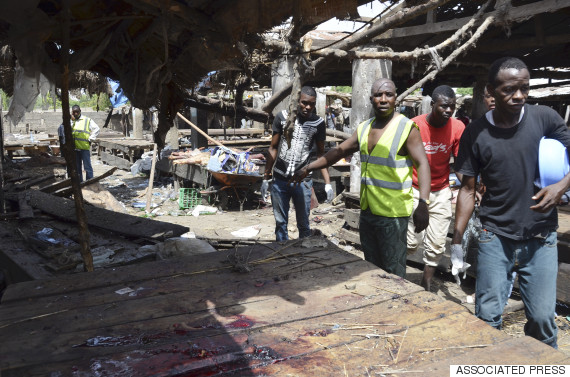 Rescue workers at the site of a suicide bomb attack at a market in Maiduguri , Nigeria, Tuesday, June 2, 2015. (AP Photo/Jossy Ola)

It was not possible for Reuters to verify the video's authenticity or date.

In the aftermath of the latest Maiduguri blast, paramedic Lawal Kawu said 31 charred bodies had been evacuated to the teaching hospital in Maiduguri, and several other people were brought in with severe injuries.

"It shook our school building and I had to run away. I saw military vehicles with soldiers moving toward the area," Abubakar Mohammed, a college student who was a few meters away from the blast scene, told Reuters.

Boko Haram appears to be returning to guerrilla tactics since losing territory gained in 2014 to offensives by Chadian, Nigerien and Nigerian troops over the past few months. It maintains a last stronghold in the Sambisa forest reserve. (Reporting by Lanre Ola in Maiduguri, Isaac Abrak in Abuja and Alexis Akwagyiram in Lagos; Writing by Chijioke Ohuocha; Editing by James Macharia)