Nigerian Christians are fearful that practicing one of their religion’s most sacred rites might lead to death by Ebola.

In response to the spread of the deadly virus, prominent Nigerian churches have asked parishioners to stop taking the Communion elements in the mouth and refrain from shaking hands as a ceremonial sign of peace.

Nigeria’s Catholic and Anglican churches issued statements in August asking priests to deliver communion elements into parishioner’s cupped palms, instead of placing the wafers on the tongue. The churches also approved the practice of “intinction,” or dipping the communion wafer into the cup of wine before placing it in the mouth.

"Let us state clearly that the reception of communion-in-the hand neither affects the validity, sanctity, dignity and divinity of the Eucharist nor vitiates the full effects of this Sacrament on its recipients," the Archbishop of Lagos, Alfred Adewale Martins, said in a statement.

Shaking of hands during the rite of peace would similarly be discouraged until the Ebola scare is over, the Catholic Archbishop of Abuja announced.

"Many people are not comfortable with shaking people they don’t know during this period of Ebola," Archbishop John Cardinal Onaiyekan told Punch.

Despite the official orders, some faithful Christians are still choosing to receive the elements in the mouth, Nigeria’s Guardian newspaper reports.

An investigation by the newspaper found that some priests were still using their bare hands to deliver bread and wine in the mouth. Medical experts have advised priests to wear gloves during the ceremony and use disposable cups to distribute wine.

In fact, the Catholic Archdiocese of Lagos recently assured parishioners that priests could respect the wishes of those who wanted to have the communion wafer placed inside their mouths.

“Those faithful who approach the altar and desire to receive Communion on the tongue should be given accordingly. Their personal devotion to the Eucharist must be respected,” the Archdiocese said.

The Ebola virus spreads through direct contact with an infected person’s body fluids, the AP reports. Health experts have not approved a vaccine or treatment that can cure the sickness. 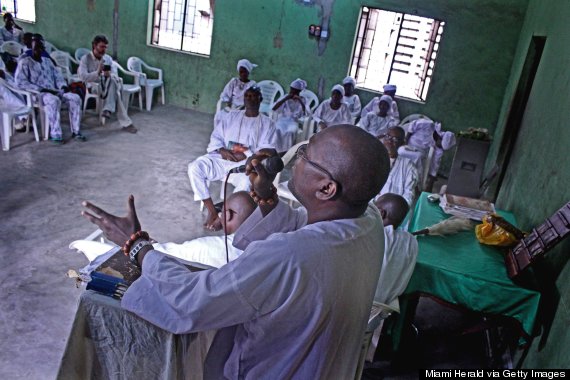 During a communion service at St Paul Anglican Church Oke Afa in Lagos yesterday, the Guardian noted that the number of people who came to the altar to receive the Eucharist had dropped drastically.

Rivers State Governor, Hon. Chibuike Amaechi, has urged religious leaders at churches and mosques to spread the facts about Ebola.

“We are discouraging people who have Ebola from going to Church. You know why? Church is a place that you have a large crowd of people. If you touch one person or two persons, you are contaminating the environment and the people, and they may get infected,” Amaechi told ThisDayLive.

The politician also cautioned religious leaders against trying to cure people with the disease.

“First, don’t heal them for us, don’t touch them for us, just call us, we will come there and in six hours after examination of the person, we will get the result and treat the person accordingly,” Amaechi said.

1 / 7
2. China Has Huge Population Of Religiously Unaffiliated
The number of religiously unaffiliated people in China alone is more than twice the United States' total population. About 700 million Chinese residents do not identify with a specific religious group.