WASHINGTON -- The world has been mourning the almost 20 people killed around Paris on Jan. 7 and 9 in some of the most vicious radical Islamic terror attacks in Europe in recent years. The horrific assaults prompted displays of solidarity for France and an international conversation about whether Europe is prepared to confront homegrown extremism.

But far from France -- in countries including Mali, Pakistan, Lebanon and Somalia -- there were at least 12 other terrorist attacks that week. These atrocities received far less attention, though they left at least 85 people dead and about 186 wounded.

Perhaps most jarring is what's happening in Nigeria.

As many as 2,000 people were slaughtered in Nigeria from Jan. 3 to 7 -- most of them women, children and the elderly who could not flee fast enough when Boko Haram invaded the country's Baga region. Amnesty International released a statement on Jan. 9 saying the Baga massacre could be the militant group's deadliest attack ever.

"In the United States we really don't pay much attention to the rest of the world period, but we identify more with Europe," she told The Huffington Post, explaining why the French attacks received so much more attention than others that week. "We have a much lower expectation on parts of the world that are not as economically developed."

Last week, she released a statement condemning attacks by Boko Haram. She told The Huffington Post that terrorism in one country -- if allowed to get out of control -- can spread to others.

"The terrorists in France were inspired by terrorists from another country," she said. "The very same thing can happen here -- that's aside from the fact that anytime 2,000 people are killed in a couple of days, everybody in the world needs to be concerned."

Al Qaeda's Yemen branch, which carried out two of the 12 other attacks, has taken responsibility for the French attacks. One of the gunmen who carried out the assault on Charlie Hebdo's offices in Paris expressed support for the Islamic State, as did Abubakar Shekau, Boko Haram's leader.

Western news outlets have been criticized for not giving as much attention to terrorist attacks that have happened in places such as Nigeria. Hashtags like #Nigeria2000, #BagaTogether and #IAmBaga have been coupled with #BlackLivesMatter by a number of Twitter users to highlight where the media's focus is.

J. Peter Pham, director of the Atlantic Council's Africa Center, said Westerners are less likely to pay attention to events happening outside the Western world in large part because of the lack of visuals available to them.

"We live in an era where if you don't have video of something, it doesn't lead off the story," Pham said. "Paris is a media capital. All the major media have either access to studios there or permanently posted correspondents. Something happening in Paris is going to be covered around the clock."

Sentiments like this play into what Sarah Oates, a journalism professor at the University of Maryland, calls the "dance" between what journalists want to supply and what audiences demand.

A recent Pew Research Center survey found that most of the terrorist attacks that attracted American attention from 2001 to 2015 occurred in Europe. Around 29 percent of Americans said they followed the Paris news very closely, compared with 48 percent for the 2005 bombing in London and the 2004 killing of children in Russia by Chechen rebels. Only one African incident -- the 2013 attacks at a mall in Nairobi, Kenya -- made the list of the top nine. 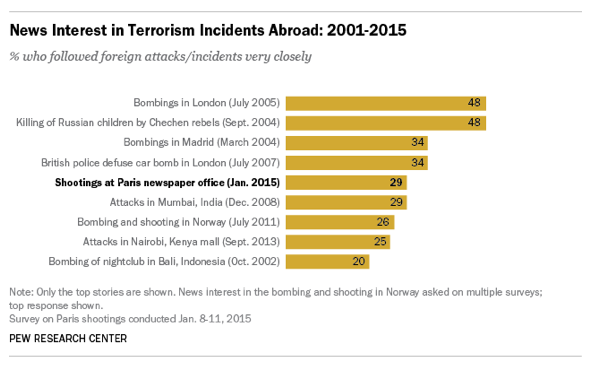 Mainstream media coverage of Africa has mostly shown a succession of famine, conflict, disease, humanitarian crises and genocide, Pham said. Though he is hesitant to accuse the media of racism, Pham believes there are racial elements to the lack of coverage.

"There's an implicit double standard. When do media report from Africa? It's not when there's a good story to tell," he said. "With the exception of [a] once in a generation good news story -- for every Nelson Mandela or Desmond Tutu profiled and held up as a hero in the media, you've got by the dozen the Joseph Konys and Robert Mugabes of the world."

Bass said the coverage of tragedies in Africa, Asia or Latin America is comparable to that of shootings that occur in America's inner cities. Crimes in poor, black, urban neighborhoods, for example, generally don't get the same attention that shootings in more affluent suburban areas do.

Studies show journalists do attempt to push media consumers out of their comfort zones, Oates said, but readers are often resistant.

"Westerners have a hard time identifying with people in Africa," Oates said. "On the upside, it's not like they're considered an enemy, but on the downside, they don't get a lot of attention since they're neither friends nor enemies -- we don't write about them. They're not dramatic, [and] that's not interesting."