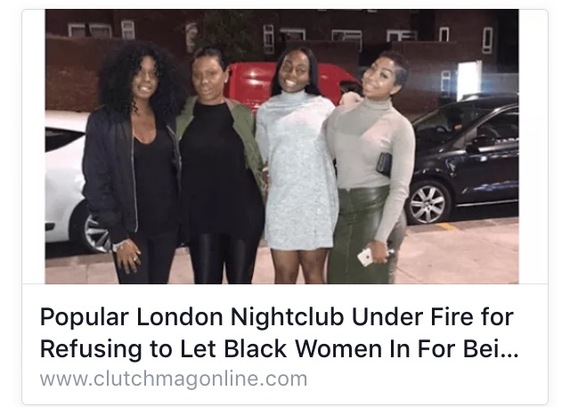 Like the rest of the beautiful, brown, bronzed and melanin blessed North American population, I read the article about the four equally blessed girls who did not get into the DSTRKT Night Club, and I felt the proverbial ouch -- the pain of not being good enough. I know that feeling all too well and felt outraged for them. It's a punch in the gut when it happens because you think, that happens to other people, that you are good enough, so when it happens to you, then you realize it's not right and shouldn't be happening period. But sad to say, as aware as I am of it, I still submit myself to the process, not as often as before, but, yes, if I am honest with myself, I still do this. How deep does this need for approval and acceptance run, I haven't a clue, but I soothe myself with the belief that now that I am aware, it will eventually taper off and I won't do it at all. That still remains to be seen, however.

I read somewhere that one of the girls wrote stuff about light skin being better or some nonsense to that effect. I don't know if it's true or even if I believe it, but if it was, this may have been her wake-up call: the fact that her friends were hurt by the incident may definitely have had an effect on her, thus encouraging her to reconsider her thinking. Life is strange like that.

As a club owner or promoter, I don't know how I would feel either and I am trying to put myself in their shoes here. If I owned an establishment, would I want people to tell me who can and cannot come into my place? I honestly don't know. I would hope I would not limit entrance to skin color or body size, but if I had to screen folks for entrance, I would hope it would be with regards to behavior if it had to be done. I would try to focus more on the vibe or feel of the venue's crowd, rather than the look of individuals, but who's to say? I mean, the whole thing is just messy and happens worldwide not just in London. I just wished it happened less or that we women opened and ran our own night clubs, so we didn't subject other women to such appalling treatment. We could say eff those guys and their ridiculous standards; we have our own places to party where the men have to meet our standards. (I kid, I kid about the men meeting our standard; that wouldn't be nice either).

Anyway, if wishes were pennies, I guess I would be rich by now, but a girl can still dream can't she? And if it's one thing I believe in it's dreams coming true. Yes guys, I am a dreamer by and large, and I have great hope for the future and the upcoming generations, that they will not only value the physical looks of an individual, but also the essence, spirit and heart.