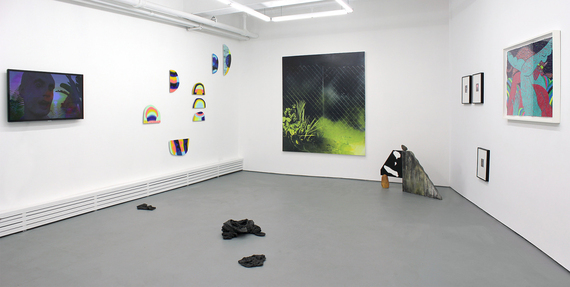 In a time of galleries and museums that just can't resist attempting another (better!) stab at resolving the issues of our new digital, image-saturated world, reading another wall text about the Internet becomes exhausting. The most interesting artists and curators working now have tossed their iPads aside and become more interested in a life--and an art--that represents a distillation of the digital age, not a constant concern with it. Which may be because that's actually how we live our lives.

In any case, the latest and current show at Tiger Strikes Asteroid gallery in Bushwick is one of the rare gems that's tunneling it's way through and out of these already aging ideas, while still acknowledging The Digital. Titled Night Flight, after the 80's insomniac basic-cable hodgepodge show, curators Jackie Hoving and Norm Paris have noticed that: "a precondition of our modern waking life is the onslaught of information and images, infinitely shared. What then occurs in the night? Do you fall asleep to the cool light of the computer screen?"

Hoving and Paris consider the option to discuss the Internet, but decide to sleep on it instead. The show operates successfully under the conceit: balancing nocturnal paranoia with subconscious excitement.

Brightly lit, Night Flight feels like somebody flipped on the light switch inside the urban collective (sub)consciousness. It's a cognitive inversion of the same, cluttered, tagged streets of Bushwick that lie just outside the gallery's walls. Greeted by Angela Dufresne's washed out monotypes of a candle lit Ivan The Terrible, we're already back in that weird dream that you have sometimes that's not a nightmare, but decidedly not great. Jude Tallichet's pseudo-detritus, pitch-black, cast-stone sculptures absorb the gallery's light from the floor, daring you to try to throw them away. Tom McGrath's "not-spray-paint painting" hits you from across the room with its night vision green. Johannes DeYoung's video Ego Loser tosses you into a mesmerizing, dubiously Freudian dreamscape, and is complemented gallery-opposite by Benjamin Degen's colorful coital reverie. 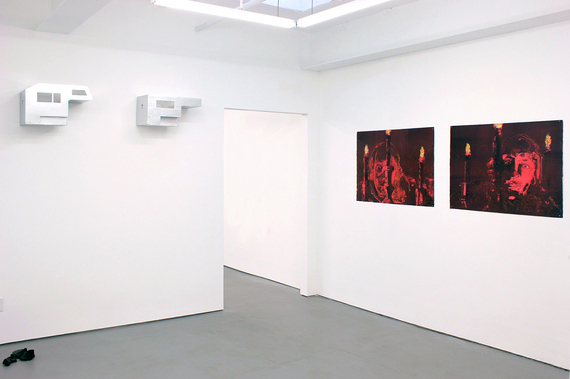 Night Flight is a great, timely show that succeeds without crumbling into another contemplation on the Internet. Go check it out, and bask in the reflected glory of a show without any GIFs.

Night Flight runs from May 22-June 28 at Tiger Strikes Asteroid, 1329 Willoughby Avenue #2A Brooklyn NY 11237. Hours: Saturdays and Sundays 12pm-6pm and by appointment.