In what is becoming a New York tradition, the legacy of Judy Garland will be celebrated with an evening of eclectic performances honoring lesbian, gay, bisexual and transgender (LGBT) youth.

Acknowledging that the evening's set will comprise both classic tunes and lesser-known material from the Garland songbook, the participating artists were nonetheless tight-lipped about the specifics of their performances; last year's show featured nods to Garland's seminal 1961 Carnegie Hall concert as well as her starring roles in "Meet Me In St. Louis" and, of course, "The Wizard of Oz." Still, they nonetheless praised Garland as being more than just a stage and screen icon with the troublesome private life.

Check out the poster for "Night of A Thousand Judys," then scroll down to keep reading: 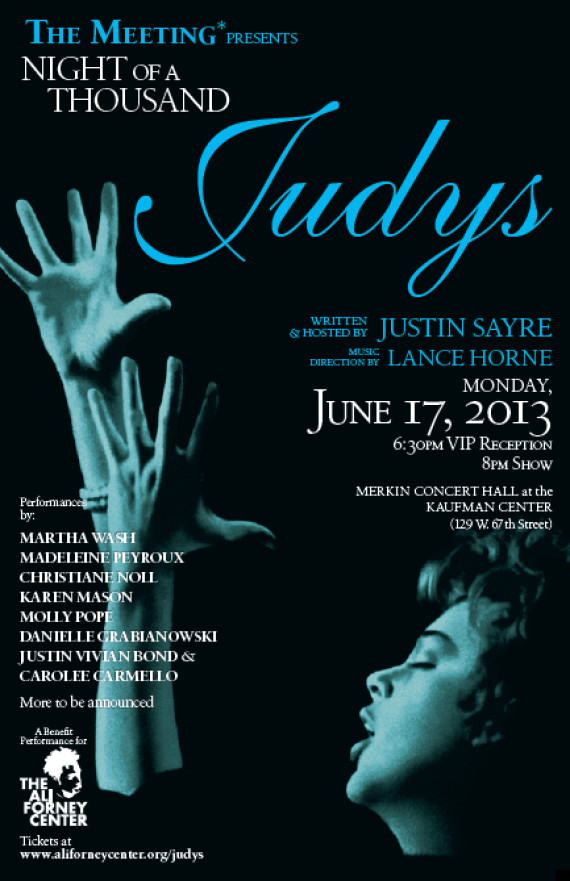 "She wasn’t the kind of performer who teared up or was over-the-top about her emotional demonstration, but there was something so heartbreaking about her performances when she was singing about love and relationships," Carmello says. The Tony nominee believes Garland's much-publicized, behind-the-scenes turmoil only adds to the enduring myth: "Performers who have their own personal struggles outside of their stage persona are appealing to people who are struggling themselves because they see in that person a way to rise above. They feel a personal empathy from that performer."

Added Leung: "Like many artists, Judy sought refuge from her personal life through the performing arts ... the best performances are an escape, so I think everyone can relate to that."

As in previous years, "Night of A Thousand Judys" -- which is a special presentation of New York-based actor, writer and performer Justin Sayre's variety show "The Meeting*" and timed to coincide with Pride month -- will benefit the Ali Forney Center, a New York advocacy group dedicated to homeless LGBT youth. New to the event this year is an auction of artwork based on Garland, which includes pieces donated by Charles Busch and Tommy Tune.

Sayre says his passion for Garland herself, who he deems the ultimate "comeback kid," is matched only by his dedication to the cause at hand, which is more relevant than ever following what appears to be a spate of disturbing attacks targeting the city's LGBT community.

"I really hope it's a great Pride event to show how proud we are of everything the Ali Forney Center does," Sayre says. Though he points to the show's emphasis on "honoring who Judy was and what she represents," he adds, "Homeless LGBT kids can be such a target for violence ... we're all under attack right now and we really have to watch out for our kids, because our kids are really the most vulnerable."

Check out 18 of Judy Garland's most legendary performances below:

Judy Garland's Legacy Honored With 'Night Of A Thousand Judys' In NYC
Judy Garland&#039;s Greatest Moments
1 / 16
'Over The Rainbow' (1939)
It's hard to imagine now, but "Over The Rainbow" was almost cut from "The Wizard of Oz" because MGM officials felt it slowed down the pace of the movie. In addition, Shirley Temple was the original choice to play Dorothy, but 20th Century Fox refused to lend her to MGM.