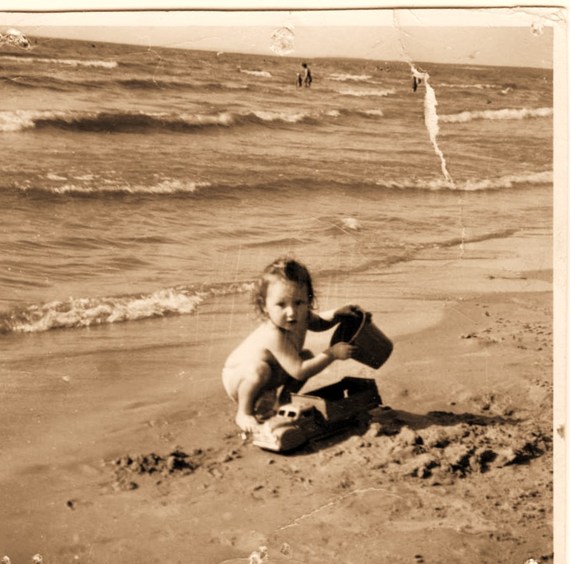 I was a girl of nine the night I rode shotgun alongside my father in his tractor trailer.

He worked for British American Oil Company (B/A) then, driving those big eighteen wheelers with a sleeper compartment for the driver up front.

The hauls were long, up into northern Ontario, and there was not much heat in the cab in those days. Because of some bizarre safety regulation no radios were allowed either.

As a youngster I was intrigued by all of it. I went over to the truck yard regularly to watch Dad head out on another of his overnight trips. My habit was to run after his truck around the town's lake shore for as long as my breath lasted, listening to the customary sounds as he churned through the gears, then watching his truck until it disappeared from sight.

There were ten gears in total, I remember: two sets of five. Pushing a button atop the stick shift allowed for switching between sets. I asked a lot of questions; that's the kind of child I was. In turn, my father explained to me in patient detail how things worked.

I lived in hope of accompanying him on one of his nighttime runs into the hinterland north of us. But I was stymied by a very real impediment: His employer provided no insurance for passengers in those days. Thus, accompanying him was forbidden.

Now and again I climbed up into the front seat of the rig when it sat idle, barely able to see over the dashboard. I tried imagining what it would be like to be on the road headed out of town together, in our lofty perches side by side, me offering trip commentary.

"Please, Dad, please!" I begged. "Let me come with you just once. I will be quieter than a little mouse. No one will ever know."

My persistence finally paid off. Or maybe it was just my father's sense of adventure that came to the fore. Either way he sat me down one day and asked if I was still up for joining him on a roadie. But not just any roadie. One that would involve subterfuge and a late night meeting.

Naturally I squealed yes! He went on to explain his plan. I was to be waiting at a designated spot on the highway outside of town at exactly nine p.m. on the prescribed evening. My father would announce his truck's approach by flashing his lights twice in quick succession. Then he'd pull the rig on to the shoulder up ahead.

Our plan had to be glitch-free. Remember, this was before cell phones and texting.

I couldn't sleep the night before. I was beside myself. Naturally, I couldn't tell anyone. My father's job may well have been at stake. Only my mother knew. When I think of it now she was incredibly brave to let me go.

I packed us lunches for the long drive and for Dad a thermos of his beloved orange pekoe tea with lots of milk and sugar.

I wore all black. I topped this fetching cat burglar ensemble with a black toque, my red braids tucked up underneath. Even at that tender age I had an acute sense of occasion and an abiding appreciation for drama.

I was at the highway an hour early for our rendezvous. The temperature had dipped on the cold November evening, but it mattered not. I was resolute, only the whites of my eyes visible as I peered at the oncoming traffic awaiting his arrival. Finally, I spotted a rig that looked like his on the bend ahead. Then I saw lights flashing. He was here.

As his truck passed in a thunderous roar I heard him start to gear down and began running to meet him. It was actually happening, finally!

I stood by the truck until he came around and hoisted me up into the passenger side. He sat me atop a pillow he had brought for me which allowed me to have a clear view of the road ahead. No such things as buckling up in those days: seat belts were years away.

"Ready?" he asked, reaching over and patting my knee. I nodded eagerly, stunned with excitement, my heart racing.

And we were off. Our route that night included deliveries to several gas stations. At each one I watched my father use a long dipstick to measure the amount of fuel in each underground tank. He moved quickly - it had grown bitterly cold - and it seemed to take forever for the massive tanks to fill. But he went about his work without a word.

Only a couple of the stations were open that late at night. I remember one had a small restaurant and Dad suggested we go in for a snack. We were the only customers. The waitress giggled when she saw me stroll in alongside my dad, a little girl all in black, my toque on my head. We sat at the lunch counter. My dad ordered coffee and a piece of pie. I was too excited to eat.

The lady was so friendly but I realize now she was probably thrilled to have company. She asked my name and where I was from. I told her it was my first such road trip but I hoped there would be more. I looked at my father as I said it.

She announced it was the first time in all her years she had seen a truck driver bring along his daughter on a trip. A couple of sons, yes, but no girls. She couldn't have said anything that would have delighted me more. Her name, I remember, was Alice. At the cash register before leaving she handed me a Kit Kat Bar.

"On the house, hon," she said, winking. I watched her leaning against the counter as we pulled out, sipping her coffee and staring into space.

To pass the time on the drive I sang songs and performed my ongoing stock of impressions. His favorite was the one of our irascible next door neighbor, a crotchety old woman named Wilma. He intermittently quizzed me with math questions and rapid calculation challenges, as was his habit. I felt like I was in heaven. I nodded off once and awoke with a start. My father reached over and patted my knee.

I remember vaguely Dad stopping for cat naps along the way but he had announced up front he preferred to push through to get us home earlier. He seemed tireless to me in those days.

When we finally returned to our starting point it was late morning the next day. I wasn't the least bit sleepy. My dad came around and helped me down from my perch. As he pulled away he sounded the deafening horn just for fun, and waved at me out of his window for the longest time. I watched his truck move farther and farther down the road before disappearing around a bend.

I could still hear the now familiar gears changing under his strong hands.

The photo of me atop at three years old is witness to my lifelong affinity for trucks.

More:
healthy livingfathers and daughtersgrowing upFamily TravelParenting
Newsletter Sign Up
The essential guide to taking care of your mind and body
Subscribe to HuffPost’s wellness email
Successfully Subscribed!
Wellness delivered to your inbox