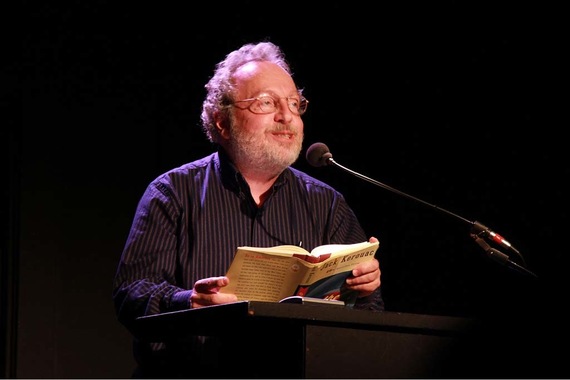 Gerald Nicosia is probably better known for his non-fiction -- Memory Babe is still the major work on Jack Kerouac, and his Home To War is a major opus on the Vietnam War -- but he also is a real poet, very much in the San Francisco tradition of Ferlinghetti, Patchen, Rexroth and Ginsberg -- except those guys are now mostly gone.

I was amazed at how viscerally I reacted to the cover of Night Train to Shanghai And Other Memories of China, showing a train track running within inches of worker's hovels, in a place that looked like all the other dreary places on Earth from Camden, New Jersey to Downey, California. 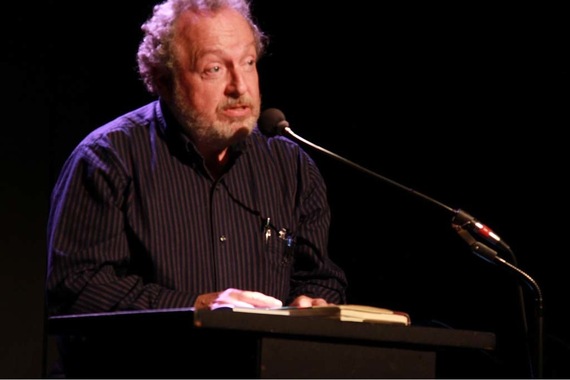 Of course looking to the East was the hallmark of the Beats in the fifties, who thought the wisdom from the other side of the globe much surpassed our own. For many of us children from that era, China was the land at the other end of the hole we sometimes tried to dig in our suburban front yards. Nicosia looks at China through those eyes he might have had climbing out the other end of the tunnel for the first time. This slim book of poems is better than a thousand long-winded pieces of journalism -- he makes the East scrutable and real, with all its anomalies.

Nicosia's involvement with China began when he adopted an orphan girl from Hefei named Wu Ji in the mid-1990s. She's now known as Amy. And she's in this book a lot. Nicosia later traveled to Chengdu to guest teach beat poetry to the graduate students at Sichuan University. When his daughter was 10, he took her back to her hometown for a bittersweet reconciliation. Much as William Blake did in America, a Prophecy in 1793, Nicosia paints a nation furiously working, much as America did in an earlier time. It's appropriate that Nicosia was not only deeply influenced by the Beats, but also by the urban voices of his native Chicago, which produced such writers as Nelson Algren and Richard Wright. Perhaps that gives him an advantage in looking at China.

Before we get on that night train from Peking to Shanghai, know that Nicosia's torrent of words will move with the speed of an out-of-control train, whooshing on a metaphoric and terrifying journey into the heart of China.

Nicosia writes about a man called only "the professor," whose love for the magic of words made him a very good translator. "He was small, balding, only of Middling looks, and knew he would not succeed in commanding men or women with his physical presence," Nicosia writes. The poems then talk of how he found his way in life using the appropriate obsequiousness to the powers that be, which got him a professorship at Sichuan, one of China's oldest universities.

The Professor's specialty was translating modern American poets whom he loved. He didn't particularly love his wife and children, but he had a penchant for beautiful young women which some of his students were. The last "affair" he had was with a magnificent young thing, who told him she would not welcome him on her journey to San Francisco, where she most wanted to go. "You're too old," she said, and then muttered under her breath that he hadn't been that good a translator after all.

The poem so moved me, because somehow it summed up much of the psychology of China, of class and academia there. I asked him if the professor was a real person.

"Yes," he wrote back to me, "I knew the translator. He is dead, so I felt a little freer to write about him, though I changed his name. I prefer not to give his real name."

Some of his poems are about the "Forbidden City" in Peking, a startling series of observations on emperors, dust, what eons do to even the most imperial of dreams, the hard beds that the exalted slept upon without pillows, ruling class hubris and arrogance, the sins of aggrandizement built upon the exploitation of the poor, and the essential fraud Nicosia believes Chairman Mao was in the end.

The journey from Peking to Shanghai is the orgasm of this collection of poems. The train rushes through the night, and Nicosia peers out on the kaleidoscope that is modern "Communist China" -- noting the classes of Chinese who ride the rails are different than those who don't ride trains and planes and cars, and often are homeless. It's between those allowed to sit in the grand facilities at the embarkation point vs. the weary masses outside.

"You feel the rails over which we
Roll with no small pain
And sometimes there are moaning
Groaning screeching sounds like
The Gates of Hell opening up
Beneath you and sometimes more complicated
Clickety-clackings
Rhythms only a great jazz drummer
Could hear and decipher," Nicosia writes.

And he says, in what may be the truest thing he says, "You realize finally
That this whole earth we ride on is just another train,
Human Life moving through the universe."

Earlier I compared this book to Blake's America, a Prophecy. Might this book have the kind of importance Blake's did? In Maxine Hong Kingston's foreword, she writes that journeys through China has always been a staple of knowing China, which "is changing moment by moment." She then says that the real poet's secret is seeing the constants.

Kingston also notes that toward the end of his poems, Nicosia describes how so many Chinese would come up to him, and ask "whether America would try to invade China." Aram Saroyan says "Nicosia brings alive this huge land -- in essence the new America -- as nothing else I've read..." Lawrence Ferlinghetti says Nicosia's poem is "more than poetic memories of China... it's history."

My friend has written a good volume, maybe even a great volume of poetry, in Night Train to Shanghai.
*
Lionel Rolfe is author of a number of books from The Menuhins: A Family Odyssey, to Literary L.A. to The Uncommon Friendship of Yaltah Menuhin and Willa Cather to The Misadventures of Ari Mendelsohn. They are available at Amazon's Kindle Store.