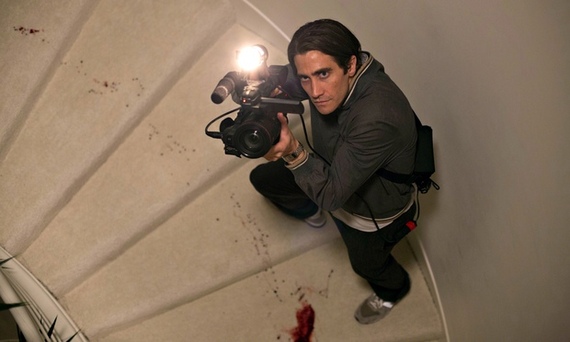 Why do we click the video that says NSFW (not safe for work)? Why must we see the awful clip everyone's talking about?

Nightcrawler, the new film starring Jake Gyllenhaal and Rene Russo, is an excellent ride that takes you to places you don't want to go to, to explore this question. The hero, Louis Bloom, expertly played by Gyllenhaal, is the trainwreck you can't stop watching.

I had the good fortune to talk to Dan Gilroy, the writer and director of Nightcrawler, an unusually powerful movie.

It came piecemeal over a long period of time. I was interested in a crime photographer from the 1930s called Weegee, the first guy who put a police scanner in his car. Then I heard about the modern equivalent out here -- the nightcrawler or stringers with hundreds of scanners who drive at 100 miles an hour for a story -- and I became more interested in an anti-hero story.

Gilroy says he and Gyllenhaal spent months rehearsing, exploring and penetrating his character. "We approached Lou like a nocturnal animal who comes down from the hills at night like an animal to feed. Jake thought of him as an artist. I thought of him as a child. We both thought the character had great innocence."

But this child doesn't really understand right from wrong. Particularly as his bad behavior is increasingly rewarded.

It's hard to write something significant, and harder still to find the performer who can then make those ideas uniquely his own. Jake Gyllenhaal gives the performance of his career, and that's saying a lot in the overhyped world of Hollywood, but it is nonetheless true.

Part of his powerful performance is how he changed his appearance. The usually handsome Gyllenhaal is now way too thin, seemingly hollow, barren, hungry.

"He was hungry," says Gilroy. "It was Jake's idea to lose the weight. Jake lost 30 pounds; he thought of himself as a coyote, the predator moving in these empty open spaces at night." They shot 28 days, 23 of them at night. "The look, he never ate enough, he ran to the set each night which was eight or 10 miles and then shot for 12 hours, so he really was lean, hungry," says the impressed director.

To craft a character that always makes the wrong choice but nonetheless moves ahead is challenging artistically. It goes against the normal grain of storytelling. "In every studio film the character has some flow and he's made a better person. Not here," says Gilroy.

And it makes you think. How far would you go in the wrong direction to achieve success? Regardless of where you draw your line, the character of Lou keeps crossing it, and that's when you start cringing. "There's no question he's the smartest person in the room all the time. That's how Jake played him," says Gilroy. "What's interesting is that the character has no arc; he's changed nothing about himself, but the world bends around him."

And the results are chilling, as smart and decent are stellar opposites in this universe.

Tony Gilroy, Dan's brother and well-known for writing the scripts in the Jason Bourne franchise as well as directing The Bourne Legacy; he writer/director of Michael Clayton (which had six academy award nominations), produced and had an interesting observation. He noted that his brother prefers lots of rehearsal time and appreciated how well that worked for this picture. He said his process is different. He prefers less rehearsal time and likes to find moments in front of the camera. While his brother's picture is terrific, he found it fascinating that he couldn't have made this film the way he did. But that's why he was there as producer to support his vision. A third brother, John, was Dan's editor. He has worked with Tony and Dan before and there is definitely a shorthand in their communication.

One quickly sees this family protects themselves and circles the wagons as they defend and support their vision, a rare thing in a town indelicate with their artists.

Rene Russo, who plays a brilliant Nina, the hard as nails news producer who uses Lou's footage for her own success, follows him down a path or moral descent.

"Danny is a sparse writer," says Russo. "There's not a lot of direction on the page for Nina," she said. But not one word of the script was changed before shooting. "She's on a slippery slope down to a new low," she said. "And once she makes that deal... all bets are off." Russo is equally surprising in her performance. What could have been a familiar hard-edged news producer becomes one who's much less sure of herself and much more authentic. "I've never had this, but a few weeks out I still didn't have this character. I was getting a little bit nervous. And then I rehearsed twice with Jake and that was it," she said.

Dan points out that James Newton Howard, the composer, made some great choices.

He went counterpoint with the music. He's messing with the audience's heads. When Lou did something bad -- and there would normally be a sting -- the music is celebration, inspiration, it lulls the audience into a different place. The score is crucial to let us be nonjudgmental.

I'm not so sure we're non-judgmental. We're all dying inside as we watch Lou cleverly leapfrog his way past his peers in predominance by bypassing good taste and a moral code. Yet we watch it just like every other bad thing one watches on the internet, because you just can't pull yourself away. That is what the film is really about. It's an indictment of our own voyeuristic addiction to shock in a culture that seems to have abandoned ethical action for just one more YouTube hit. We can condemn those who post. But let's not forget to implicate ourselves as we become complicit in watching it.

"When your hero is your villain you can make a character story about a psychopath or you can go for a bigger theme," says Gilroy.

I feel there's no more morality in the world. I feel that's the world we're living in. To me that's what the movie's about. I approached it as a success story. Not a celebration. At the end of the film people should go 'the problem isn't Lou; it's the society that creates this character and rewards him.'

Nightcrawler will make your skin crawl and then question why we want our skin to crawl in the first place even as we go back for more.