As the daughter of Indian immigrants who came to this country to pursue higher education, it is not surprising that Shaifali Puri has followed in her parents very motivated footsteps. Shaifali recently sat down with Deepak Chopra for Newswire.fm's program One World to discuss how she began her career and how it brought her to the Nike Foundation.

Shaifali Puri, is now the Executive Director of Global Innovation at Nike, did not leave school and immediately find her way to the career she has now. "I've had a very circuitous path." A Princeton and Stanford grad, Shaifali has worked as a journalist, practiced law and was recognized for her innovative work with Scientists without Boarders; an NGO aimed at uniting scientific and technological resources around the United Nations Millennium Project in an innovative way.

With Shaifali's help, Scientists without Boarders was one of the early entrants into the world of crowd sourcing for social change. Shaifali recognized that innovation does not always come from a small pool of experts; thinking outside the box often starts by asking someone who is already outside. "A lot of insight exists outside of expertise," she told Deepak. "So someone who coming at the problem from the opposite side, or from a completely different side, can often yield that breakthrough pathway." 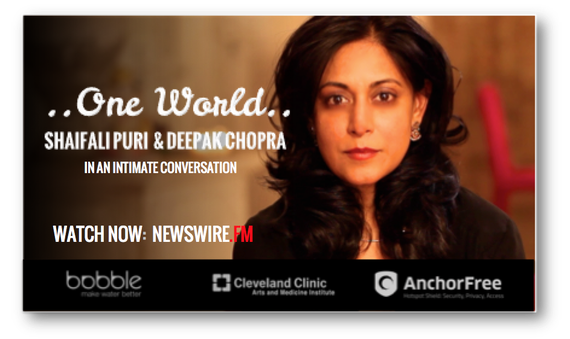 Today, with the Nike Foundation, Shaifali has been taking the knowledge she gained with Scientists without Boarders and using it to better the lives of young girls globally through what they call the Girl Effect. The Girl Effect is a movement based upon the idea that there are millions of young girls around the world living in poverty. These girls have huge amounts of untapped potential. "If we inspire and empower these girls, we can stop intergenerational poverty before it starts." The Nike Foundation, with Shaifali's help is recognizing that to support this mission of empowering adolescent girls, a variety of actors are needed.

Civil society, the private sector, and government all have a role to play and recognizing the potential of partnerships is key in developing a strong program. By empowering all of these partnerships, Shaifali is empowering a portion of the population that has long been overlooked on a global level. One empowered and motivated woman working to empower millions more through simple and effective structural changes.