When it comes to photography, you don't always need to think about the big picture.

Shutterbugs around the world trained their shutters on small subjects like, well, bugs, for the 37th annual Nikon Small World Photomicrography Competition.

Photomicrography -- the act of taking a photograph through a microscope -- produces stunning close-up images of tiny objects, giving viewers the chance to observe minuscule details that can't be seen with the naked eye.

This year, photographers submitted mind-blowing pictures of a blade of grass, a microchip and an ant's head, among other subjects. But Dr. Igor Siwanowicz of Madison, Wisconsin, took the top prize with his portrait of a green lacewing larva, magnified to 20 times its actual size. (Popular voting remains open until Oct. 30)

Siwanowicz, 35, who mainly photographs insects, says he is proud of his ability to show beauty in animals that are commonly considered ugly.

"Usual evolutionary restraints don't seem to apply within the realm of tiny animals, which is evident in the abundance and variety of often grotesque and utterly alien forms," he told The Huffington Post.

"Microscopy allows me to see beyond the cuticle, explore the baroque arrangement of muscle fibers or intricate fractal-like network of neurons, and appreciate that beauty -- probably in the most subjective sense possible -- isn't only skin deep."

SEE THE TOP PHOTOS IN THIS YEAR'S CONTEST (story continues below):

PHOTO GALLERY
It's The Small Things That Count: Photomicrography

Images taken through photomicrography often appear abstract, and Siwanowicz says he has been praised for his figurative depictions of insects.

"I often hear that the animals in my photographs seem to have grace, style, or even human character; I am apparently able to convey through photography my attitude towards living creatures and nature in general -- which is that of respect and admiration," he said.

Siwanowicz might approach his photographic subjects with respect and admiration -- but they don't necessarily return the favor.

In fact, Siwanowicz only decided to photograph the green lacewing larva after it began "gnawing" on his hand as he walked outside. He trapped the bug -- which is known for eating aphids, not people -- and placed it inside one of the test tubes he carries everywhere he goes in case he crosses paths with an insect that could make for an interesting photo.

"Traveling with a test tube (or bunch of them) falls under perfectly normal naturalist’s behavior," said Siwanowicz, who after studying protein crystallography found a career using his skills in confocal microscopy and invertebrate photography. "I have several reasons to carry all sorts of receptacles with me at all times: I take photos of insects, and sometimes don’t have a camera on my body."

Using a technique he perfected while photographing fruit flies, Siwanowicz preserved the insect in formaldehyde, encased it in a pea-sized block of agar, then placed it in a microtome -- a machine that slices the specimen into super-thin strips. He dyed the slices to help emphasize certain parts of the bug's anatomy, then created the final image, which was assembled as a photomosaic from six different pictures.

Thanks in part to the green lacewing larva's formidable mandible, the award-winning picture makes the tiny insect look a powerful predator.

"Every life form provides unlimited abundance of exquisite designs and solutions (all of them non-copyrighted and royalty-free!), all along the scale from the level of an organism down to the realm of molecules," said Siwanowicz. 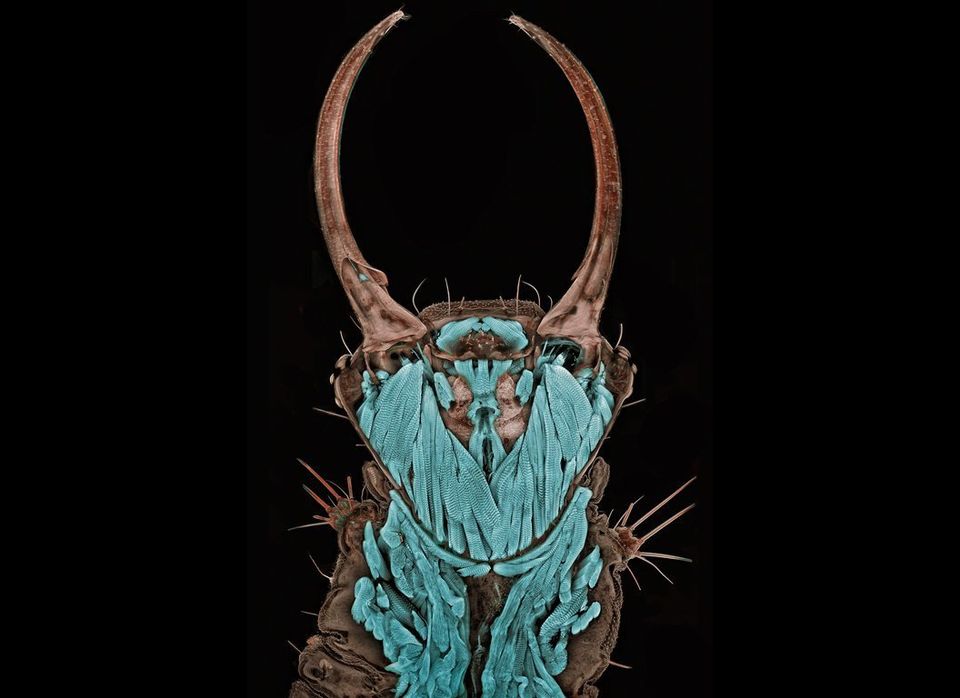