I met Nile Rodgers winter of 1991. I was newly divorced and freshly hooked up with a hot-ass boyfriend with a ponytail and a bass guitar.
After seven years of servitude to the husband whom I had adored and labored for, for sure, when I left him it wasn't my first choice, it was my only choice. I was bereft but resolved. I packed him off to Italy, ostensibly meeting him there; a lie. We wrestled through tearful long distance phone calls.
I had worked with the husband for years because for us to survive we needed him to create 'content' aka 'artwork' and for me to sell the fuckers. And we did.
Next came Ponytail and I fell directly in step with my previous behavior. The enabler.
Ponytail said he wanted to be a rock star, I said show me what you got. He busted out some tunes, and they were soulful. I liked them. No more and no less than the husband's paintings and I'd had no trouble moving those.
How hard could this music business be?
I produced a music video as a means of delivering Ponytail's music to my connections, which are considerable.
I badgered everyone until eventually I was introduced to Nile Rodgers. I had no idea who he was so I phoned him up and asked for advice.
We met. It was instantaneous, like old friends we greeted each other and fell into deep meandering philosophical conversation that bonded us.
He listened to Ponytail's music, critiqued it and said, 'I've got to get back to work, I'm in the middle of producing the B52s. Let's have dinner soon.'
And dinner we had. And that was the end of Ponytail. Nile and I remained friends. Which is why I'm on stage with him for the opening of his tour with Duran Duran in Miami, last Thursday April 1st, no joke!
See time 5:22 for the moment when Nile recognizes me on stage with him!
https://m.youtube.com/watch?v=Vy9VV9A3j_w
With me is musical impresario and trumpet player Emiliano Torres of www.Xperimento.com 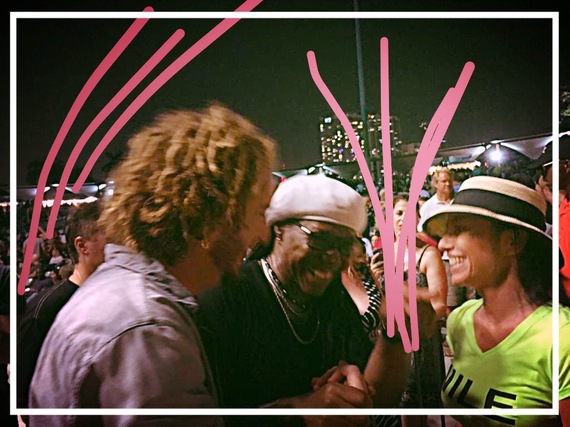