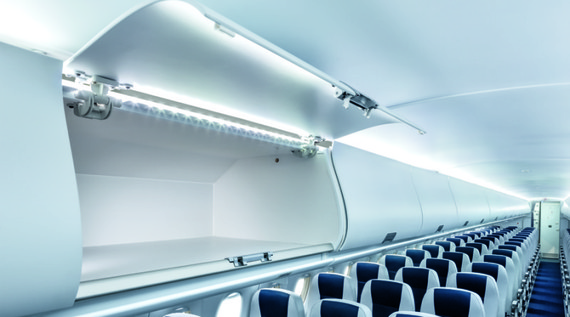 There's no such thing as fight or flight at 35,000 feet. Suspended in a holding pattern, or stuck on the tarmac, we lose all sense of our former selves ("We're airplane people now").

Nothing is more important to passengers than space. Particularly the coveted space of the overhead bin. I've already crammed as much as possible into my carry on and will not suffer the indignity of *gasp* checking luggage at the gate.

Here are nine foolproof tactics to ensure you get first pick of overhead bin space:

Along with augmented seat pitch and other amenities, one of the perks premium economy classes can offer is priority boarding. With this leg up against the competition, there is access to the full offering of overhead space at your disposal. Secure luggage with ease and a mild sense of superiority (hey... you earned it *wink*).

Head to the back.

In my experience the forward-most bins fill first on planes that board by seating group. If you didn't spring for premium economy, head past your seat to the rear of the plane for unspoiled overhead territory. Sure, you'll have to fight past a steady stream of grumpy oncoming passengers on your way back to your seat. But it's worth it since your bags will be properly stowed.

"No, no... you take it. It's fine! I can totally just put it under the seat in front of me. My legs aren't that long, and they don't cramp up nearly as much as they used to since the surgeries."

Puff out your chest, raise your arms over your head, and make loud noises (growl, shout, bang pots and pans together, etc). This will make other passengers think you're bigger than you actually are and assert your dominance about the cabin. You will have your pick of the bins.

Mystify the competition with your hips. These once captivated a nation. (Good luck.)

Talk about a particularly interesting leg of the wine and cheese tour you and your spouse took in Napa last spring. Read aloud your favorite passage from the second half of 'Jane Eyre.' Start early, at the gate, to anyone who will listen.

And grow a beard. No one can stand to see a bearded person cry. Consider that bin yours for the taking.

If you were #blessed with laser vision, vaporize your opponents' carry-ons while their backs are turned. If they ask, pretend like you didn't see them bring anything on. They'll assume they imagined the whole thing, leaving you will all the sweet, sweet overhead space your heart desires.

Many cultures worldwide have different forms of curses, hexes, and spells that can be used against overhead bin adversaries. Check ahead of time on the TSA website if materials needed for your ritual can be brought on board. Holy oils, eye of newt and graveyard dirt must be in quantities below three ounces and stored in sealable plastic bags.

Sam Wright Fairbanks is an editorial fellow at Map Happy. He has also written for the Reykjavík Grapevine.