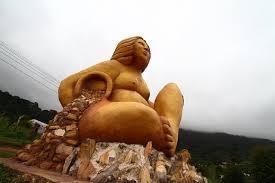 Are you a woman (or man) who has lost touch with yourself spiritually -- or has never gotten in touch with yourself spiritually -- or who just wants more joy in each day? If so, you may want to try entwining more goddess energy into your life. Many anthropologists believe that human societies were originally goddess-centered, and goddesses are still worshipped on every continent. Whatever your desire -- strength, wisdom, compassion, fertility, creativity, sexuality -- there is a goddess who can help you. Connecting with the goddesses who call to you -- in the form of jewelry or art, words and music, or simply your thoughts -- can sweeten and enhance your days with bright threads of unity, wonder, and female power.

But how to begin? The number and diversity of goddesses loved, worshipped, and celebrated throughout time and into the present, in every corner of the earth, is so breathtakingly large that trying to keep track of them can feel like counting the stars. To start you off, here are nine of my own favorite goddesses, chosen from among the most popular female divinities celebrated today (please note that many of them may also be known by different names or spellings).

Durga. The great Hindu mother goddess Durga is really nine goddesses in one. Durga's nine manifestations -- embodying qualities from courage to piety to blissful joy -- are celebrated in India during a huge nine-day festival called Navarati. Durga is often pictured as a fierce goddess with many arms riding a lion. I have revered her ever since I found an ancient and powerful stone carving of her in the Asian wing of the Museum of Fine Arts in Boston. You can call on Durga's invincible spirit when you need to be strong to your core!

Yemaya. A queenly and beautiful ocean goddess, Yemaya is mother of all waters in the Yoruba religion of Africa, which has spread to Cuba, Haiti, and elsewhere. Once a year, tens of thousands of people float flowers and other gifts for Yemaya out into the ocean from the shore of Salvador, Brazil. Bringing Yemaya into your life, perhaps with this chant, which brought her to me from a women's drumming group based in my area of Maine, can sweeten your life with compassion, fertility, nurturing, and healing.

Brigid is a powerful ancient Irish goddess, later associated with the 5th century Catholic Saint Brigit. She is the Goddess of healing, as well as poetry, song, and metalwork; Ireland is dotted with springs that are sacred to her. Since 1993 the Brigidine sisters have kept an eternal flame burning in St. Brigit's honor in Kildare, the same place it used to burn for the Goddess in ancient times. Every year during the first stirrings of spring on February 2, people gather there to celebrate St. Brigid's Day. To me as a poet, Brigid is a source of deep joyful creative inspiration -- a reassurance that life renews itself.

Kuan Yin, the Buddhist Goddess of compassion and mercy, is the most revered goddess in Asia. I first encountered Kuan Yin's image, in a characteristic pose with one hand raised in loving blessing, in the garden of an acupuncture center in San Francisco and have counted on her gentle presence in my life ever since. Just the thought of Kuan Yin can bathe us in the warmth of understanding, forgiveness, and gentle compassion. There are beautiful temples to her all over the world, including one on Spring St in New York. There are some gorgeous songs of peace and bliss on this recent CD of chants in her honor.

Sekhmet. An ancient Egyptian lioness goddess of war, healing, and menstruation, Sekhmet is actively worshipped today among neopagans in Europe and the USA. A temple to her has been built in Nevada. Sekhmet's breath was said to have formed the desert, and she embodies a raw fierceness, a kind of primeval force of survival, growth, and self-realization. At a rebirthing ceremony in which I participated last year, I found myself channeling Sekhmet's power and felt myself filled with a transformative courage I didn't know I had.

PachaMama. This powerful and widespread Earth Mother goddess of Latin America causes earthquakes and often takes the form of a dragon. On the day before Ash Wednesday, people bury food, throw candies, and burn incense to honor her. In the traditional Pachamama despatio ceremony, offerings of plants, candies, and symbolic items are wrapped up and burned in gratitude and supplication to Pachamama. To me, Pachamama is an intimate, physical goddess; I feel moved to whisper to her when I am outside with earth, plant, and insects, and I feel her voice sounding wordlessly inside my core.

Inanna. The Queen of Heaven and Earth in ancient Sumer, Inanna is best known for the gripping story of how she descended to the underworld. Inanna reminds us that we need to make ourselves vulnerable in order to be reborn. As a poet, I feel a special connection with Inanna, since poems in her honor by the priestess Enheduanna (2285-2250 BC) are the first known poems ever to have been signed by their author. When faced with a difficult transition, I think of Inanna and contemplate the story of her descent and rebirth, captured in Diane Wolkstein's powerful translation, Inanna: Queen of Heaven and Earth: Her Stories and Hymns From Sumer.

Changing Woman. When the Apache earth-goddess Changing Woman begins to age, she walks towards the rising sun until she meets her younger self walking towards her. Today, many Apache girls mark the beginning of womanhood by participating in the challenging four-day Sunrise Ceremony that Changing Woman is said to have taught to their people. Thinking about Changing Woman, and the graceful way that she both changes and stays the same, helps me learn how to navigate change more smoothly--whether the natural progress of time or life's occasional wild rides.

Gaia is the ancient Greek Earth Mother who birthed the world and humanity out of Chaos. Today, the name Gaia is known mainly through Dr. James Lovelock's influential Gaia theory, which proposes that the Earth and all its organisms are interconnected in a complex "living" system. I use the word Gaia when I want to think of the planet Earth itself as a generous, vulnerable, life-giving Goddess, the source of all the beauty and wonder and life for which we are so grateful -- and which so much needs and repays our care.