Get pumped: Ninja Day is upon us.

Rest assured that at HuffPost Weird News, every day is Ninja Day. But it's also self-evident that ninjas are so awesome that they need their own holiday.

In Japan, Feb. 22 is unofficially Ninja Day, according to Kotaku. Why Feb. 22? It's Japanese wordplay, and we'll get into the context later.

Alien problem? With ninjas, no problem!

Some ninjas are born women.

Just kidding. No one is born a ninja. Ninjas are forged in the twin, towering infernos of deadly combat and relentless training.

The good news is that anyone, even jerks, can grow up to be ninjas. All it takes is hard work, dedication, and a deadly level of awesomeness.

Even though Ninja Day isn't a national holiday -- yet -- Kotaku notes that the cities of Iga and Koka are promoting it as a celebration of their ninja heritage. Both cities are historic ninja strongholds, and to celebrate, local bureaucrats have worn ninja costumes to work.

It might seem odd for a flaming pillar of awesomeness to have to hold down a 9 to 5, but there's some historic precedent for it. Jinichi Kawakami, Japan's last ninja grandmaster, told the BBC in a 2012 interview that "you cannot make a living being a ninja," so many of them had day jobs. 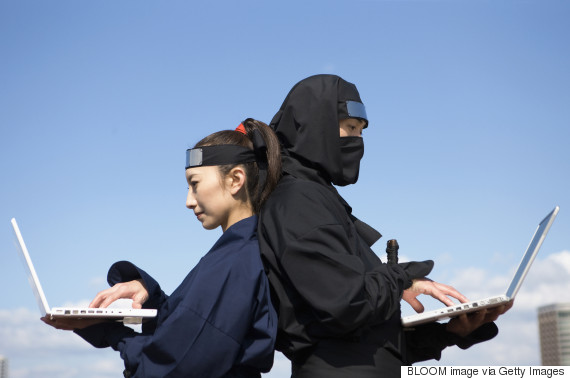 These are social media ninjas.

Generally, that's not a problem if you're working nights as an assassin that strikes from the shadows. According to the BBC:

Japan's ninjas were all about mystery. Hired by noble samurai warriors to spy, sabotage and kill, their dark outfits usually covered everything but their eyes, leaving them virtually invisible in shadow - until they struck.

It's a part-time job. There's opportunity for overtime, but not much in the way of career advancement. It's often deadly. Ninjas don't ninja for the money. Though it's no wonder they're a dying breed in Japan, the reality still hits you in the feels worse than this:

Seriously, dad? He slices an alien demon summoned by the lunar eclipse to ribbons, saves you, Irene and the whole freaking world and you just go and die on him? Is there sorrow at the heart of every true ninja?