This will be one shell of a marriage.

A man wearing a Raphael costume took a knee on Saturday and proposed to a woman dressed as Leonardo -- in front of an entire stadium of fans at a Fresno Grizzlies game. Yes, minor league baseball is awesome and weird. Awesome because its teams can get away with slapping on Teenage Mutant Ninja Turtle costumes for TNMT Night: 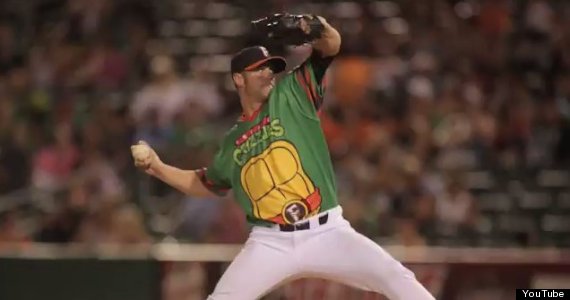 And weird because a real-life couple agreed to get married while donning full turtle garb:

Watch the video above to see the radical proposal for yourself, and then let's discuss the problems here. First, Raphael? Come on. Every self-respecting turtle fan knows that you always pop the question as Michelangelo. The nunchaku is far superior to the sai and... but we digress.

What we do know for sure is that we need to make our way over to California and check out a Fresno Grizzlies game. On Saturday, fans got free pizza and a show from the turtles themselves, and the team mascot even dressed up as Splinter, according to SBNation. Yes, it's an advertisement for Nickelodeon's TMNT series, but Ninja Turtles and baseball go hand in hand.