What worries anti-terrorism most about people like Omar Mateen is that the combination of hatred, nothing to lose and the reward of paradise if you kill and die for your extremist cause is a formula for terrorist acts that is nearly impossible to stop.

It may be true that once a person has turned the corner and reached a point of nothing to lose because of how much the chance for a successful and happy life has been lost and this is compounded by losing any feeling for the value of their or anyone else's life plus being rewarded if you kill and die for an extremist ideology, there is little to stop them.

To prevent such a "runaway train" careening towards a terrorist act, we need to focus instead on hate and the violence that is triggered by it and see how to intervene before they develop.

To do that it might be helpful to start with the act of violence and reverse engineer back from it to states of mind that may lead up to it.

I would certainly welcome any input or refinement of what follows because, we really are all in this together.

To put this in context, please refer to the following illustration taken from Talking to Crazy: How to Deal with the Irrational and Impossible People in Your Life (Amacom Books, $24.95) and bear with me. It will help explain how hatred can develop and indeed be "home grown" (contributed to from how you were raised). 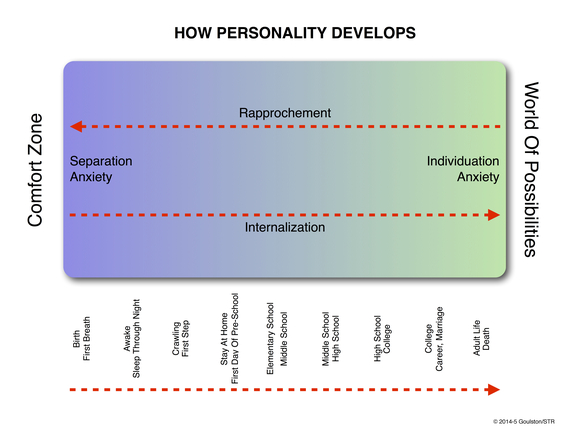 What this graphic describes is that all through life you are stepping into the unknown. From Birth to First Breath, Awake to Sleeping Through the Night, Crawling to First Step, etc. Every time you do that, you look back to your parents in an act called Rapprochement (the French word for looking back) to see how they respond.

When that step into the unknown goes well and you feel great about it and look back, you are looking for reinforcement, "Atta boy!," "See, we told you, you could do it!," etc. When you receive that, you internalize it and that helps further motivate you to continue forward. When instead you are ignored, see mom or dad missing our base hit because they are too busy talking on their cell phone in the stands, or told, "You can do better," or shamed with, "Let's see if you can keep it up," it turns a feeling of triumph into hurt and frustration and then anger and thinking, "Nothing I do is ever good enough."

As disappointing as the step into victory that is poorly received becomes, what's much worse is when that step into the unknown goes badly and you experience failure, humiliation and real or psychological injury and you look back.

When that occurs, the original injury (either physical or failure at school or striking out at bat, etc.) causes hurt. Hurt is very unstable and quickly turns into either fear (that you can be hurt and injured worse if it reoccurs) or anger1. We are calling it anger1 at this point because it is the anger from the "fight or flight" reptile reaction you are having to the injury and the hurt. Flight if you react with fear; fight if you react with anger. Either reaction is an attempt to protect yourself from imminent re-injury that could threaten to cause you to go from hurt to fragile.

In the ideal situation, when the "Injury --> Hurt --> Fear/Anger" occurs and you look back to your parents (or teachers or coaches or mentors or friends) you receive a combination of specific accurate warming comfort (SAWC) that makes the pain immediately more bearable and specific interventional strengthening encouragement (SISE) that helps you persevere and fight through it.

By specific accurate warming comfort, we mean a parent wrapping their arms around you when you instinctively run to them in hurt or fear and allowing you to feel their larger more comforting presence experiencing the hurt with you and absorbing it from you. Whatever piece of you has been momentarily shaken up by the injury is restored by that warming, comforting presence. It doesn't mean being overly effusive or over the top with a pitying, "Oh my poor baby" response.

By specific interventional strengthening encouragement, we mean stepping in after a quick assessment that the injury will not be worsened by further activity and coaching/directing you to go back into the "game" and do what will make the situation better and help you turn a jarring injury into tenacity and a mistake into mastery.

When however a child or even an infant is responded to not with either SAWC or SISE, that child's "Injury --> Hurt --> Fear/Anger" will turn into frustration. Frustration is the psychological state of being stuck and feeling that moving forward or away aren't immediate options. Instead you just remain stuck while your frustration mounts.

Over time that frustration can give way to a defeatist withdrawal and depression and in the worst case to suicide to just make the pain go away.

Alternatively, that frustration can give way to an increasing anger, that we are referring to as Anger2, that becomes sustained. Signs of Anger2 include a continued negativity and anger and condemnation in your comments about other people. Often it is directed at groups who appear to you to have it better and in your increasingly angry and paranoid mind, appear to be gloating at you and acting entitled to the happiness they have that you don't.

It is in the stage of Anger2 or sustained anger that "red flags" need to be noted and reported. The problem of course is that most people believe that doing that will cause the angry individual to now have a target for their anger and violence towards you.

Rather than reporting such individuals who you don't think will change and who you think law enforcement - which is already too overburdened and overcrowded by the criminal element -- will merely give a rap on the wrists. After law enforcement's inadequate response, you believe that that individual will be incensed at you and now come after you, stalk you and you have little faith that a "restraining order" will deter such a deranged person.

So what is the remedy for this?

What this means is that if people identify individuals that have reached the stage of Anger2 (sustained anger) and if those people have effective ways to either intervene or report such individuals to the proper authorities without those individuals coming back to harm them, those people (i.e. you and me), will find the way to do that.

Then of course after such individuals are identified and brought to the attention of the appropriate authorities, there needs to be in place ways to intervene with them to be able to defuse that sustained-anger-hurtling-towards-violence mindset and put them on a different path to deal with their hurt, injury, fear/anger before it begins to harden into frustration and moves down the road to sustained anger, hatred, rage and violence.

Postscript - it is because of the hurt, fear and anger in the world that I became an interventional psychiatrist with suicidal and potentially violent individuals, an FBI and police hostage negotiation trainer and to write extensively about intervening in my books.