UPDATE # 2: Nir Rosen talked to FishbowlDC's Betsy Rothstein on Wednesday afternoon. He apologized again for his tweets about Lara Logan, and said, "a man should never joke about women being abused or harassed." Rosen said that what began as "black humor" led to statements "I could not possibly mean...being taken seriously and I was hurting people I didn't even know without any intention." He also said that he has "quite radical" views on women's rights, and that he has spent years reporting on the suppression of women's rights. "By joking around with some friends I betrayed all that and betrayed my family, friends and supports, and I brought shame upon myself and them," he said.

UPDATE: Nir Rosen has resigned his fellowship at New York University, the university announced Wednesday. Rosen had been a fellow at NYU's Center For Law and Security, but CLS director Karen Greenberg said in a statement that he had stepped down after coming under fire for joking on Twitter about Lara Logan's assault. (See below for tweets.)

Nir Rosen is always provocative, but he crossed the line with his comments about Lara Logan. I am deeply distressed by what he wrote about Ms. Logan and strongly denounce his comments. They were cruel and insensitive and completely unacceptable. Mr. Rosen tells me that he misunderstood the severity of the attack on her in Cairo. He has apologized, withdrawn his remarks, and submitted his resignation as a fellow, which I have accepted. However, this in no way compensates for the harm his comments have inflicted. We are all horrified by what happened to Ms. Logan, and our thoughts are with her during this difficult time.

ORIGINAL POST: Journalist Nir Rosen apologized on Tuesday after a series of tweets in which he joked about Lara Logan's sexual assault.

Rosen is a veteran war correspondent who has garnered praise for his reporting from Iraq and the Middle East. But he ran into trouble when he tweeted, "Lara Logan had to outdo Anderson. Where was her buddy McCrystal." (Rosen deleted that and several other tweets about Logan.)

Rosen then said that he couldn't forgive Logan for defending Stanley McChrystal and condemning Rolling Stone writer Michael Hastings for his report on the former general.

In response to people criticizing him for his comment about Logan, he then tweeted, "Yes yes its wrong what happened to her. Of course. I don't support that. But, it would have been funny if it happened to Anderson too."

After that came a series of tweets in which Rosen defended himself and then apologized profusely for his earlier comments, saying they had brought "shame" on him and his family. 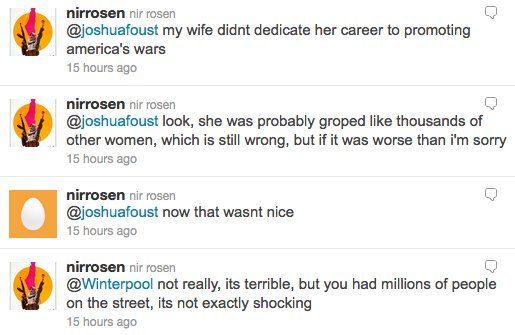 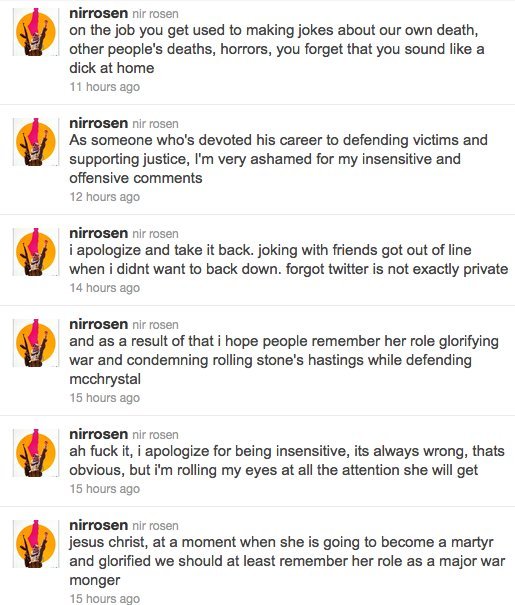 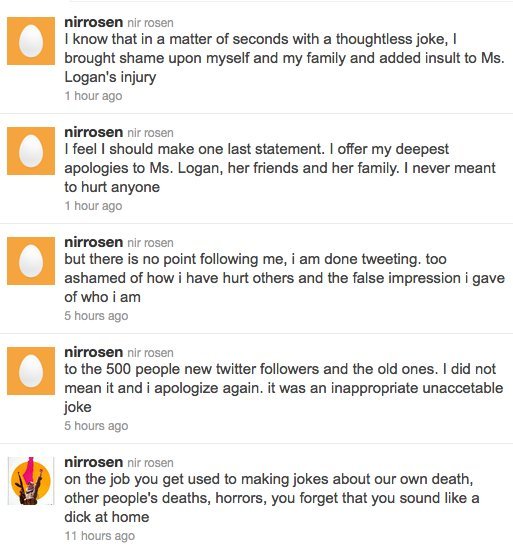