As a car, the all-electric Nissan Leaf has received mostly great reviews. But as a positioning statement, Nissan has, in many marketers' eyes, missed the boat. After some missteps, Nissan may now be on the right path. An ad I pulled from Fast Company recently hits all the right marks.

The debate -- or more accurately criticism -- began last year with a now infamous ad showing a polar bear lugging himself from the Arctic to some guy's suburban driveway to hug him for buying a Leaf. The ad was gorgeous, no doubt, and the YouTube version has been viewed 1.3 million times, which isn't bad. But some green marketing leaders, such as Jacquie Ottman, found it a bit heavy-handed and way too focused on the hyper-green benefits vs. driving experience.

But even before getting to ads, some have pointed out that the name itself is a problem. A "Leaf" doesn't exactly speak to the same part of the male brain that car ads usally target -- the caveman lobe that asks, "How will this car make me sexy and powerful?".

As one ad agency exec with a specialty in green marketing told me, "What guy is going to the pub and saying, 'Hey, I test drove a Leaf'?" As she pointed out, the print ads have focused on images like seals and kelp -- it's basically the worst of green marketing, "like it's packaged in burlap."

Instead, experts suggest that the Leaf should be positioned in a much more exciting way, as the first electric car for the masses and a true innovation. This, Nissan could trumpet, is a new era of mobility.

So skip to the latest print ad, in which Nissan does something new. A fascinating, colorful graphic shows different cars on a spectrum of fuel efficiency. The axis is not, however, miles per gallon, but "miles traveled for one dollar." As the ad says in small print: "comparing miles per gallon is suddenly irrelevant." 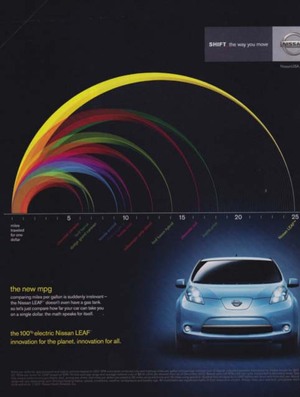 The traditional MPG metric has always been really odd: who thinks that way? And the government has had a devil of a time plugging (forgive me) electric cars into their normal rating system. What the heck does miles per gallon mean if you use no gallons?

But showing how far I can go for each dollar I spend? Now that's dead on. This is brilliant marketing, in tight economic times or at any time. Nissan has declared a new metric for a completely new model of transportation. Bravo.