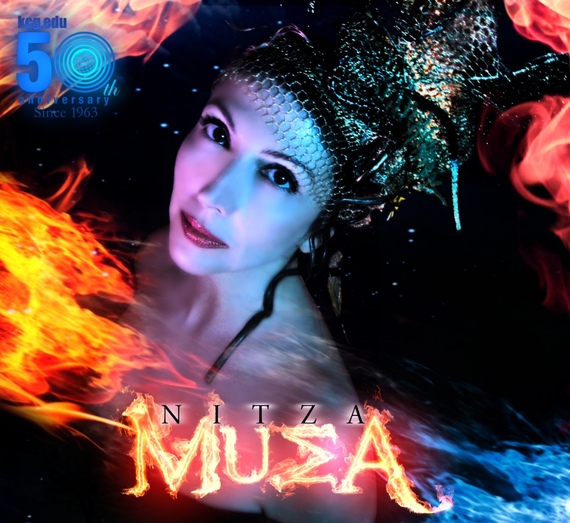 Nitza Melas was born in Montreal, Canada but her stage is the world, having performed all over. She has attained star status in Japan, produced and co-produced numerous CDs, been named "World Music Artist of the Year" at the Los Angeles Music Awards and has worked with the musician, magician and television performer, Criss Angel, on Cirque du Soleil's "Believe" which was instrumental in cementing her reputation and augmenting her trove of awards.

Nitza Melas, the woman with the celestial voice and ethereal presence onstage, recently released her latest CD, "Musa," a fusion of American pop, Greek folk, and Japanese music. Melas may perform in clubs around the world and teach vocals while residing for long stretches in Japan, but in heart and thought she remains purely Greek!

What made you decide to pursue a career in music?
Music permeated my household from a young age as both my parents were musically inclined. My Dad is an adept bouzouki player and singer who had his own band in Montreal, "Ta Paidia tou Pirea," and Mom was a wonderful singer and theater buff.

How did it all start?

Witnessing the connecting force that music had in my home between relatives and friends was the first gravitational pull. Whether for celebrations or nostalgia of the homeland, music seemed to express, communally and individually, the emotions of all.

How did you land the job with Cirque de Soleil?

The man behind Cirque, Guy Laliberte, walked in on one of my performances in Japan and asked if I would be interested in performing at some of his special events. Shortly afterwards, he offered me the opening act of his initial musical arena tour. It was the first time that an artist with the troupe would be billed under her own name and perform her own original compositions.

How many shows have you performed for Cirque de Soleil?

In the arena tour, "Delirium," I performed 167 times in North America and with Criss Angel's "Believe," in Las Vegas, I stopped counting after the 400th show. The special events department is the one I am mostly involved with these days. Creative teams plan unique performances all over the world, creating an intense, creative and generous environment to share our talents with each other and with the audience.

You are highly influenced by Greek music but also by Japanese sounds. How is it that you can marry classic, western and eastern cultures in your work?

Fortunately, for all of us, music has no borders. Part of being a generous artist is sharing what you know well and allowing for others to reciprocate. When dogmatic attitudes are abandoned, the ebb and flow occurs naturally. It is bereft of science and relies more on intuition, respect and generosity of spirit.

Your latest cd is called "Musa" and is a mix of influences from the three worlds you cherish, North America, Greece and Japan. Which one do you adore the most?

As I love each culture for what it offers me, I have no favorite. There is no utopia for an artist who grew up in a microcosm (Greek) inside another microcosm (French Canada). I am very comfortable being different and yet, by some osmosis, finding myself feeling comfortable in my own skin in foreign lands. Some immigrant children feel a lack of belonging their entire lives but I tend to feel that I am a citizen of the world and that the fabric of my makeup is interwoven with ideas, tastes and attitudes from various influences. I adopt what attributes I admire and reject whatever doesn't suit me.

How are you planning to stage this latest work of music which needs to be visualized?

Twice a year, I teach at KCG University in Japan. There are some incredibly talented students at KCG who are generously lending their time to create visuals for this project. The excitement of not knowing the end result is part of the adventure and creative process.

What are your feelings about Greece?

Greece is what swims softly in the cells of my body, resonating and reacting viscerally inside me once I step off the plane. I sit by the sea as I write, listening to the waves, under a starlit sky in the silence of a small village in Mani, and feel inner peace.

How did you develop your deep relationship with Japan?

Japan is a land that has welcomed me and respected me and, then, adopted me. It continues to allow me to dream unabashedly and I feel possibility and generosity everywhere. Japan is my lucky charm!

Are you planning to work with Cirque de Soleil again as a solo performer?

With Guy Laliberte anything is possible!

Do you have any plans for a concert in Greece?

I am quite positive that performing in Greece is in the cards for me. The right opportunity must simply present itself.

Who is Nitza Melas today?

She is still the little girl who wants to make music and travel the world.