It was undoubtedly one of the most unorthodox - and therefore memorable - settings for a major political debate. On July 24th, 1959, the United States opened the American National Exhibition at Sokolniki Park in Moscow. The Soviets and Americans had agreed to hold exhibits in each other's countries as a cultural exchange to promote understanding. The Soviet exhibit in New York opened in June, and the following month Vice President Richard Nixon went to Moscow to open the U.S. exhibit, and take Soviet Premier Nikita Khrushchev on a tour of the exhibit.

During the tour, Nixon and Khrushchev had a series of exchanges through interpreters debating the relative merits of capitalism and communism, which are now known as the Kitchen Debate. The Kitchen Debate took place in a number of locations at the exhibition but primarily in the kitchen of a suburban model house, cut in half for easy viewing.

Khrushchev surprised Nixon when he launched into a protest over a recent resolution that had passed the U.S. Congress condemning the Soviet Union for its "control" over the "captive peoples" of Eastern Europe. He then dismissed the new technology of the U.S. and declared that the Soviets would have all of the same things in a few years time. Nixon responded by saying at least the competition was technological, rather than military. Both men agreed that the United States and the Soviet Union should seek areas of agreement.

SHERMAN: I covered the famous kitchen debate between Khrushchev and Nixon. It isn't generally remembered that that kitchen debate went on in two stages. The world only remembers the second stage when Nixon put it to Khrushchev. But, in fact, what happened was that this was the Eisenhower Administration's effort to have some basis of working with Khrushchev. Nixon started out that visit, that was to the American pavilion at the trade fair there, being very diplomatic.

The first thing they visited, I seem to recall, was a television studio that they had set up. Nixon said that this was our latest technology in very friendly and gentlemanly terms, but Khrushchev didn't let him get the words out of his mouth saying that they had far superior equipment here and had had so for years. Khrushchev had the "Who invented ice cream?" kind of approach and was insistent that everything new had been invented by the Russians.

Anyway, lined around the studio where this exchange was taking place was the world press and you could see Nixon getting more and more uncomfortable because Khrushchev was taking the initiative and getting the best of him. Nixon could see the headlines that would grow out of this. They moved down to the kitchen where Nixon took the offensive and that is the part the world remembers.

Well, [the debate] started with the equipment, but covered the whole world. I mean, all the differences between the United States and the Soviet Union. In that sense it was far more newsworthy because it dealt with issues which brought out the real differences.

ROBINSON: [Harold "Chad" McClellan, Assistant Secretary of Commerce, Director General of the Exhibition] said to me, "How are we going to do this?"

I said, "I was in the Army and in the Army you're taught that the squad leader puts up his arm and everybody follows. I'll put up my arm. We'll decide now where we're going to go. You'll follow me and Khrushchev and Nixon know to follow you because you're the head of the exhibition."

We decided we'd take them into the first color studio in the world, which was provided there by NBC. After that, we would go past the Pepsi Cola stand, girls with colorful dresses and things like that. Then we went to the model house.

In model houses, you can only have a single line go through them, so we cut it in half and put the halves 20 feet apart so people could go and see the living room, the kitchen, and all. So, as we went into the studio, there was Madam Fursteva, one of the women members of the Cabinet, President of the Soviet Union, [Chairman of the Presidium Kliment] Vorashelov and [First Deputy Chairman of the Council of Ministers Anastas] Mikoyan and then of course Khrushchev and Nixon. They all stood in the color studio.

Khrushchev was very impressed and began talking about his achievement in building these 16-story apartment buildings. He revolutionized their housing so people could get away from their in-laws and 10 people living in a small apartment. So, then Nixon talked to him about our individual homes. So, things sort of escalated into a little debate.

Nixon was not known to be very ambidextrous with mechanical things. We had shown him the new Ampex recordable audio tape for the first time. He said, "Mr. Premier, please come over here with me." So, the whole group went over. He pressed the rewind button on the Ampex tape, pressed the stop button, pressed the play, as we had shown him, and suddenly the whole debate could be heard.

Khrushchev looked up and his mouth dropped open, as everybody's did. The Americans, too, hadn't seen it before. It was very interesting. We went from there past the Pepsi Cola exhibit.

A little sidebar: The night before, the Vice President of Pepsi Cola, Don Kendall, said, "I've got to get Khrushchev to drink Pepsi Cola." Don said, "How am I going to do that?"

We talked a while and I said, "Well, you asked me to lead. We'll go by and I'll just go a little closer to the Pepsi exhibit. The Soviets are very egalitarian, and they'll probably call out and offer drinks." There were six or eight of these Russian guides helping us and they were very pretty. That's exactly what happened. We got him to drink the Pepsi Cola.

Kendall came back in December after the exhibition was closed, negotiated a 15-year contract exclusive. Coke wasn't even allowed in there for 15 years. It's very interesting for me when I go back now to see Coke more predominant than Pepsi....In Russia, like most bureaucracies, you follow the lead of the leader. "If Premier Khrushchev was going to drink Pepsi, we will drink Pepsi."

We then moved to the kitchen of the model house. Khrushchev and Nixon stopped in front of the kitchen display. Now, they started up the debate again. Everybody thinks the debate was started in the kitchen. It actually started in the studio. It got hot and heavy, but it was civil. Nixon was pointing out these things and then Khrushchev would tell what his country had done. Journalists and everybody were squished in there. William Safire, the famous New York Times columnist, was with the public relations firm and his assignment was the model house. So, he was in the kitchen looking out and the AP guy couldn't do anything, so he threw Safire the camera. Safire took the picture.

One of the pictures was Nixon pointing to Khrushchev's chest. That picture was used in Nixon's campaign, and a lot of people attribute that picture to helping him to win. The reason is that in those days, from Truman through Kennedy through to almost Clinton, a predominant factor that students of political science will tell you about is that the American people basically voted for the leader who they thought could deal best with the Soviet Union. They feared that the Soviets had huge atomic weapons and were afraid of a first strike. 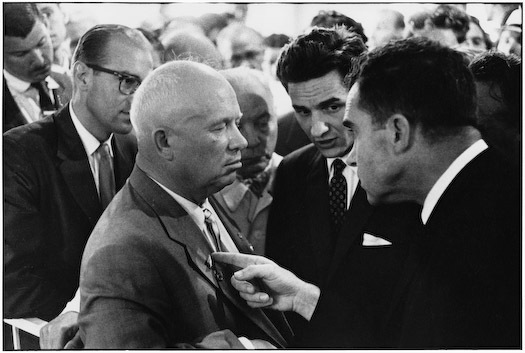 The photo showed Nixon being tough, and the photo captured a moment that influenced political history and had impact far beyond the immediate occasion.

CALLAWAY: [The debate] took place in one of our exhibits in which Khrushchev basically said, "This is a bunch of propaganda. You don't really have kitchens like this in the United States." Nixon said, "Yes, this is representative of what we have." It sort of went on from there about perceptions and misperceptions of the two countries.