By: Steve Silver, Esq., Partner at TheLegalBlitz.com
This is only a portion of the article. To read the complete article, please CLICK HERE. 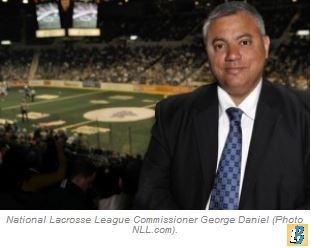 Twenty-eight years ago in 1986, the National Lacrosse League launched and George Daniel was grinding out his first year at Temple Law School. At no point did this young law student ever imagine he would one day find himself at the helm of one of the most popular professional indoor sports in the world.

Yet after a brief stint as a practicing lawyer in Easton, Pennsylvania, Daniel wound up taking a career detour into sports when he founded the Scranton Miners of the Atlantic Basketball Association in 1993. Daniel also founded the Black Hills Posse of the International Basketball Association in 1995. Through his basketball connections, Daniel was eventually recruited to join the NLL as general counsel and deputy commissioner. Daniel then became interim commissioner in 2009. Now in his sixth season as the head honcho of the NLL, Daniel recently helped negotiate a new seven-year collective bargaining agreement with the players' association that he hopes will help the league expand into more markets.

With the first week of the season just wrapping up, Commissioner Daniel took a few moments to talk about CBAs, concussions, the daily minutia of running a sports league and his long, strange career path.

What would be a typical day in the shoes of the NLL Commissioner?

I deal with a variety of issues on a day to day to basis. Certainly one part is dealing with player and labor relations. We had a collective bargaining negotiation that we just concluded and that is one thing I've learned on the job that I probably didn't have a lot of legal experience in coming in, which is labor negotiations. I've now been involved in six different collective bargaining agreement negotiations in thirteen years, which is a lot. But we now have a seven-year deal and I think that is one piece of what we do. Now that the deal is done, we have a luxury tax too. So a good chunk of my time is also dealing with player contracts and managing and administrating the new luxury tax system. Another part of my day involves league development and business development, whether that involves cultivating new sponsorship opportunities, new media opportunities and future growth of the league. Then another chunk of the day goes to corporate governance and administering the league bylaws. We have a board like the NFL and the NHL. The NLL is a not-for-profit trade association so we are governed by a board of governors. Each team has one vote so I report to the board. But I also enforce the rules of the league, the bylaws and the constitution for the benefit of all the members. We administer trade, player suspensions, fines, appeals and other administrative issues. So our days are quite busy.

I imagine lacrosse is not immune to head injuries, so what is the NLL doing in terms of concussion awareness and protocol?

Like all leagues we are trying to adhere to best practices and continue to try to learn about concussions and put player safety first. Every year we toughen our rules to limit head shots and clamp down on player discipline to act as a deterrent. We try to use best care from a medical standpoint and make sure we are following all the proper protocols. Lacrosse is a little different from other sports in that players generally participate in other organized lacrosse games in the offseason which makes it harder from a league perspective. They play in summer leagues or the outdoor league so they are playing other games and concussions can lead to a cumulative effect. So for us it is very challenging and we have to be cognizant of players suffering head injuries in other leagues or games.

From a workers' compensation or litigation standpoint, how do you deal with players who suffer injuries outside of the NLL that might be exacerbated by an injury during NLL play?

It is an evolving issue and one we have to continue to try to monitor. Certainly with the outdoor league they also have a responsible program and we have discussed with them the ability to share information as long as a player consents so we can understand what treatments have been done. Again, lacrosse is a not a full-time, year-round sport so players playing outside the two professional leagues is an issue. In a perfect world we would have the players in a much more controlled and monitored situation. However in the CBA, the players association wants the players to have the freedom to play in other events and we understand that it is not a full-time business. So at this point it is what it is.

This is only a portion of the article. To continue reading the complete article, please CLICK HERE.