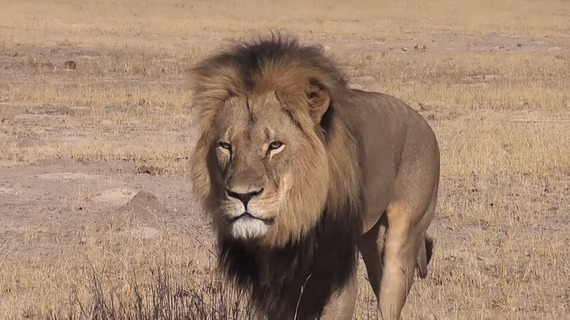 In the wake of the loss of Cecil the Lion, leading conservationists open up about big game hunting--and the bunk "population control" justifications for it.

Anyone who has not yet heard about the tragic killing of Cecil the lion--the subject of an Oxford University research study and beloved Hwange National Park resident--might as well be living under a rock. The outrage surrounding the incident has been relentless: on the last three days on Twitter alone, 1.5 million pronouncements have been made about the black-maned lion and Walter Palmer, the hunter/dentist who hunted him down earlier this month. And that's saying nothing of the tens of thousands of petition-signers, Yelp activists, and news outlets chasing the story.

Cecil did not die in vain. Millions of readers and wildlife-lovers have had their sympathies roused by Cecil's death, and the conversation surrounding conservation has never been louder. This, itself, is the greatest gift that Cecil could have given to his brethren. But awareness alone isn't enough, especially when the sentimentally charged conversation happens in a void. So we talked to some of Africa's most trusted, most esteemed conservators about the practice of game hunting to set the record straight--the good, the bad, and the (often incredibly) ugly.

Dereck Joubert of the National Geographic Big Cats Initiative, whose 2011 film The Last Lions is just one of many accomplishments over decades of conservation work, put it plainly: "The science is clear, lion populations decline where there is hunting." He says very little revenue from hunts ends up supporting wildlife initiatives, and outside sources agree, estimating that only 3-5 percent of hunting fees are returned to conservation groups. By extension of this logic, only $1,500 to $2,500 of Palmer's $50,000 fee will go back to conservation efforts.

More from T+L: Now You Can Go Inside a Glacier

Still, we've heard first-hand accounts from individual safari guides and respected safari companies that hunting can be done in a responsible way. Why the conflicting information, even among the industry's elite? Corruption and enforcement varies from country to country. But the outlook as a whole is dire--proven by incidents like Cecil's that show that even legally procured licenses can (and far too often do) result in illegal baiting and unlawful kills. And as a traveler with few trusted authorities to turn to, there's simply no way to know which operations are truly legal and which are operating as poachers in disguise.

"Quite simply, big game hunting is driven by money as is lion, elephant or rhino poaching," says Ashish Sanghrajka, President of Big Five Tours & Expeditions, explaining that "agricultural" hunting, or hunting for population control, is a thinly veiled excuse for big business.

Says Joubert, "'Conservation' by hunting is an archaic and selfish concept that hides behind conservation to justify its existence. The largest decline in lions has happened through an era when hunting was the dominant 'management' form."

More from T+L: How to Avoid Hotel Scams When Booking Online

As for reports that famous conservation activists, like Charles Darwin, once hunted game--rest assured that population numbers had not yet hit their steep decline in the 1800's or even the early 1900's, when Teddy Roosevelt was said to hunt for game. According to Joubert, population levels for lions in Africa have shrunk by 95% in the last 60 years, meaning that any decline would have registered far more recently.

Killing one lion might as well mean killing 23 lions. Why? A single license generally allows for the kill of a mature male, and the elimination of a dominant male from a pride severely shifts the dynamics within the herd. "Males often work and live in groups of 2 or 3," explains Joubert, saying that "When one is killed, the remaining males are left vulnerable to attack, and are most often ousted by marauding males. Males coming in have one desire: to start their own families, and not bring up the ousted male's cubs. So they immediately kill any cubs. On average a pride may have between 10 and 20 cubs (if the average pride is 8 females.) One license kills one male and his partner, as well as about 20 cubs, and often a mother who dies while trying to defend her cubs. The total tally for one license? 23 lions!"

More from T+L: T+L Checks In: Why We're Staying at 1 Hotel South Beach

Let's keep doing the math here. One license might generate $2,500 for conservation, if you're lucky. Which means the price of a lion's life is barely more than $100 when accounting for 23 lost lives.

Tourism. Responsible tourism. With an operator or at a lodge that has proven standards for conservation, integrates the local community, and fosters relationships between travelers, locals, and wildlife. (Find a list of responsible outfitters here.)

The numbers make an obvious statement. Says Joubert: "Hunting concessions bring in around 10 hunters at best, a year but with a massive impact on wildlife. Selinda Camp [Joubert's luxury lodge in a former hunting area in Botswana] for example brings in 8,000 travelers on national airlines, many of whom adopt school projects or invest in saving a rhino for Rhinos without Borders, among other things."

More from T+L: Creative Spa Treatments That Get You Outside

And the advantage from an economic standpoint is just as clear. "Hunting in the big hunting countries contributes less than 0.27% to the respective national GDP's," says Joubert. "In Botswana, eco-tourism is the largest employer in the northern districts and hires 40% of the working population."

According to a report by the World Travel & Tourism Council, the total contribution of travel and tourism to Botswana's GDP was 8.4% in 2013, and was forecasted to rise further to 8.6% for 2014. That's an impact 31 times that of hunting. And unlike hunting, many lodges convert a substantial fraction of their profits into community empowerment and conservation issues. (Because yes, human conservation and the conservation of cultures belong in the same breath as animal conservation, as many have been keen to point out this week.) Leading safari company andBeyond, for instance, spends $9M annually on conservation of biodiversity and community empowerment, while Wilderness Safaris funds a whopping 93 research programs that range eight countries and dozens of species from black rhino to roan antelope (and yes, lions).

It goes without saying that Joubert's Great Plains Conservation and Big Five Tours, mentioned throughout, are also excellent and reliable choices that do a plethora of good work.

Can't make it to Africa for a safari? Contact any of these companies or the World Wildlife Foundation about making a donation. (The travel companies largely operate NGO's of their own or can point you towards organizations with boots on the ground.)