If you've ever come home from a long, terrible day at work and thought, "I want to make dinner, but I just don't have the strength within me to boil pasta," we have good news for you. Barilla just came out with a new line of pasta, called Pronto, that doesn't require you to pre-boil water.

According to Barilla, Pronto will help "make mealtime more convenient for the busy home cook." The company's promotional video for the pasta shows that it only requires a few easy steps to prepare:

1) Pour pasta into a large pot.
2) Pour three cups of cold water into that same pot.
3) Turn your burner to high and set a timer for 10 minutes.
4) Stir occasionally, until all of the water is absorbed into the pasta.
5) Add sauce and keeping cooking until it's hot and ready to eat.

BONUS: no draining required either!

Here's our reservation: Though the concept of the one-pot pasta dish became a hit this past winter, its main issue is sogginess. It's nearly impossible to cook pasta to a perfect al dente texture when it's absorbing all the water in the pot. But for un-picky kids and those who like their pasta on the soggy side, this could still be an okay option. 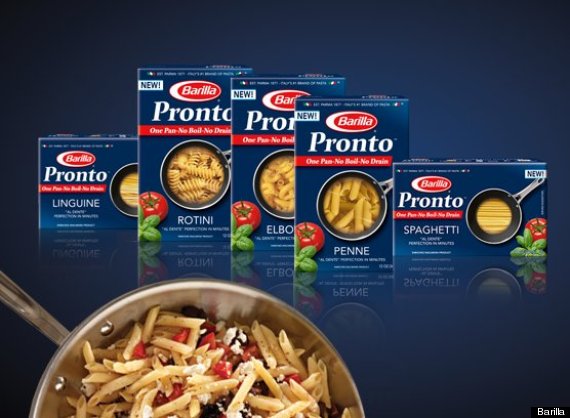 Step One: Chop Your Veggies
Lynn Andriani
The beauty of this recipe from Laurie David's The Family Cooks: 100+ Recipes to Get Your Family Craving Food That's Simple, Tasty, and Incredibly Good for You is that you boil your penne, ziti or bow ties together with the sauce ingredients. To get started, prepare your ingredients: Chop garlic, onion, kale and basil; open a can of diced tomatoes; and, measure out 4 cups of water. The hard part, as it were, is now done.
Step Two: Cook Everything In One (Just One!) Pot
Lynn Andriani
Heat your biggest pot (an 8-quart stockpot works well) over high heat and drizzle some olive oil in. Just as it starts to simmer, add everything you've just chopped (plus the tomatoes), giving the vegetables some time to soften in the oil and develop more flavor. Then add 1 pound of whole grain pasta and water. Once the liquid comes to a boil, reduce the heat to a simmer, so you see bubbles gently rising to the surface. Continue to cook for as long as the pasta package suggests, stirring every few minutes. Call everyone to the table because you're about a minute away now.
Step Three: Mix It All Together, No Serving Dish Required
Lynn Andriani
When the pasta is al dente (tender but not mushy), turn off the heat. The water will have all been absorbed, so there's no need to drain it. Fold in grated Parmesan; because while people may want to add cheese to their own portions, a quarter-cup, or so, stirred into the entire dish gives it a touch of creaminess, and probably eliminates the need for you to add salt. Finally, top the pasta with a few sprigs of fresh basil and enjoy.

Get the full recipe: One-Pot Pasta