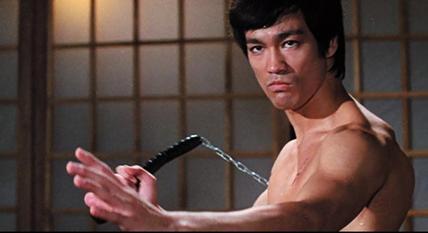 As a teenager I was a Bruce Lee fan, and my favorite movie by him was Fist of Fury (originally released as The Chinese Connection in America), which was released in 1972. After recently revisiting the film, one of the things that stood out to me was that Fist of Fury was the most politically and historically charged of Bruce Lee's films. For this reason I think Fist of Fury is also a very important film for understanding the role that movies can have in helping a people or nation collectively face and overcome historical traumas.

The film is set during the Japanese occupation of Shanghai. Although China at the time that Fist of Fury was released was decades removed from the Japanese invasion and occupation depicted in the film, the film's massive popularity was a testament to the chord that the nationalist message of Fist of Fury struck with Chinese audiences. Audiences are reported to have stood up and cheered some of the scenes in the movie. The Japanese invasion of China was the final blow in a series of defeats for the Chinese people. The first blow came at the hands of the British during the First Opium War. This defeat began what some refer to as the "century of humiliation" in China, in which China's power and prestige faded as Westerner powers and Japan would assert their dominance over the Chinese population. China would suffer another defeat in 1860 at the hands of the British and French in the Second Opium War.

The most traumatic period of this century of humiliation were the defeats at the hands of Japan. The First Sino-Japanese War began in 1894. This conflict began over the control of Korea, which was at the time under China's sphere of influence in Asia. Going into the war China had a much larger army, but Japan, which had become more technologically advanced, had better equipment and weaponry. By 1985, the war was over and the terms of peace were humiliating for China. Aside from losing Korea, which would go on to become the independent Korean Empire, China also ceded the island of Taiwan to Japan. Japan also established control of Manchuria. Although Korea established itself as an independent nation, Korea would also fall under Japanese rule in 1910.

The Second Sino-Japanese War was much bloodier and destructive than the first. It is estimated that as much as 20 million Chinese citizens were killed as a result of this war. One of the worst incidents of the conflict was the Nanking Massacre (also known as the Rape of Nanking). The Japanese troops massacred as many as 300,000 Chinese civilians. Aside from the murders, hundreds of thousands of women were raped. Soldiers went from house to house raping women. After being raped, the women were often executed in a number of horrific ways, including having their vaginas being penetrated with bayonets, bamboo poles, and other objects. Others were captured and held as sex slaves. Chinese women were referred to as "public toilets" by the Japanese.

Dr. Robert O. Wilson gave the following description of some of the violence that he witnessed in Nanking at the time:

The slaughter of civilians is appalling. I could go on for pages telling of cases of rape and brutality almost beyond belief. Two bayoneted corpses are the only survivors of seven street cleaners who were sitting in their headquarters when Japanese soldiers came in without warning or reason and killed five of their number and wounded the two that found their way to the hospital.

Let me recount some instances occurring in the last two days. Last night the house of one of the Chinese staff members of the university was broken into and two of the women, his relatives, were raped. Two girls, about 16, were raped to death in one of the refugee camps.

Bodies piled up in the streets where they were left to rot, as the Japanese destroyed everything that was in their path. Civilians were beheaded, shot, buried alive, hanged, or used for bayonet practice. Killing Chinese become like a game for some of the Japanese soldiers. For fun, the Japanese would light entire groups of Chinese on fire and sometimes toss grenades into those groups. Two Japanese army officers (named Mukai and Noda) had a contest between themselves to see which of the two could first kill 100 people with a sword. Both men surpassed their target of 100.

In Fist of Fury, Bruce Lee plays the role of Chen Zhen. The character of Chen Zhen has become somewhat of a folkloric hero in his own right, appearing in various films and television series since his first appearance in Fist of Fury. Chen's enduring quality as a fictional character is his representation of China's struggle against foreign oppression and racism. For this reason in the remakes and adaptations that followed Fist of Fury elements of the story are changed, but the core story of Chen's resistance against Japanese and other foreigners remain. Some of the more interesting alternations include Chen falling in love with a Japanese woman or having Chen as a World War I veteran. As popular as Bruce Lee's films were in China, none of the characters that he played has been as enduring and culturally relevant to China as Chen Zhen.

The movie begins with Chen Zhen discovering that his master, Huo Yuanjia (based on the historic martial artist by the same name), has suddenly died. Chen immediately has suspicions over the official reports that his master died of pneumonia. He would later get confirmations that his suspicions were true when he overhears two Japanese speaking about how they had poisoned Huo -- it is believed by some that the historical Huo was poisoned by the Japanese.

As friends and associates of Huo pay their respects to him, the ceremony is interrupted by some Japanese that enter the school carrying a banner that reads "Sick Man of Asia." Wu, who is a Japanese translator, insults the students of Jingwu and challenges them to a fight. Out of respect for Huo, none of his students fight back. This prompts Wu to mock them for being cowards. Later, Chen locates the Japanese at their school to return the banner that Wu sent. In the process, Chen singlehandedly defeats all of the Japanese students in the school and then forces them to literally eat their words by tearing off pieces of the banner and shoving those pieces into the mouths of some of the Japanese. He then defiantly declares that the Chinese are not the sick men of Asia before leaving.

In this scene Chen reclaims the pride of Chinese people in two ways. The first was in Chen's physical defeating of Japanese fighters. Chen becomes a symbolic representation of Chinese anger and frustration, as he overcomes the Japanese fighters, proving that the Chinese are not an inferior people. Secondly and perhaps most importantly, is that Chen overpowers the Japanese and then makes them eat their own poster. Whereas in the past the Chinese had been powerless in the face of Japanese aggression and had to endure such insults, Chen is able to reverse the situation on the Japanese by overpowering them.

An even more symbolic moment of this reclaiming a sense of Chinese pride is a scene in which Chen attempts to enter Huangpu Park, which takes place shortly after his first confrontation with the Japanese fighters. Chen is denied entry because he is a Chinese. The guard at the park then points Chen to a sign which reads, "No Dogs and Chinese allowed." Despite the ban on dogs, foreigners with dogs are allowed in the park. Some Japanese arrive and mock Chen by telling him they he could get in if he pretended to be a dog. Chen subsequently beats all of the Japanese that were mocking him and then he sets his sights on the sign. He shatters it into pieces with two jump-kicks.

The sign itself does not appear to have actually existed, although the oppression, discrimination, and humiliation that the sign represents were most certainly real. Chinese in the International Settlement were banned from parks that were under the administration of the foreign dominated Shanghai Municipal Council. Laws like this demonstrate the extent to which Chinese had become second-class citizens in their own nation. The law also banned dogs from Huangpu Park as well, although there were no signs displayed that explicitly banned both dogs and Chinese.

Fist of Fury stands out as being the most political of Bruce Lee's films, as well as a great example of how movies can play a critical psychological role. Fist of Fury helped to exorcise some of the negative feelings that Chinese still had towards the "century of humiliation." This is why audiences stood in applause as they witnessed Chen tear through Japanese fighters in his quest to avenge the murder of one of China's beloved heroes and to avenge all of the insults leveled against the Chinese people by their Japanese oppressors. Fist of Fury presented a way of confronting a troubled past by using an empowering narrative.

--
Dwayne is the author of several books on the history and experiences of African people, both on the continent and in the diaspora. His books are available through Amazon. You can also follow Dwayne on Facebook.