Barreling headlong into the 20th Century, the Royal and Ancient Golf Club in St. Andrews, Scotland, votes September 18 on whether to admit women. It's the same day Scots go to the polls to vote on whether to secede from Britain.

Secession, a matter of the country's constitution, requires a simple majority to pass. Admitting women to the enclave of 2,500 men who proudly stick their R&A Club neckties in the faces of females who can't walk through the door, will take a 2/3 vote.

We've seen this movie before. It took 10 years of activism and nearly $80 million in legal settlements with women working for companies whose CEOs were members of the club to break the Green Dinosaurs at Augusta National. Women knew all along it wasn't about golf. The club membership list was a roster of the top titans of the Fortune 500. Business was done, deals were made, and corporate entertaining was lavish. Females were barred from the festivities except to "entertain clients" offsite, limiting their chances for advancement and sending a powerful message about their true place in the business hierarchy.

The Royal & Ancient is no different. The members are from the international business elite. Clients are wined and dined every day on the links and in the plush dining room. NO GIRLS ALLOWED -- even if they're CEOs.

Louise Richardson, first female principal (president) of the University of St. Andrews, the prestigious 15th-century campus down the road, has to ask male friends to entertain major donors who want to lunch at the club. And she has to find someone to host a separate lunch somewhere else for their wives. The Royal & Ancient is copycatting Augusta National. They famously snubbed Virginia Rometty when she became CEO of IBM, even though the male CEOs before her had been asked to put on the green jacket. Following suit, the R&A Club ignores Richardson, head of one of the country's most powerful institutions. Her two immediate predecessors -- male of course -- got honorary memberships.

You can bet if the issue was race, the club would have relented long ago, as Augusta National did in 1990. But sexism runs deeper and is taken less seriously. According to the New York Times, when Peter Dawson, head of the R&A (ruling body of golf now separate from the Royal & Ancient Club) was asked in 2013 why racism is unacceptable but sexism is not, he replied that excluding women was "a way of life that [some people] rather like." Hmmm. Bet they said that in the antebellum south too.

At least the club has taken down the sign that said "No dogs or women allowed." We'll see after the vote if that was just out of respect for the dogs. 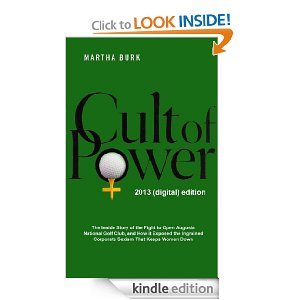