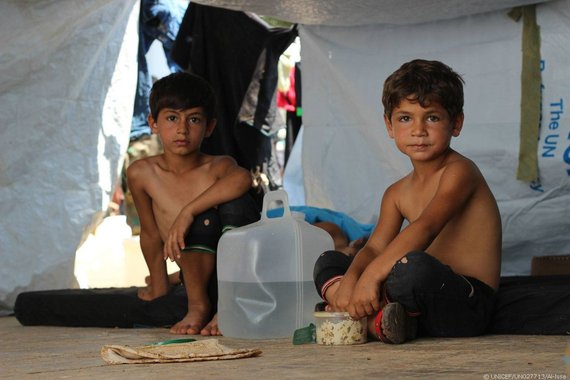 The United Nations and its partners stand ready to provide urgently needed humanitarian assistance following the agreement reached by the US and Russia reinstating the cessation of hostilities in Syria. As we await the green light for the convoys to roll in safety to besieged and hard-to-reach locations across the country, including Aleppo city, it is timely to recall the challenges we face in executing our humanitarian mission.

Over the past several months, the United Nations has been subjected to a range of allegations that it has abandoned its core principle of impartiality in the Syrian conflict. Specifically, the recent decision by a coalition of Syrian NGOs to suspend some information sharing with the UN has been presented as evidence that the UN is being manipulated by the Syrian regime or, worse, complicit in the conflict - that the UN has in effect taken sides.

This is gross misrepresentation of the UN's work in an extremely fraught environment, and one that utterly fails to address the complex and dangerous reality faced by humanitarian workers in Syria, both UN and NGO, throughout the entire country, while putting them at real risk.

First, I want to stress that the Syrian NGOs who have suspended information sharing with the UN include some of the bravest and best that I have encountered in a quarter century of humanitarian work. They represent thousands of Syrian women and men at the front line of the effort to save lives and alleviate suffering. For nearly six years they have faced enormous and sometimes fatal risks in their effort to deliver aid in parts of Syria that many, including the UN, have been unable to reach.

As a reward for their efforts, they have been caught in the crossfire of this brutal conflict - oftentimes, it seems to me, deliberately. They have been bombed, maimed, and killed trying to reach civilians who are being deliberately besieged by forces, on all sides, hell-bent on victory by any means. By many reports, the number of fatalities among Syrian medical and humanitarian workers now exceeds 850.

And even as they struggle heroically on, they see the international community repeatedly fail to demonstrate the political will to resolve the conflict.

Yet, while I share the frustration of the Syrian humanitarian partners, I disagree in the strongest possible terms that the UN has in any way compromised or abandoned its core principle of impartiality. I am also disappointed by the sustained negative media reporting on this, which does not address the real failure: that the actions of the parties to the conflict, and their sponsors, are the sole cause both of Syrians' suffering and of our challenges in meeting their needs.

Portraying the work of the UN and our partners as lacking neutrality or impartiality discredits the work of hundreds of national and international humanitarian aid workers who risk their lives on a daily basis to help people in need. Oftentimes a humanitarian's sole and best defense is his or her reputation for not taking sides, and for providing aid solely on the basis of need. To accuse us of partiality - from a safe distance - is, through the scale of the misrepresentation, to subject us to even greater risk. Such 'armchair allegations' are especially harmful, potentially fatally so, for those brave humanitarians, both UN and NGO, at the front lines, serving in Aleppo or in Idleb, in Homs or in Menbij.

The grim reality is that Syria is a war zone, a particularly pitiless one, where civilians and aid agencies are seen as fair game by all sides. In this context the UN, like every humanitarian organization operating in Syria, has to deal with local conditions, with all actors exerting control on access, tailoring our operations to reach as many people as possible. As in every armed conflict, we are impartial in who we will talk and work with, for the sake of achieving our objective: the delivery of humanitarian assistance.

We are certainly not working hand-in-glove with any of the combatants, let alone aiding and abetting one side over another.

In fact, it is the UN that has spoken out most loudly and frequently to decry these practices, to call for the lifting of sieges and for unconditional access. The Secretary-General and the Emergency Relief Coordinator, Stephen O'Brien, have been outspoken in their condemnation of actions that restrict humanitarian operations. We work every day with all parties, to increase our access and reach. This is precisely why we have a Whole of Syria approach, to join up the hundreds of organizations, including those based inside Syria and those operating from neighboring countries, to draw upon all available capacities to meet needs.

Our approach, from which we have never wavered, is to reach those in need, through all available means, across borders and across conflict lines, in full conformity with our principles of humanity, impartiality and neutrality. In a war such as Syria's, the unpalatable reality is that these principles entail working with all sides. Excluding areas held by ISIL, where there is very little aid, around 60% of people in need are in Government-held areas. To reach these people, we can only work from Damascus and in partnership with relevant players such as the Syrian Arab Red Crescent (who have lost 50 staff killed in the war) and relevant line ministries.

To reach the remaining 40%, we work across both conflict lines and across international borders, tailoring our efforts to achieve most impact. Our cross-border work is done in partnership with neighboring governments, Syrian NGOs and local 'de facto' authorities.

We work with whomever we can, where we can, to get the job done.

Amid the messy reality of conflict, particularly in the context of a conflict as ugly and as bitter as the war in Syria, our core principles invariably come under intense strain. The paradox at the heart of humanitarian action is the occasional, unavoidable need to work with parties for whom our principles are meaningless, if not an impediment. No one pretends this does not entail hard, frequently agonizing choices amid the moral squalor of civil conflict. But what is the alternative? To paraphrase a line of Churchill's, working with everyone, to help as many as possible, is the worst possible solution - except, that is, for all the others.

*Kevin M. Kennedy is the UN Regional Humanitarian Coordinator for the Syria Crisis