The Department of Justice announced Friday that it has found no evidence of homicide in the hanging death of Otis Byrd, a black Mississippi man.

"After a careful and thorough review, a team of experienced federal prosecutors and FBI agents determined that there was no evidence to prove that Byrd's death was a homicide," the DOJ said in a press release.

The department also found no evidence to support federal civil rights charges, which required prosecutors to find "beyond a reasonable doubt, that an individual willfully caused bodily injury because of the victim’s actual or perceived race, color, religion, national origin, gender, gender identity or disability," the release said.

"This is not a homicide," said Claiborne County Sheriff Marvin Lucas, according to MS News Now.

Byrd, 54, was last seen alive on March 2 at a Vicksburg casino, the Associated Press reports. His family reported him missing several days later, on March 8, and his body was found on March 19 hanging from a tree behind his home in Port Gibson. The Justice Department's release did not explicitly state that the investigation had determined Byrd's death was a suicide.

The news release notes that authorities spoke with Byrd's family. Florene Hodge, Byrd's sister, told the AP she believes investigators did "what they have to do and they found it was probably suicide."

Byrd's relatives have stated previously they don't believe he would do such a thing, and announced in April that they had hired private attorneys to conduct an independent investigation into his death. 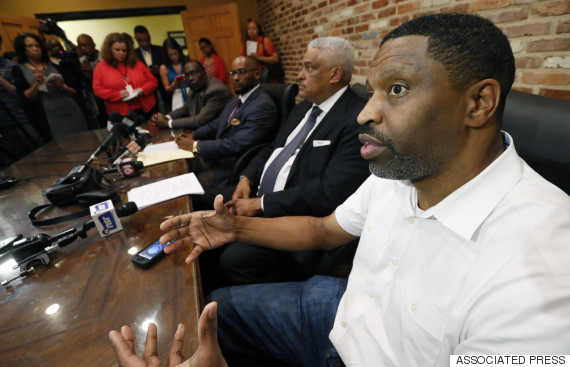 Mississippi NAACP Branch President Derrick Johnson, right, tells reporters about the organization's concern that Byrd's family get the full details about his death, during a news conference called by Dennis Sweet III, second from right, whose law firm has been hired by the family. (AP Photo/Rogelio V. Solis)