Pakistani journalist Shaan Khan's piece "What's Really Behind India's Rape Crisis," published this Friday on The Daily Beast, looks at China and India -- two countries with similarly skewed sex ratios -- and asks why India in the last few years has experienced a "rape crisis," while China has not.

At the outset, one could reasonably object that this premise is itself flawed since statistics on incidents of rape are notoriously unreliable in both countries (the proportion of cases that goes unreported is unknown), and what data we do have shows that the numbers in both countries are actually comparable. The same data also shows that several developed countries have higher per-capita incidences of rape (UN Office of Drugs and Crime, Statistics: Crime (2012)). Indeed, while violence against women in India is deplorable, it is not exactly a local phenomenon. But as we shall soon see, this is remarkably the least serious of the problems with Ms. Khan's argument.

If a social scientist for a moment accepted this false premise, he or she might look at sex education in both countries; might try to study the efficacy of the justice system in both countries; might take the time to interview the survivors and convicted attackers. Yet, all of this proves a rather jejune, superfluous exercise for the columnist. Instead, the answer, she claims, lies in the fact that there is "a total and complete disrespect for women in Indian religious scriptures." Khan goes onto cite three Hindu texts that demonstrate, to her mind, that "at the heart of these ballad-like mythological stories lie lurid tales of sex that glorify rape." These stories condition society to "attach zero consequence to rape."

We once again might reasonably object that there is no justification provided in the piece for said conditioning. Has any convict or rapist justified their actions through scripture or religion? Asking such natural questions, however, would sidestep the blatant Hinduphobia that lies at the heart of Khan's argument. (I deliberately use Hindu here because while Khan repeatedly uses the terms "Indian stories" and "Indian mythology," all of her examples, after all, deal with Hindu texts.) We must therefore confront head-on the question of whether the nearly endless compendium of Hindu itihasas, puranas, and Upanishads condone -- or as Khan even suggests, glorify -- sexual violence towards women.

One approach in dealing with this issue would be to go through each of Khan's examples and demonstrate that they arise from superficial readings of the portions of the text from which they are lifted. This, however, would be giving the argument a little more credit than it, quite frankly, deserves.

For example, how can one shloka buried deep within the Mahabharata (spoken by Bhishma, not by some authoritative voice, as Khan ellides with the phraseology "The Mahabharata ... states") be representative of an epic with 100,000 such shlokas, an epic 10 times the length of the Iliad and Odyssey combined? Yet, make no mistake, this representative-ness is precisely the claim, as Khan makes clear with phraseology such as "at the heart of" and "total and complete."

In fact, the examples Khan cites are so esoteric, I must confess that I do not feel sufficiently familiar with them to be able to analyze them in a meaningful, intellectually honest way. It may not speak well for Khan's argument that a practicing Hindu male would not be familiar with -- let alone conditioned by -- the examples she cites. So, instead, I wish to illustrate to the reader precisely why I was so intensely motivated to write this piece, by recounting stories that I have heard told and re-told countless times during my childhood, from the warmth of my bed to the cool tile floor of my mandir.

Let us start with the Mahabharata, since we've already briefly touched on it. If someone mentioned "violence against women" and The Mahabharata in the same breath, the episode that would most readily come to mind is surely Dushasana's attempt to strip Draupadi in open court and assert his contorted notion of ownership and agency over her. For Khan, every such incident in Indian stories "is given a clean chit. It is merely what macho men do; it is just normal."

Here, nothing could be farther from the truth. What happens in the Hasthinapur court is anything but the norm; in fact, it could be argued that the entire epic turns decisively with this incident, as Bhima promises war as retribution (2.64.10-12), effectively sealing the conflict between the Kauravas and Pandavas that defines the Mahabharata. The text makes amply clear that both Duryodhan and Dushasana have committed adharma, an unspeakably horrid act worthy of censure (e.g., Draupadi: "The dharma of the Bharatas is destroyed... the seniormost of the Kurus take no notice of this savage violation of dharma!"* (2.60.33-35)). In her entreaties to the court, Draupadi cries, "I am the wife of Yudhishthira, lord of dharma, and equal to him by birth" (2.62.11) -- a statement that likely reflects as much on the nobility of both characters as it does the fact that one is not considered superior to the other.

Another story that comes to mind is that of Krishna and Naraksura from the Bhagvata Purana. Like the above episode from the Mahabharata, it is an important one, as it is celebrated by many Hindus as Naraka Chaturdashi on the day preceding Diwali. Naraksura had kidnapped several women and was holding them in captivity, when Krishna and his wife, Satyabhama, learn of the asura's misdeeds. Satyabhama seeks Krishna's permission to lead the Dwarkan army to defeat Naraksura and free the women. Together, they embark to Naraksura's capital with their army and defeat him.

While in one retelling, Krishna kills Naraksura with his sudarshan chakra (discus); in another, Krishna faints in battle with Naraksura, and it is actually Satyabhama who slays him and frees the captured women. Thus, we have a female character defeating a rakshasa who is so consumed by ego that he asserts his power over women by holding them in captivity. In what bizarre world does this story engender sexist, misogynist attitudes? 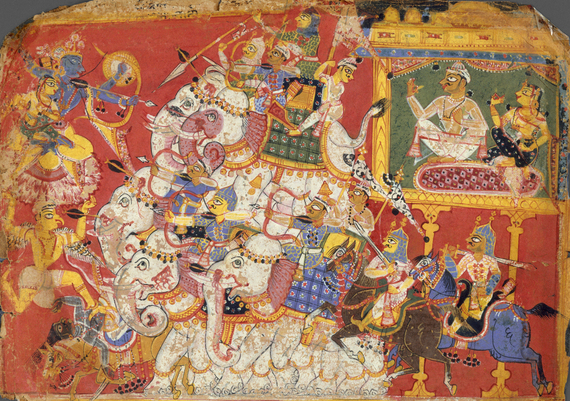 Finally, it is important to note that the examples Khan cites completely ignore the Shakta traditions within Hinduism. When the Devas fail to defeat Mahishasura, they call upon the divine feminine in the form of Durga to defeat the asura. It is precisely this respect and admiration for the divine feminine that, in fact, inspired a campaign called "Save Our Sisters," following the Nirbhaya gangrape in December 2012, which pictured Hindu goddesses with bruises along with the caption, "Pray that we never see this day."

Now, whatever our opinions regarding this specific ad campaign may be, doesn't appealing to the viewer's sense of revulsion and despair at seeing goddesses with signs of sexual abuse point to the fact that the pervasive "glorification" and "normalization" of violence towards women that Khan ascribes to Hinduism could not be farther from the truth?

It should be amply clear to the reader now that Khan's ideas about women and Hinduism are compete bunkum. But one may ask whether I am fair to have characterized Khan's views as Hinduphobia (analogous to anti-semitism and Islamophobia, for instance). I may have erred on the side of giving the columnist the benefit of the doubt, were it not for this gem of a paragraph in which she gifts us her most valuable pearls of wisdom:

Indian mythology conditions people to attach zero consequence to rape. Furthermore, it is not just rape -- all kinds of sordid sex that the modern West would consider taboo is glorified and normalized in old Indian Scriptures. Sex between brothers and sisters, check; parents and children, check; and even with corpses and corpses of dead animals.

What is most scary about this excerpt is not the sheer disgust and contempt that leaps from it, but rather that it distinctly reminds me of some academic work on Hinduism, albeit in a less eloquent, more baldfaced form. It would not be a stretch to say that Khan merely takes the sexual lens of Doniger's The Hindus and Kripal's Kali's Child to its logical, frightening conclusion. But that is an argument that deserves to be made more carefully another day.

In closing, then, we might finally dwell on the connection Khan seeks to make between the spiritual and political. The form of her argument -- argue that Hinduism objectifies women and make a single politician, Modi, "the posterchild" for all of Hinduism -- makes it clear that the "theological analysis" she does is really a means to an end of scoring a political blow against the Indian Prime Minister. This should be clear from the non-textual errors she makes. Leading off with, "In Prime Minister Modi's India, the problem, instead of abating, has become worse," she then gives statistics from before Modi was prime minister; she calls 2011 the "Fiery Hindutva Ideology Days," even though it was the midpoint of the erstwhile Congress government's second term in office.

Laying the blame squarely at "Modi's right-wing goons" and fallaciously blaming Modi for all that is wrong with India does nothing to help victims of sexual violence and abuse in India. Those of us who truly care must strive to eradicate the antediluvian mindsets that still prevail across the Indian political class: from Digvijaya Singh's "sau tunch maal" (100 [ercent good merchandise -- in reference to a female lawmaker) to Kailash Vijayvargiya's "a woman will be punished if she crosses her lakshman-rekha." We must understand the nub of the problem and do all that we can to alleviate it.

But bashing Hinduism in order to do a slipshod hatchet job on the current Indian government? No, that's not helpful. That's just Hinduphobia. Plain and simple.

* Translated quotations are from John D. Smith's translation of The Mahabharata (Penguin, 2009).