Yul Brynner's 1962 role as a political leader on the run from a middle eastern dictator wasn't his finest. The film -- Escape from Zahrain -- is pretty awful. The New York Times review skewered the plot as a "nonsensical tale of an Arab rebel chief... [which] never rises above the level of a comic strip." 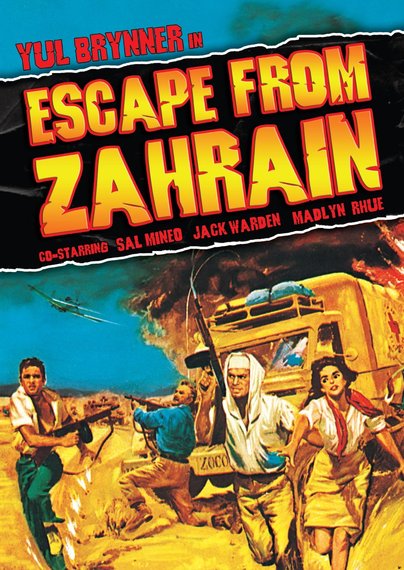 In the film Brynner plays Sharif, a heroic champion of the people who evades the clutches of the evil regime and escapes to organize its overthrow. It's no classic, but parts of the movie appear oddly prophetic. It's set in a fictional oil-dependent Gulf kingdom called "Zahrain" ruled by a corrupt government that disposes of opposition leaders without the niceties of fair trials or due process.

It all sounds a bit too familiar. U.S. ally Bahrain has been silencing its civil society and opposition leaders for some years now, picking off leading figures by arresting them and giving them sham trials.

57 year old Khalil Halwachi, a founder of the opposition Amal group, has a case due in court on Monday June 30 on charges of possessing a weapon for terrorist purposes. He's exactly the sort of guy the government fears -- educated, articulate, persuasive, and with strong international connections. He studied electrical engineering at London's prestigious Imperial College in the mid-1970s and spent 14 years teaching in Stockholm; his five children were born there and have Swedish citizenship.

He was arrested in May 2011 as part of the wide crackdown on those associated with the mass protests for reforms earlier that year, accused of hiding wanted Amal leader, Sheikh Al Mahfoodh. He spent several months in prison. Soon after his release in September of that year, he told me over coffee in Bahrain that he had been tortured in custody, his wry wit undimmed by the ordeal.

In September 2014 he was arrested again, and he has been in Bahrain's notorious Dry Dock prison ever since.

Following years of sham trials, Bahrain's court system has lost all credibility. Every conviction is now viewed with skepticism, and credible reports of tortured confessions continue to emerge. Al Halwachi says the weapon that he was arrested for possessing -- a Kalashnikov rifle -- was planted. The Bahraini security forces certainly have a previous record of doing this.

I was in court at the famous trial of 20 medics in 2012 when the prosecution showed video "evidence" of police discovering similar guns they claimed were hidden in ceiling tiles in Bahrain's main hospital. The time codes embedded in the video showed the film was from days after the police claimed to have uncovered the weapons. Credible evidence is often irrelevant to trials in Bahrain.

Al Halwachi faces up to 15 years in jail if he is convicted. The U.S. embassy in Manama often sends an observer to Bahrain's more prominent political trials, and ought to send someone next Monday.

Train stations in the United States urge the public to adopt a policy of "see something, say something" if they witness suspicious behavior. It's an approach the American trial observers should copy. If they see something suspicious at Al Halwachi's trial -- a judge displaying bias, not allowing defense lawyers to make a case, or refusing to hear witness testimony -- they should say something publicly.

For too many opposition figures in the kingdom there's no Hollywood ending, no escape from Bahrain's miserable system of injustice, fake charges, and show trials. The country's judges show few signs of independence from the ruling family, and too often follow a dangerous political script that Washington should be trying to do everything it can to stop.