By Alex Blank Millard for xoJane

"So," says the woman standing in front of me at the deli counter at the café close to my house, "I couldn't help but overhear you are getting married?"

Meh, I used to work at this café, I've seen her around, no harm in talking. "Oh yeah, in August."

"Oh how exciting!" She says, and she smiles so bright I'm caught up and feel my cheeks stretch too. It is exciting! 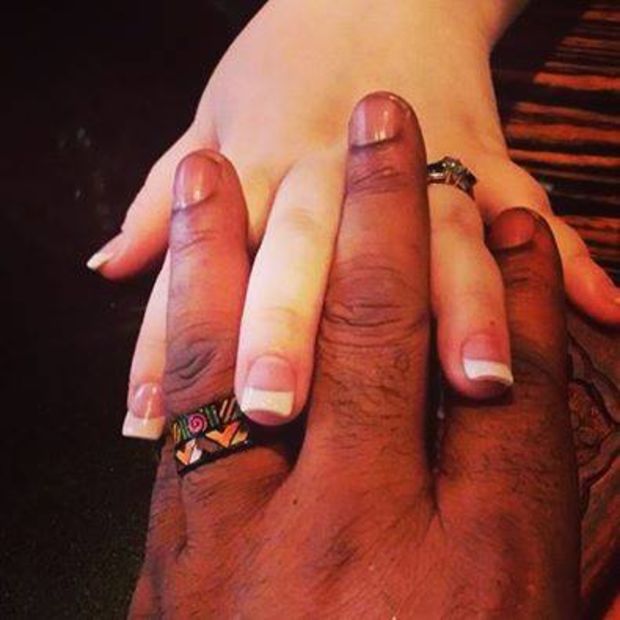 I got him a ring too!

"So," she lowers her voice a bit, "are you going to lose weight for the wedding?"

Long before I would listen to girls vomit up lunch in junior high school bathroom stalls, and before I realized I would be picked on no matter what I wore, I knew one thing to be true. In my southern California kindergarten class, no one wanted to be Miss Piggy.

Miss Piggy was assertive and self-assured and had a super fabulous wardrobe to boot!

But no one wanted to be Miss Piggy.

Miss Piggy promoted her brand, and was not afraid to take up space. She was totally unafraid to take the stage, to take charge, to profess her love for her handsome frog.

But no one else wanted to be her, because Miss Piggy is a pig.

"She's fat just like you!" A particularly unpleasant 2nd grader informed me.

I was chubby-faced and five, and holding Oinky, my favorite stuffed animal. It was the first time I remember being told I was fat, and that it mattered. 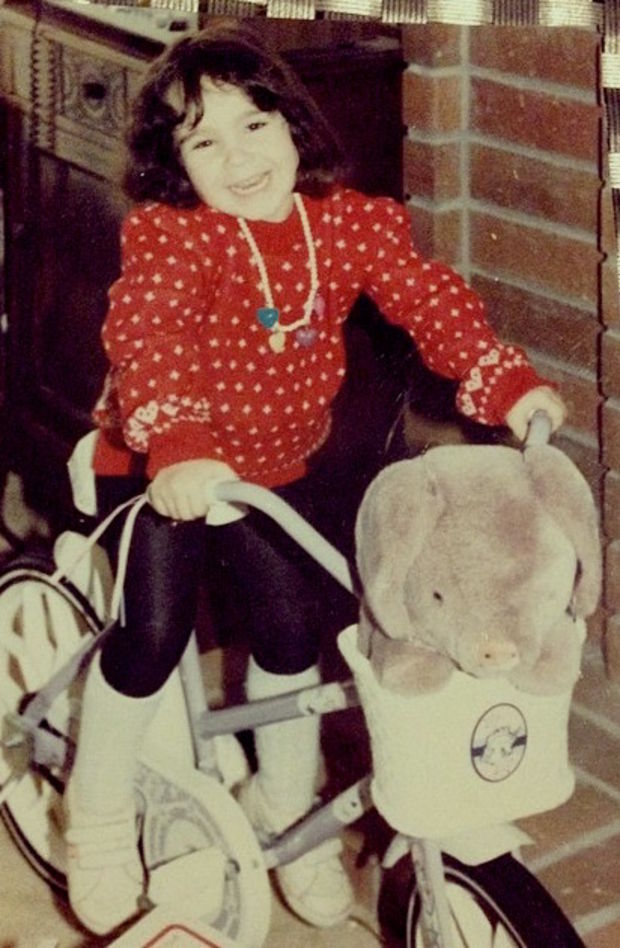 This is Oinky, upstaged only by my 1987 shiny tights and extreme fatness.

I was always short. (I'm 4'11") and I was a rather skinny kid from age six until puberty when I was suddenly covered in curves. It took me years to get used to this body. And it wasn't just that my body had changed, it was that other people treated me differently. It wasn't just that I wanted desperately to wear overalls because I could feel the other 6 graders staring at my growing chest, it was that I was fat, and that was not okay.

In high school, I moved to Philadelphia, which at the time was the fattest city in the United States, and I began to realize that my body is beautiful. Suddenly being "fat" was not the core of my identity. I looked like a person, and was able to learn all sorts of new parts of myself that I had stifled, because I did not feel like it was ok to take up space. I went to a performing arts school, and boy did I take up space.

When I was 20, I took a year off of school to live in NY, and my roommates and I took whatever jobs we could find. I played a jazz singing cat so far off of Broadway, you had to take a train, and my roommate worked at the Gap. He made a LOT more money than I did.

It was around this time that the Gap came out with their "Long & Lean" style jeans. And once a week for a month or so I came in and badgered my roommate:

"Excuse me, sir? Can you direct me toward the SHORT & FAT JEANS?"

I would start off quiet until I got so loud that no one could ignore me.

I know now that I was being incredibly unpleasant for my roommate. (Sorry, love you!) But, in retrospect, it was the beginning of me realizing that large corporations were profiting over women feeling bad about themselves, and that was not acceptable.

In my mid-20s, a workmate showed me Betsey Johnson's clothing website on our break. This workmate was 5'5 and probably 120lbs, maybe an American size 4? "You should totally get a dress here!" she said.

"No way!" she said, incredulous.

"Well maybe you could buy her socks?" 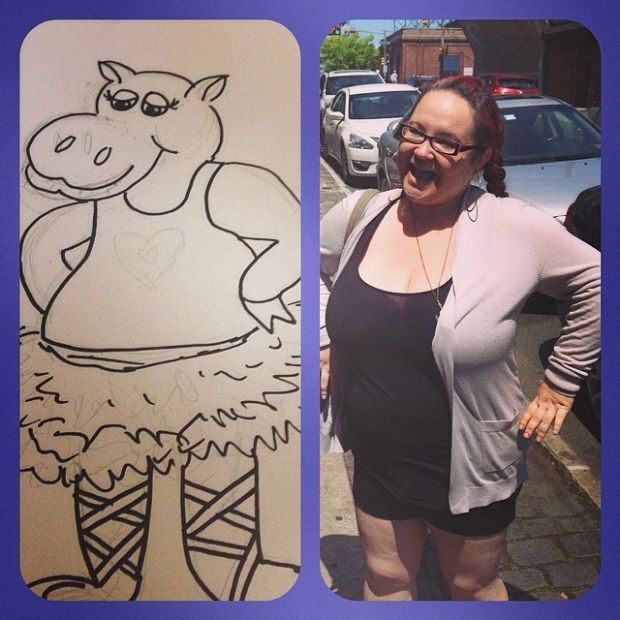 It is ludicrous of me to support a business that doesn't support me. It is a symptom of a broken system in which we reward companies who do nothing to gain us as customers. It is internalized fat-shaming. I cannot count the number of times someone has suggested I buy panties at Victoria's Secret because they don't make my bra size.

I've been fat for a long time. Whereas I went on to become more of a cross between Ernie and Beaker, I'll always have a bit of Miss Piggy in my heart.

And in my thighs.

And if you had asked me five years ago if I were losing weight for my wedding, I still would have thought you were inappropriately in my business, but the answer would have been yes. I would have been over-restricting my eating, exercising more than I do, over-extending myself, frantically planning to wear a dress that was two sizes too small when I bought it.

It took me so many years to understand that my body is beautiful. I had a lot of moments where I was close but it is really, really hard to hear the good when you are surrounded by so much shame. Even as a healthy adult, far away from the playground, my fatness is not okay with a lot of people who, frankly, don't own my body. And, honestly, it doesn't matter whether I am healthy or not, if you think my body is your beeswax, think again, human.

I am also aware that body-shaming does not just happen to people who are fat. People are often judged for being "too skinny," "too tall" for having body-shapes that are not "normal." When we don't like a politician, we call him fat, when an actor's thighs do not touch, we ask, "Does she even eat?"

But let me ask you this: even when you are upset that someone is mean/willfully ignorant/just plain rude, isn't choosing to make fun of how they look, at the very least, lazy? Can we not do better?

When we body-shame Chris Christie -- instead of discussing his disrespect for constituents, his incredibly narcissistic attitude, and his utter disregard for the law -- we are also body-shaming perfectly lovely people who just happen to have similar bodies. Can we not do better?

When we body-shame Rush Limbaugh, instead of pointing out his extreme bias against women and people of color, can we not do better?

When we body-shame Gabourey Sidibe, Hilary Clinton, Prince Fielder, Renée Zellweger, Jill Scott, Lindsay Lohan, Melissa McCarthy, Michelle Obama, instead of acknowledging the work that they do, the sports that they play, the art that they make, or the actual faults that they have, can we not do better?

So no, I won't be losing weight "for my wedding." Our wedding is a celebration of the partnership we will continue to work hard to nurture. It is not a time to dread, starve myself, or force difficult change. And if it is for you, it's also none of my beeswax, so I'd really appreciate it if you keep your thoughts about my body to yourself, thanks.

Soon I will stand in front of my family and chosen family and make promises to a partner I love deeply. I will tell my community the many, many reasons I love my partner and most likely gush about how often he shows me he loves me.

He doesn't love me despite my thighs.

He doesn't love me even though I have a belly.

He doesn't love me, while waiting for me to become thin. 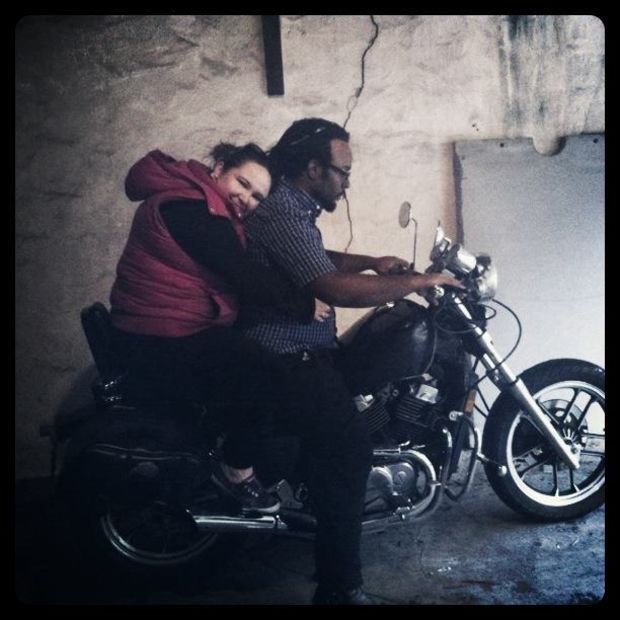 And, my goodness, do I love him.

And, no, though no one has ever asked, he won't be losing weight for our wedding either.