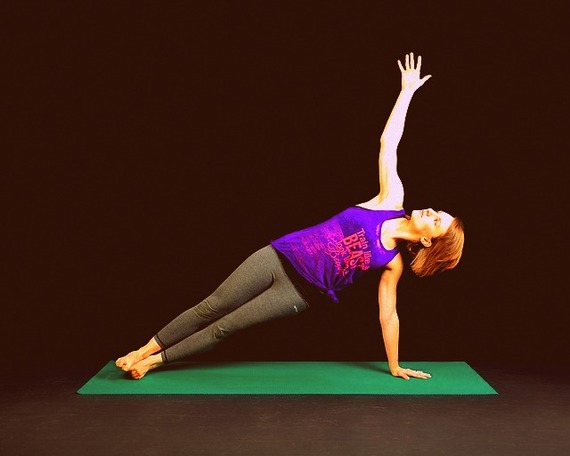 There seems to be a new trend in our online culture of people hating on others who love to workout. It's almost like a fitness backlash of sorts. Sadly, this seems especially true of how women are behaving with each other.

There's so much discussion about body shaming on the internet, but in real life, I hear women tearing each other down quite often over -- of all things -- physical fitness choices.

I've actually overheard women making statements to each other such as, "Well, she must have no life if all she does is workout -- I don't have time for that." Or, "What a bitch. She thinks she's all that just because she works out."

I already know I'm not a bitch just because I workout. In fact, Exercise probably saved my life.

I've been on my own body journey for many years now. I started working out after a particularly crushing break-up and an extreme bout with anxiety and depression.

What I had been going through felt so emotionally painful that I literally thought I was losing my mind. I had also gained about 20 extra pounds on top of everything else.

I didn't know what else to do about my spiraling mental state, so I went to my doctor. I was prescribed anti-depressants. After several months I realized the pills weren't for me. They numbed my emotions and I felt like an alien. The pills did reduce my depression somewhat, but I still didn't feel quite like me. I missed the old me.

So, I stopped taking the pills (something you should always check with your doctor about first!) and decided I needed to do something else to get myself back on track mentally, emotionally, and physically.

I started by signing up at a gym. Then I took a yoga class. After that, I tried Pilates. That's when the clutter in my mind and the sense of hopelessness started to diminish. As I began to focus on feeling and moving my body, I became more connected to myself.

When I added walking and running outside into my routine, I felt even more amazing. I was fitting into my old clothes again and my mind was finally starting to open up to all of the opportunities of living.

I gave up dating for about 2 years. I invested in myself. I starting evolving into someone who could potentially be a better partner for someone down the road in life. I had more goals, more confidence, and more enthusiasm for the future.

I felt fit and attractive because I was working out. There's nothing wrong with that and I would never apologize for that let alone degrade anyone else for feeling that way.

When I go out in the world now I have pride in how far I've come from where I used to be. You simply never know what anyone is going through and the reasons for why they do what they do.

Having intense anxiety on a daily basis is no joke. I had it and it affected every aspect of my life. During the period of my life when my anxiety was at its peak, I was not handling anything well. In fact, I was drowning in fear and nervousness.

Exercise alleviates my anxiety and helps my mind focus. I'm not exactly a fitness guru or the most amazing physical specimen you've ever seen, but moving my body and losing weight has brought me to a place in my life where all I can see are limitless possibilities.

Now, by no means am I suggesting that people with serious mental problems toss their meds out the window and cure themselves with yoga. I'm not qualified to say anything like that. But this is what ended up working for me.

People I know who can't stand exercising often imply that those who do work out on a regular basis are vain or narcissistic. Maybe some people are, sure. We all want to look good to some extent but there's a lot more to my story than pure vanity.

I see all the internet memes floating around making fun of those who love to workout or who have made exercise a big part of their lives.

But what many people haven't experienced for themselves is how moving your body during exercise can actually be therapeutic.

I know that we believe a lot of what we see and read on the internet, but working out is not necessarily just about showing off or posting workout selfies every 10 minutes. I know many people who do that and many people who hate that. There's a simple solution for it. Either don't look at it or do something for yourself that makes you feel good instead of sitting on Facebook or Instagram, criticizing others for being excited about their fitness goals.

I don't post workout selfies. It's not my thing. But I get it. I understand the sensation of being proud and accomplished when you make changes in your body and life.

Anyone can make time to exercise. I would say that if you're working out rather than standing around criticizing someone else for their fitness choices, then your life is probably a lot more productive overall.

Body-shaming sucks. That's a no-brainer. But shaming people who actually want to better themselves by participating in physical activity so that they can live longer, happier lives is just plain wickedness.

I exercise because I learned how to love myself in a way that's not destructive. I found something that satiates my anxiety. I'm not doing it to win a beauty contest. I'm doing it for my well-being.

Now that I have a family and fairly busy schedule I still make time for working out. It doesn't matter if it's 10 minutes of sit-ups and squats or a quick 20 minute jog. I fit it in.

If you don't like to exercise, fine. But you don't need to make fun of or hate on people who do. Let other people experience healing and happiness in their own way. You don't always know where people are coming from on their personal journey. Most likely they're just trying to make themselves better people.

More from me: 5 Amazing Things That Happen When You Ignore Negative People