It was date night -- the first one since I'd had our new baby, 12 days before. We'd just finished our dinner and decided to stop by the store to pick up a few baby necessities, since our son was sleeping soundly in a car seat and the other five were at home (hopefully) asleep with a sitter.

We were almost through the checkout line when a woman rolled into line with her grandbaby sitting in the basket, chattering in an unknown baby language. Her husband stood behind her.

And because I'd just pulled up the car seat cover to check on my little one, she noticed him and said, "Oh my goodness! You have a brand new baby!"

"Yes, ma'am," I said politely as my husband stood paying. I turned to put the bags in the cart.

That's when her husband said, "Oh, looks like she's got another one on the way!" -- all excited and proud of himself for noticing.

And I swear we heard that woman say, "Uh-oh," while my husband and I tried to hold it together. We made it all the way to the exit doors before we burst out laughing. We laughed all the way home.

The next day, 13 days postpartum, we stopped to get an oil change at this place my husband always goes to, where you can just sit in the car while they do a quick change. No kids need to be unbuckled or entertained or chased away from the parking lot. Easy peasy.

The attendant knew my husband, but I'd never met him before. Still, when we were leaving, he assumed familiarity, calling, "See you soon, man," to my husband, and then flippantly remarking, "Not you, I guess. I'll see you after."

My husband quickly rolled up the window, and I tried not to laugh while in clear view, until my husband said what I was thinking: "After what?"

Some men are just clueless.

But lest we go easy on females and just chalk it up to men not knowing any better, I must tell you the story of a woman we met at a park just one week after I gave birth to twins three years ago.

Our twins were born six weeks early, so we had to leave them in neonatal intensive care for a while, but because our other boys weren't allowed in the NICU unit, and one of their birthdays was coming up, we decided one day to take them to the park.

They were playing like children do, making friends with another little boy, and his mother ambled over. We got to talking about how I only have boys, and it wasn't long before she gestured toward my postpartum belly and said, "Is this one a girl?"

"Oh, no," I said, laughing, because I knew this was about to get awkward, and I really didn't blame her, because my uterus had a lot of shrinking to do after twins. So I kept it nice and gentle. "No, I just had twin boys six days ago. They're in the NICU right now."

She nodded and said, "Oh," like she understood, but clearly she didn't, because her next words were, "So, when are they due?"

I had to explain it all over again, and she apologized profusely and then gathered up her son and hightailed it out of there.

Nine years ago, when my first baby was born and those eating disorders and body image issues still stood way too close, these experiences would have really bothered me -- but today I know the truth of it. I know that something incredibly amazing happens to a woman's body when she's growing a human being. I know that in the days after, her stomach won't just POOF! back into place.

You see, the uterus has fed and housed a new baby for nine whole months, and it can't be rushed in its shrinking back to normal. Shrinking takes time. It's not done in a day or a week or even three. For a time, we will still look just a little bit pregnant, with a bump that could go either way.

So, when is it OK to assume that a woman is pregnant?

But if you really want to try, and you're feeling brave, here are some (mostly) foolproof giveaways:

1. She doesn't have a newborn baby with her.

2. She tells you she's expecting.

If you've checked all the above, there's one really important one left:

4. Her stomach looks like it's housing an oversized basketball, she's almost doing a standing backbend and she's waddling significantly. And I mean significantly, because tomorrow is her due date.

That's it. Any other time? Just keep your mouth shut. 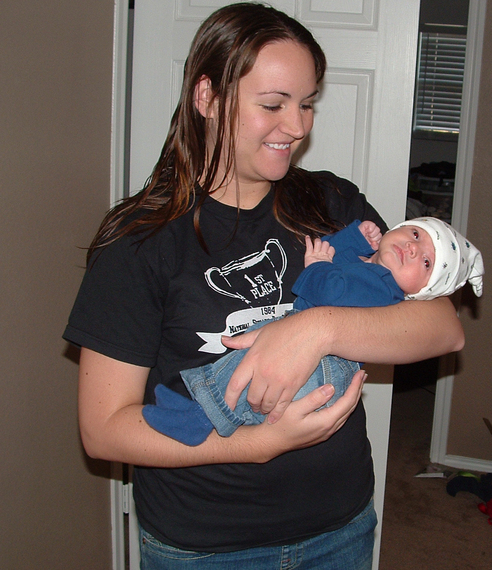