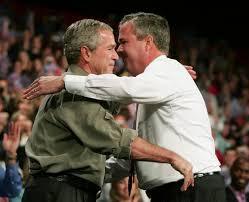 Jeb! Bush thinks he can avoid being tarred with the stain of his brother's failed presidency by shifting the blame for the chaos Dubya unleashed in Iraq.

That premature withdrawal was the fatal error, creating the void that ISIS moved in to fill. Where was the secretary of state, Secretary of State Clinton, in all of this? Like the president himself, she had opposed the surge, then joined in claiming credit for its success, then stood by as that hard-won victory by American and allied forces was thrown away.

"This is a pretty bold attempt to rewrite history and reassign responsibility," said Jake Sullivan, Mrs. Clinton's senior policy adviser and her former aide at the State Department. "They cannot be allowed to escape responsibility for the real mistake here. They might hope we'll all forget, but the American people remember."

[snip] Mrs. Clinton's aides noted that the Obama administration had inherited the war from President Bush and that it had followed the timetable he signed in withdrawing troops from the region.

Here's Michael Cohen at The Atlantic:

The decision alone to go to war in Iraq, an unnecessary and pointless conflict based on dubious intelligence and hyped threats of nuclear, biological attack, would place Bush squarely in the cellar. Yet there is so much more. In making the case for war, Bush ran roughshod over the international system that his own country had helped to form; angered and undermined key allies and cratered the US image in the world. A failure to prioritize post-war planning ensured that a successful military victory against Saddam Hussein turned into a long-term and disastrous occupation that weakened America even further. It's pretty hard to fight a war that literally does not one thing to further US interests and strengthens the enemy you nominally went to war against in the first place (al Qaeda), but Bush accomplished that feat.

Iraq also diverted necessary resources from the war in Afghanistan and the fight against al Qaeda (leading to further escalation and American loss of life after Bush left office). Bush's second term Freedom doctrine to spread democracy around the world failed badly and opened up the US to charges of hypocrisy (it also led in part to a Hamas government taking over in Gaza). And Bush offered little response as North Korea officially became a member of the nuclear club during his presidency. Bush supporters will argue that it's too early to judge the success of his foreign policy performance. Perhaps, but early judgments are in; and they're not good. It's pretty hard to imagine any situation under which that judgment will be reversed.

Cohen's long essay compared the foreign policy record of every president since the beginning of the twentieth century, and summarized Dubya as follows:

After all there are bad foreign policy presidents . . . and then there is George W. Bush.