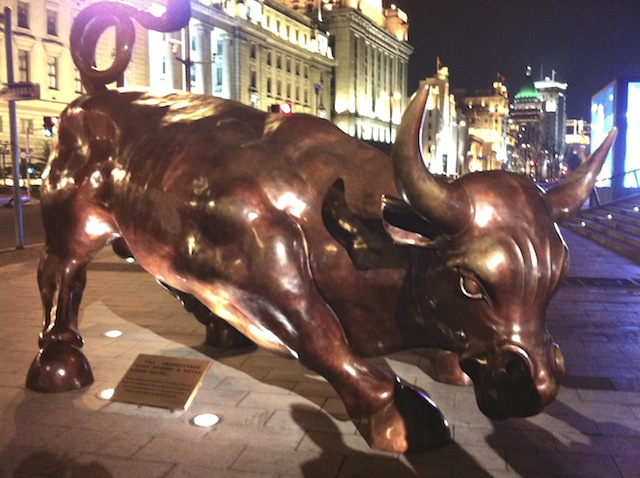 This week's job numbers came in weak , economic growth is "tepid," U.S. factory orders disappointed, and the stock market had another record close. There was a time, when stock prices and corporate performance were tightly correlated to the economic reality that most Americans experienced on a daily basis. Now, big corporate profits and stock returns appear to be primarily tied to regular doses of federal largess. Anytime the market takes a 2% dip or the administration gets word that bad economic news is about to be released, the Fed swings in like Robin Hood in reverse, to rescue America's upper class from a possible bad lunch.

It is becoming more and more obvious that none of this is doing American workers much good. Job creation is flat and the jobs that are "created" can't support an individual, much less a family. The Wall Street Journal noted, "the proliferation of low-wage jobs is leading to anemic growth in incomes." Worse, the primary reason for the declining "official" unemployment rate is the growth of discouraged workers "leaving the work force." More than six million Americans who want work aren't counted anymore, making a total mockery of our government statistics. The real unemployment rate, simply defined as folks who want a job but cant' find one is closer to 25%. If you add in those working far below their skill sets, its gotta be well over 30%.

Yet, despite what is essentially a depression, the stock market rocks on. The reason for this is that the stimulus is really aimed at appeasing the "free market conservatives" who populate Wall Street banks and the executive suites of our multinational corporations. No wonder they contributed so much to this President's re-election (and his opponent, just in case.) They've come to love big government. By simultaneously driving domestic taxes and regulations ever higher while opening our markets to competition from the untaxed and unregulated, our multinationals have been created a system where returns to U.S. capital invested abroad grow ever higher while returns to U.S. labor decline. Further, the globalized business environment with its convoluted laws , complex logistics and high capital requirements presents insurmountable barriers to entry for entrepreneurial firms. This stymies the capitalist process of "creative destruction" and crushes the technical innovations that normally threaten entrenched incumbents. Good times for corporate America, bad times for our engine of growth.

Ironically, this same system creates jobs, wealth and power in China while simultaneous laying the groundwork for Marxism in America. Need a map to where economically bifurcated democracies wind up? Just Google "Venezuela." As a Chinese Communist Party official once remarked, "The road to Communism may take well over a hundred years and the transition doesn't have to be violent." (note: He wasn't talking about China.) It looks like that road is being well paved and comrade Bernanke is putting the pedal down.

Greg Autry is as an Adjunct Professor of Clinical Entrepreneurship with The Lloyd Greif Center for Entrepreneurial Studies at the Marshall School of Business at the University of Southern California. He serves as Senior Economist with the American Jobs Alliance, Economist with the Coalition for a Prosperous America and is co-author (with Peter Navarro) of Death by China: Confronting the Dragon -- A Global Call to Action.