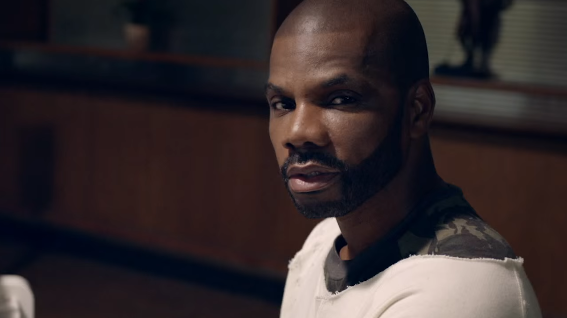 I love gospel music. I love the tradition from which it speaks. Gospel is the music of emancipation, using religious language to demand an end to racial oppression and fight for equality. Today, gospel music finds renewed fire in the contemporary civil rights movement, as the monstrous civic discrimination against Black bodies moves to the center of our discourse about American society.

Kirk Franklin is arguably the most recognizable face of gospel music today. He unthinkably pushed the genre onto mainstream radio in the 1997 with the slickly produced "Stomp (Remix)." Unfortunately, Franklin's ideology lacks the depth of his musical, and, at the risk of sounding cynical, marketing skills. He uses a combination of sex appeal and sex shaming to sell albums. The result is bizarre. It's a strategy that finds him blabbering about his "pornography addiction" on "The Oprah Winfrey Show" before posing shirtless in a boxing ring for a gospel album cover.

There's a sort of desperate masculinity to the whole thing, which manifests itself in open homophobia. He wrote in his 2010 book "The Blueprint: A Plan for Living Above Life's Storms" that Christians must "never compromise what the Bible says about homosexuality." He calls a "desire for the same sex" a "struggle," which sounds more like projection than theology to me. But I digress.

Enjoying Franklin's fantastic, choir-based albums while attempting to ignore the man producing these overwhelmingly uplifting songs has always been a challenge. But it's a challenge consumers routinely face. (Chris Brown, anyone?)

While I'd mostly succeeded at ignoring Franklin as a human up until this point, he released his new album this month. I excitedly popped in my earbuds and was greeted by Franklin's spoken-word opener. I braced myself. Kirk Franklin talking never seems to end all that well. The title, "Losing My Religion," made me instantly nervous. But I didn't expect to be assaulted by anti-LGBT sentiment.

"[L]ove wrapped in truth, that's the gospel he needs," Franklin condescendingly says of a gay man in the song. It's "hate the sin, love the sinner," repackaged for 2015 as an even more insulting brand of homophobia.

Franklin proceeded to use LGBT people as a part of a giant marketing stunt for the new album, giving an interview to The Grio where he "apologizes" for the way "the church" has treated gay people.

"I want to apologize for all of the hurtful and painful things that have been said about people in the church that have been talented and gifted and musical, that we've used and we've embarrassed... and all this other horrible crap that we've done. We have not treated them like people. We're talking about human beings, men and women that God has created."

Yes, Franklin actually said, "talented, gifted and musical." This cartoonish marginalization is par for the course with the man who once suggested that people should thank god when they "drive by someone livin' up under a bridge," because it's a reminder that god didn't leave them homeless too. Apparently, stopping the car to offer housing or a hot meal didn't occur to Mr. Franklin.

Kirk, along with colleagues like Donnie McClurkin and Nicole C. Mullen, preach an exclusionary, egocentric gospel that stands at total odds with the core values of the civil rights movement. Bigoted gospel artists harm the Black church, and, by proxy, the Black community, when they use their voices to spread prejudice.

The Center for Black Equality publicly denounced Kirk Franklin in the past after he received $80,000 to perform from the government. CEO Earl Fowlkes said, "I would not want my tax dollars to go to anyone who espouses which is in essence homophobia any more than I would want my tax dollars to go toward anyone who espouses racism or who was anti-Semitic. It's just not appropriate."

LGBT people have marched alongside civil rights leaders since the era of Dr. Martin Luther King. Conversely, Black Americans have marched with us throughout the movement for LGBT equality. It goes without saying that a large portion of the LGBT population in the U.S. are people of color. The NAACP even officially endorsed marriage equality in 2012.

Kirk Franklin doesn't represent the Black community, and his crossover appeal is dangerous, because many white Americans think he does.

Rejecting subtle attempts at discrimination by gospel figures is important, because these figures play a part in framing the civil rights dialog and literally write an integral part of the script that informs the way Christians worship.

So, no, I don't accept your dubious "apology," Kirk. When you decide to come correct, I'm happy to forgive you. Until then, stop trying to frame your bigotry as anything other than the personal insecurity that it actually is. From a gay Latino man raised in a Baptist church, I can say with some authority that you're hurting us all.

Image by Kirk Franklin, adapted from "Wanna Be Happy" via embedded YouTube clip.