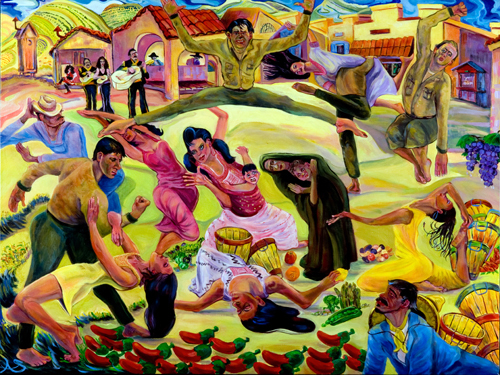 This so-called "surge" of fifty thousand or so women and children are not in over-crowded refugee camps in Europe, Asia, Africa, or the Middle East. They are not trying to steal themselves into America. They are not a risk but are handing themselves over as victims displaced by war. Many are here to reconnect with their family already melted into the pot. There is no need for political finger-pointing to agitate one's political base over this crisis. Folks are already disgusted enough. This is happening at our border and although rare, this is not an unprecedented humanitarian border crisis for America.

Back in 1980, America managed another humanitarian border crisis. During the Mariel boat lift episode, well over 125,000 Cuban refugees that flooded Miami between a Fidel Castro and Cuban-American organized exodus were assimilated amongst the free and the brave. Many families were reunited for the first time. But crafty communist chameleon Fidel Castro slipped into the huddled masses many of Cuba's undesirables, their prisoners and mentally ill to free Cuba of this unwanted economic burden. Americans proudly lived up to Lady Liberty's ideal until discovery of Castro's ruse created such a political nightmare for President Carter that he had to turn off the "lamp at the golden door" to plug the dike to stop the leakage of "the wretched refuse of your teeming shore."

History also reminds us of "The Voyage of the Damned," where American's response was tragic, pathetic, and political. In 1939, the ship MS St. Louis carrying almost 1,000 huddled masses of "the wretched refuse" of German-Jews seeking asylum in the land of yearning to breathe free was turned away and had to return to a Europe being swallowed up by Nazism. Frantic anti-Semitism, especially from Southern Democrats, put pressure on President Roosevelt to lock the golden door.

Here is what needs to happen in our current crisis. Stop listening to wannabe-presidential-guy-in-2016 Texas Governor Rick Perry from ground zero trying to score points with some "constituency" as he explains this mess from his perspective, which sounds as though he must still be eating those painkillers that screwed up his shallow and foolish presidential run in 2012.

President Obama should go to the border "lifting the lamp beside the golden door." He should be photographed hugging the children and taking in the sorrowful sight of fleeing refugee children and mothers of war-torn Hispanic nations to remind the world that the man of drones and meta-data surveillance is compassionate and deserves his premature Nobel Peace Award. Why not hug the suffering, that's what politicians always do best.

As well, Senators and Congressmen throughout the land should be the first one on their block to go down to the border lifting up the lamp, hug the huddled masses and finally do some real work, spend time as relief volunteers, and while doing so, find commonality in their new found humanity to pass the best border and immigration reform legislation. They could even bring their bibles. No harm done. These are the images Americans need and deserve to see. No longer give me politics marketed in miserly, xenophobic, selfish, myopic, nihilistic and pettiness behavior. Pass the budget to pay the bills to keep the lamp lit to inspire our world.