CONSCIOUSNESS APP from Subtangle on Vimeo.

The world reads news together. The world listens to music together. But can the world feel together? And furthermore, can this shared awareness - this collective consciousness - actually impact the physical world?

What would you do if you could tap into that collective consciousness?

Hardware hacker Adam Michael Curry wants to do just that, by releasing a smartphone app based on scientific research that suggests human consciousness can influence physical reality. 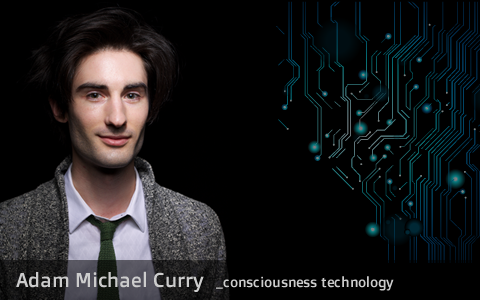 The app, aptly called Collective Consciousness, is already generating some serious buzz around its potential. It's backed by a team of leading consciousness researchers and Silicon Valley techies, including Dean Radin of IONS, Robert Jahn of Princeton University, and Joey Primiani - Lady Gaga's own tech boy genius.

Here's the idea. Laboratories like Princeton University's PEAR lab, the Institute of Noetic Sciences, and others have been doing experiments to look at how deeply consciousness (our minds) are connected to the fabric of physical reality. They've shown some interesting results that our minds can have an unexplained ordering affect on chaotic systems. The Global Consciousness Project has been showing that a few dozen such systems, called random number generators spread around the world can produce anomalies when global events happen that polarize human attention. Most famously during the attacks of 9/11. 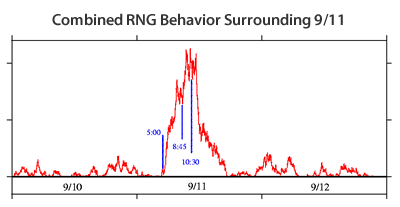 The odds that the combined Global Consciousness Project data are due to chance is less than one in one hundred billion. The implication is that there's some deep connection between the mind and physical reality, which we don't yet fully understand.

When downloaded, the Collective Consciousness app turns your phone into just such a random number generator, so you can explore the effects yourself. This data is uploaded from users around the world, to create a living network of consciousness information. It's an inquiry into the nature of mind, global consciousness, and the possibility of creating a new kind of "consciousness technology." Sci-Fi fans rejoice.

Me, I'm not a scientist, nor do I play one on TV, thus these thoughts are in a jumble as I hasten toward the birthday party of the one and only Nichelle Nichols -- she of original Star Trek fame ("Hailing frequencies open!") -- where I am to interview Mr. Curry as he presents Ms. Nichols with his impressive "Mind Lamp" (in brief: a glowing tube which changes to the color one contemplates!). It's based on the same technology as his app. 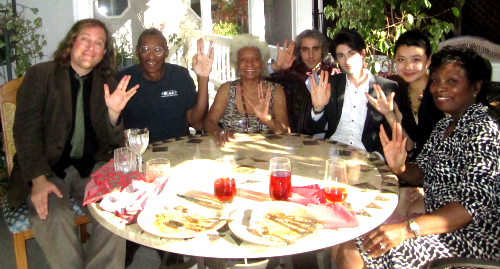 He's a disarming figure, this Mr. Curry, with his tony togs and boy-band coif, and an unexpectedly reassuring one to boot, comforting the nodding non-scientist with gentle coos of "That's a good question."

"I was super skeptical about this research at first," says Mr. Curry. "There was a lot of internet hate speech against scientists who studied consciousness. And on the other side, a lot of wild claims by believers. But when I actually read the research papers and rebuttals I was blown away at how much evidence existed. Both sides of the debate were mostly ideological, and less data-driven. But that was ten years ago. Since then, mainstream science has started to embrace consciousness -- the mind -- as a thing that needs to be studied for the mystery it is."

The potential for consciousness to influence chaotic systems is called mind-matter interaction. It's still controversial, but is getting lots of mainstream attention these days. (This month 80 scientists including a Nobel prize winner called for more research into the field).

Over joyful whoops from the nearby Nichols kitchen, Mr. Curry continues.

"Far more exotic ideas are popular now. Like, 'Do we live in a virtual reality?'"

"Are we just brains in jars?" I suggest, knowingly. Adam concurs, laughs, and shifts into academic gear.

"These are small effects, behave strangely, and are not predicted by our theories, which is why scientists have been divided on them for so long," says Curry. "But that's starting to change. The possibility is more parsimonious with contemporary thinking about consciousness and physical reality. I think that even though we don't fully understand it, we know enough now to harness that interconnection and do cool stuff."

Smart fellow, and turns a phrase with grammatical adroitness. I decide that I like Adam. While consciousness makes its transition into popular science, Curry sees an opportunity to cut ahead of the curve, betting that mind-matter interaction will become a new kind of "consciousness technology." 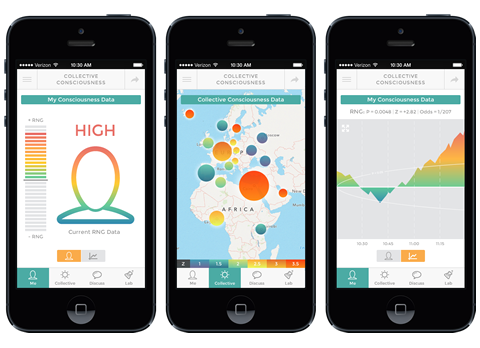 Thus do we find ourselves with the seed of an idea - our minds interacting with our phones in a new way - but enough to grok the basics of how Adam's app could work. You couldn't write a script this cool. Well, maybe you could. But at this moment, the lady of the day herself: Nichelle "Uhura" Nichols, calls out, "I hear people!" from the staircase, and descends to join us crewmen. It wouldn't be going too far to state that our collective consciousness has radically shifted the energy of the afternoon: it has become a party, a party with Nichelle. And her sister, and friends. Brilliant.

Somewhere in the mix, Adam's adviser Michael Mazzola pulls me aside and fills in some details. The unassuming Adam is a pretty accomplished kid; as a teenager, MIT named an asteroid after him for inventing a method to help forecast seismic events, like earthquakes. He has his hands in multiple projects, and lives, rather romantically, in the converted attic of a theatre in San Francisco. 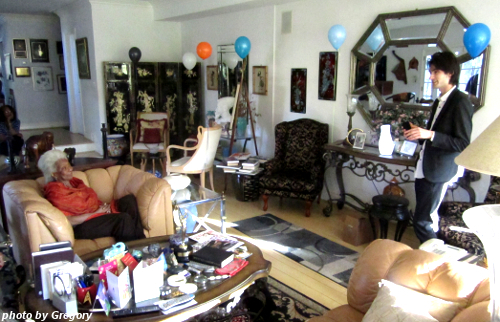 And now, a little experiment: Nichelle and her partygoers gather around Adam and the mysterious little lamp, which glows ghostly white. The lamp employs a random number generator similar to the mechanism in Curry's app. Each possible color is an equal probability outcome of this random system, and Nichelle is instructed to use her mind to tip the scale towards the color she desires. We are mesmerized as the lamp slowly fades to red, indeed the color she intended. We repeat this experiment several times, the lamp always obeying the intention of the group.

Astonished but satisfied, Nichelle reiterates her oft-quoted thoughts on consciousness: "I've grown up just thinking that what people refer to as 'powers' are a natural extension of our lives, of our abilities, and are hidden somewhere in that 90% of our brain that even Einstein hadn't used yet."

I retire with Mr. Curry to the music room of the Nichols household. The original Vulcan lyre hangs on the wall. I want to know what motivates him. "I'm fascinated by big ideas like the Singularity, and whether the Internet is becoming conscious," Curry says. "The Collective Consciousness app is an audacious project, but I believe in asking big questions. And the benefits could be huge. This project may force us to confront the deeper interconnection between everyone and everything. That could forever change our society."

And who knows. Maybe Mr. Curry's greatest hack yet will be the interface between consciousness and the fabric of reality. The Collective Consciousness app will be free, and the team is crowdfunding the project over at Indiegogo.

Look out! The Singularity might be closer than we think. 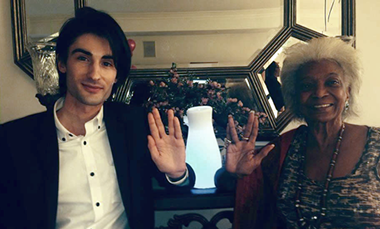