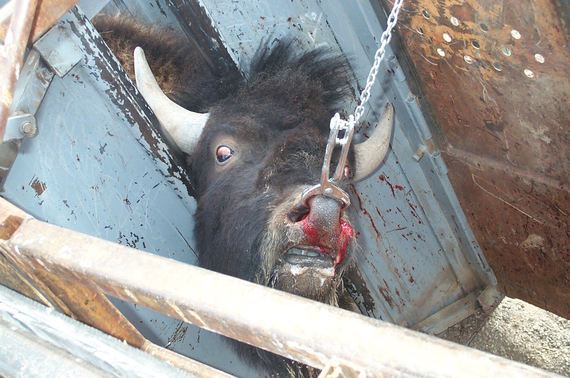 We've seen it before with the wild mustang horse roundups, the hunting of wolves, coyotes and other predators, black bear hunts and now Yellowstone Park is going to send over 900 bison to slaughter to appease local cattle ranchers. According to the National Park Service website, the operation will run from February 15, until March 2016.

The fight to stop the slaughter has been impeded by the park service closing the bison roundup to the public. Recently one journalist, Chris Ketcham, who has been following this issue for a number of years teamed up with Buffalo Field Campaign, the Animal Legal Defense Fund, a private law firm, Fuller, Sandefer & Associates and two University of Denver law professors to sue the National Park Service to gain access to the operation for documentation purposes. Unfortunately, on February 5, U.S District Judge Scott Skavdahl denied the request. As animal rights activists gain ground in the protection of animals, the opposition uses their money and muscle to squash rights. We can see this in the multiple ag-gag laws coming into play to hide abuses at factory farms and slaughterhouse, the instigation of the grossly unconstitutional, Animal Enterprise Terrorism Act, and smaller acts like the closing of the bison capture for groups and journalists who want to bear witness.

In one heartbreaking report by Ketcham, he describes the bison operation as the park services sort bison for slaughter. The magnificent beasts are crammed into chutes to be tested for brucellosis. These huge animals panic under such extremely stressful conditions and climb on top of each other as wranglers jam hooks into their noses. The bison's heads are forced up, and as their eyes bulge in fear, a needle is punched into their necks to test for brucellosis. Ketcham also reports on how the U.S Department of Agriculture's Animal and Plant Health Inspection Division jam dildos into the arses of bull bison to make them ejaculate to collect semen samples. I call this rape. It's disgusting and the desultory excuse of conservation pales in the face of such behavior. 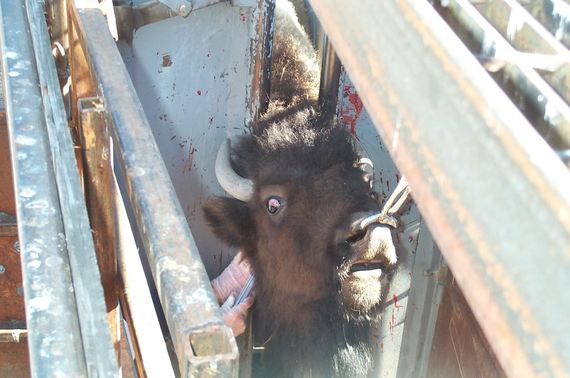 In two videos posted on YouTube by the Buffalo Field Campaign, entitled Welcome to Yellowstone and Shame on Yellowstone, the brutality is clear. The fear and stress are palpable in the animals as they are goaded into pens; some are made to run injured. The videos are hard to watch. The injuries from gorings are obvious, one young bison is repeatedly gored and smashed against by larger animals in the confined space. His or her stress heaves out of his/her nostrils as the poor animal tries to flee the attacks. There is nothing manly about these round-ups, there is no John Wayne type hero in control, there is just vicious, brutal exploitation of magnificent animals by people who are making money and influenced by the good ole boy network of cattle ranchers. 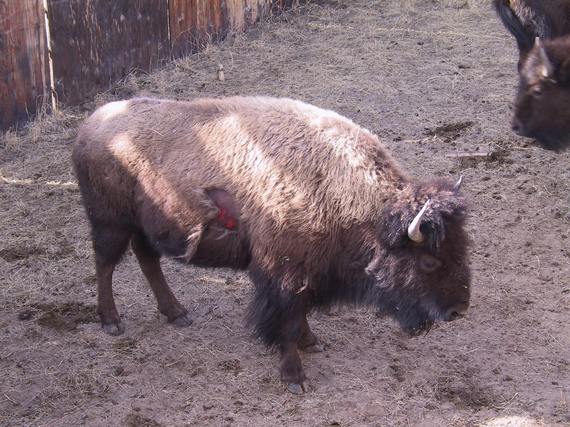 Image: National Park Service/Public Domain (Female bison inside one of the Stephens Creek bison trap sorting pens. Injuries like these are extremely rare in the wild -- under the stress and fear of confinement, they are quite common. )

There were once as many as 60 million bison that roamed North America before they were all but wiped out from negligent hunting. They have been a natural part of the Yellowstone region since the end of the Pleistocene. Nowadays, cattle ranchers who seem to have more right to order the death of wildlife then the general public does to save it, claim the bison spread brucellosis. This appears to be a myth. There has never been one documented case of the disease being passed from wild buffalo to domestic cattle, and so it seems the bison are being killed for no apparent reason. As the disease is most likely to be passed from one species to another by the ingestion of aborted fetal material, it is unclear how this would constitute a huge problem. If the bison and the cattle are properly monitored, this seems extremely unlikely to happen. There is also an effective vaccine for brucellosis, so why aren't the ranchers using this to immunize their cattle?

National Parks are public land, it rightfully belongs to all of the animals, not just the cattle ranchers, but we see over and over again our national park services kowtowing to the cattle ranchers. The slaughter of our wildlife must stop. It's way past time we start protecting and preserving our wildlife and wild space instead of allowing the small percentage of hunters, trappers and cattle ranchers to run roughshod over our natural world as if they hold the right to decide who lives and who dies. The only way forward seems to be to have a regime change at the government offices that run our parks and oversee our wildlife.

There is one thing each person can do however if you love horses, big cats, coyotes, and other wildlife, and you are still eating meat, you are participating in the problem that is at the root of this entire issue. 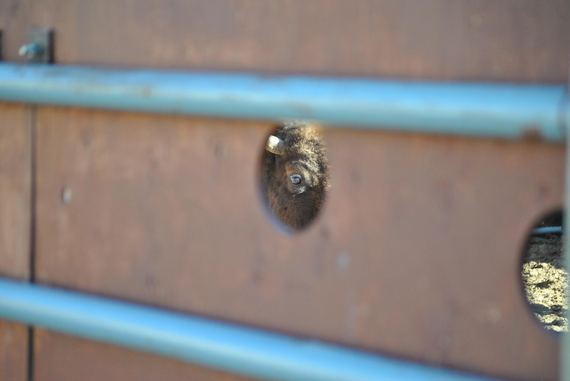