A lot can happen in two weeks. Normally the foreign exchange market for developed nations move like glaciers. But in these days of global warming even glaciers are breaking speed limits.

Less than two weeks ago the World Bank President had some interesting things to say regarding the dollar.

"The United States would be mistaken to take for granted the dollar's place as the world's predominant reserve currency," Mr. Zoellick told the School of Advanced International Studies of Johns Hopkins University.

In his strongest comments yet in the debate over the dollar's reserve-currency status, Mr. Zoellick said that, "looking forward, there will increasingly be other options to the dollar."

For 65 years the American dollar has been the world's reserve currency. Practically as good as gold. So Mr. Zoellick's words might be considered controversial.

However, this was merely the start of several startling revelations. Just a week later the U.N. joined the dollar bashing theme.

In a radical report, the UN Conference on Trade and Development (UNCTAD) has said the system of currencies and capital rules which binds the world economy is not working properly, and was largely responsible for the financial and economic crises.

It added that the present system, under which the dollar acts as the world's reserve currency , should be subject to a wholesale reconsideration.

Although a number of countries, including China and Russia, have suggested replacing the dollar as the world's reserve currency, the UNCTAD report is the first time a major multinational institution has posited such a suggestion.

China and Russia have been calling for a new world currency regime since March. While their opinions matter, they couldn't knock the dollar off its pedestal alone. They needed cooperation for other nations and international groups. The U.N. calls for a new world currency system comes just three months after the IMF proposed its own solution -- Special Drawing Rights.

SDR's aren't an actual currency. They are more like a basket of currencies that act as a claim on real currencies. SDR's were originally created in 1969 when the Bretton-Woods system was breaking down, to replace gold and silver on international transactions. SDR's were called "paper gold" at the time. 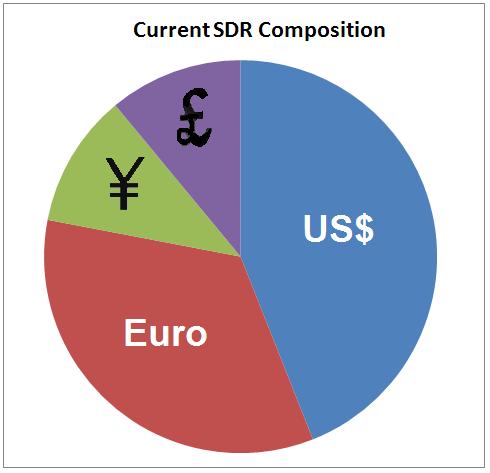 The advantage of using SDR's for creditor nations like China is that it diversifies their currency reserves and functions as a "transitional reserve currency" until a new currency can take the dollar's place. Disadvantages are that only a few currencies make up an SDR and the total amount of SDR's is limited.

So the danger that SDR's pose to the dollar are limited without further efforts by the world's creditor nations. Which makes this news report disturbing.

In the most profound financial change in recent Middle East history, Gulf Arabs are planning -- along with China, Russia, Japan and France -- to end dollar dealings for oil, moving instead to a basket of currencies including the Japanese yen and Chinese yuan, the euro, gold and a new, unified currency planned for nations in the Gulf Co-operation Council, including Saudi Arabia, Abu Dhabi, Kuwait and Qatar.

Secret meetings have already been held by finance ministers and central bank governors in Russia, China, Japan and Brazil to work on the scheme, which will mean that oil will no longer be priced in dollars.

It was no secret that China and Russia are unhappy with the dollar hegemony. Same goes for OPEC nations such as Iran (which no longer sells oil for dollars) and Venezuela. But when Japan and Dubai jump on board this becomes very serious.

Fisk's article was met with thunderous official denials from all over the world. However, there was a certain lack of credibility in those denials if only because a meeting like this is the next logical step in doing what these countries have been talking about for months. 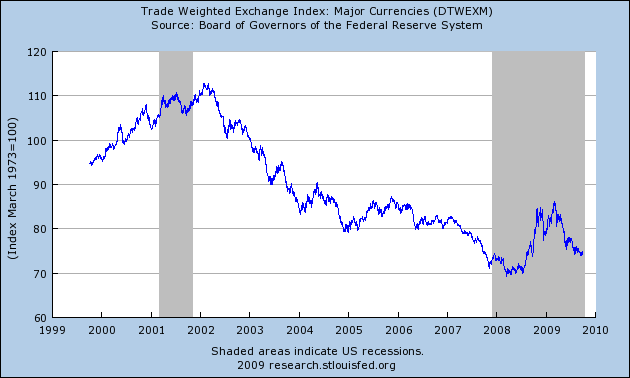 A skeptic might point out that all this talk about countries moving away from the dollar is just talk without any concrete action. That brings us to today's revelation.

World leaders are acting on threats to dump the dollar while the Obama administration shows a willingness to tolerate a weaker currency in an effort to boost exports and the economy as long as it doesn't drive away the nation's creditors. The diversification signals that the currency won't rebound anytime soon after losing 10.3 percent on a trade-weighted basis the past six months, the biggest drop since 1991.

"Global central banks are getting more serious about diversification, whereas in the past they used to just talk about it," said Steven Englander, a former Federal Reserve researcher who is now the chief U.S. currency strategist at Barclays in New York. "It looks like they are really backing away from the dollar."

The dollar's 37 percent share of new reserves fell from about a 63 percent average since 1999. Englander concluded in a report that the trend "accelerated" in the third quarter. He said in an interview that "for the next couple of months, the forces are still in place" for continued diversification. 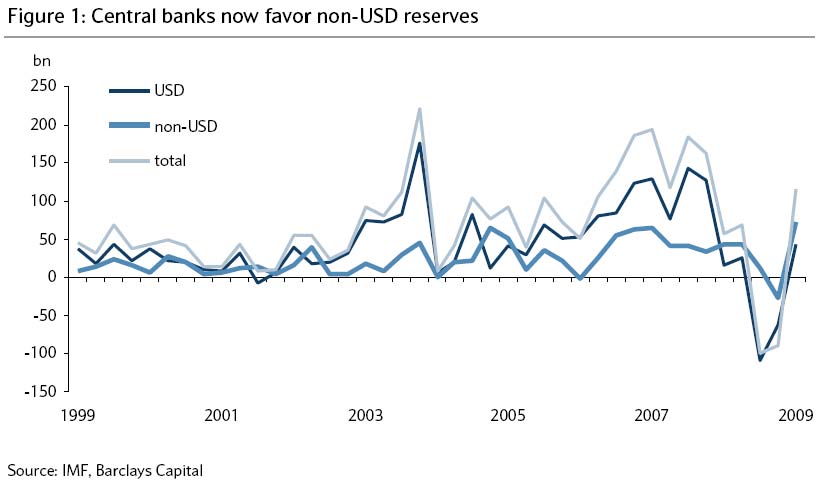 That counts as "concrete steps." The dollar bulls have several responses to these bearish forecasts. The first, and most obvious one would be that this only involves official movements. It doesn't include private foreign investors. However, a deeper reading of Barclay's article effectively ends that discussion.

Since the global recovery got underway at the beginning of Q2, the USD has been among the weakest of the major currencies. By definition this means that the US current account funding needs, while lower, were not reduced enough to stabilize the dollar. Other data, in particular the US Treasury TIC data, show unambiguously that there has been an outflow of capital from the US. The US private sector has been buying USD30-40bn of foreign portfolio assets, effectively doubling the financing need implied by the US trade deficit. The foreign private sector has been selling US Treasury obligations. 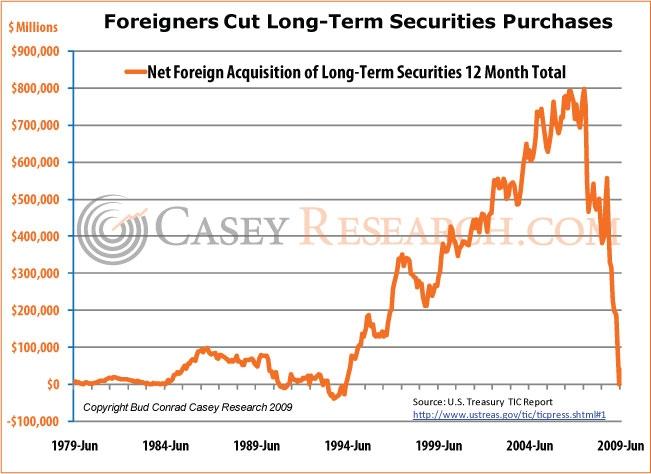 The second point the dollar bulls will point out, and it is a good point, is that if foreign selling of dollar assets are so significant, then why are stocks and bonds doing so well? Shouldn't the selling show up there first? After all, if stocks and bonds don't care then how much effect does it really have?

It's a good point, but there is a huge caveat -- no one is buying Agency debt except for the Federal Reserve. Not even private domestic investors want anything to do with Fannie Mae and Freddie Mac debt. Mortgage rates are so low right now because the Federal Reserve is printing money out of thin air and buying mortgages on the secondary market, sometimes in as short as just 90 minutes.

It isn't just Agency debt. The Fed has been active buyers of Treasury debt as well.

While this pushes down interest rates, it also acts to push down the dollar. The Federal Reserve is not only dramatically expanding its debt obligations, but its balance sheet is getting filled up with mortgage-backed securities of questionable quality. 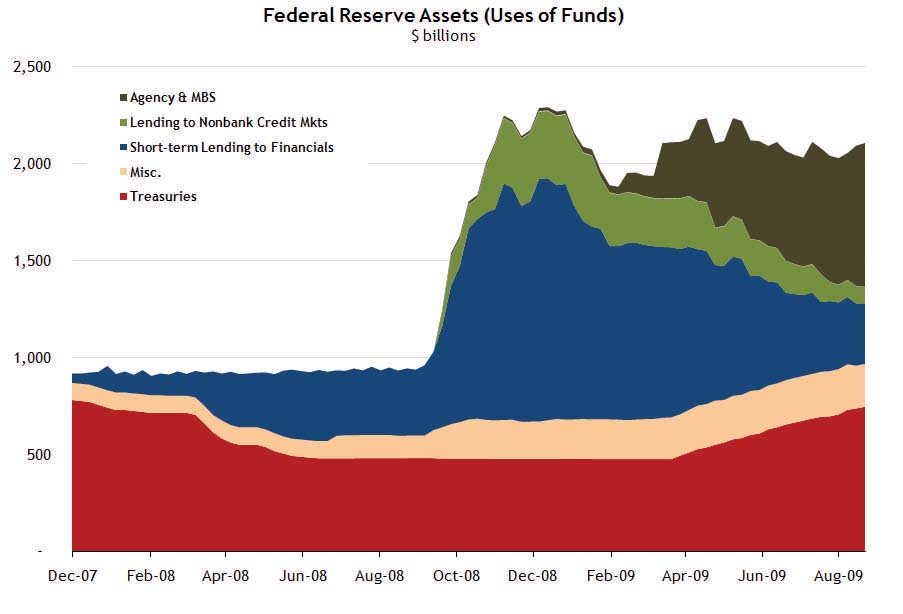 Of course massive federal deficits for years to come also directly contribute to the decline in the dollar.

So what does this all mean? Is the dollar doomed? Should we all rush out and exchange our dollars for euros and yen? No. The trade sentiment against the dollar is getting very crowded, and anti-dollar articles are easy to find these days. This is usually a sign of a coming dollar rally.

The dollar will not be allowed to collapse. Instead its decline will be managed. This will include violent corrections that will savage any dollar bear who is trying to make a quick buck.

However, if your investment timeline is measured in years rather than months, then betting against the dollar is a good trade. The dollar's fundamentals are terrible and it is only being supported because of the lack of a clear alternative. That won't last forever.

Imagine for a moment that there is an asset that has gone up in dollar value every single year for eight straight years, is about to have one of its best years in 2009, and is the best performing asset class of the decade.

Imagine that this asset has been going up in value in every currency in the world over the last five years. Imagine that worldwide demand for it is hitting all-time records while outstripping supply. At the same time worldwide production of it has fallen 10% over the same period.

Imagine that as recently as 2002 private ownership of this asset was outlawed in China, and now China is about to become the largest consumer of this asset in the world. In just the last month China's government started encouraging private consumption of this asset.

Imagine that all the major commercial producers of this asset are positioning themselves for years of rising prices.

Imagine that this asset has absolutely no danger of becoming worthless, and that its value only increases when the dollar declines.

Now imagine that professional investment advisers on Wall Street, who wouldn't hesitate to sell you black-market kidneys and weapons of mass destruction, if it were legal and they could make a profit on it, have universal disdain for this asset.

Imagine that if you mentioned buying this asset at a neighborhood party someone would be sure to think you are a kook.

Wouldn't it make you wonder what is wrong with this picture? Why is nearly everyone so dead-set against buying an asset that goes up in value every year, and who's fundamentals keep improving?

Yet that is the world that gold exists in today. The price of gold is hitting all-time highs, but unlike dot-com stocks in 1999, or house flipping in 2005, few people care.

The central banks of the world increasingly view the future with gold as a currency. On the other side, you can always tell gold's detractors because they still think we are in the 1980's.