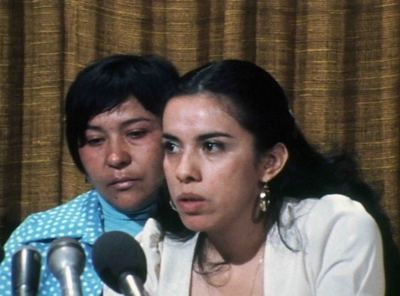 On February first, No Más Bebés, a documentary directed by Renee Tajima-Peña and produced by Virginia Espino, premiered on the award winning PBS series, Independent Lens. The film tells the story of the women behind Madrigal v. Quilligan, a little known case even within the reproductive health advocate community, but one that sheds light on the continued effort to control the bodies of poor women in this country. The case was brought forth by ten Mexican and Mexican-American women who found themselves sterilized after giving birth at Los Angeles County Medical Hospital/Center in the early 1970's.

The '70s were a watershed period in the reproductive rights movement, and Madrigal v. Quilligan was one of the first cases to use Roe v. Wade to argue for the rights of women to have decision-making power over their own bodies and decide whether to have children. Roe v. Wade, the Supreme Court decision we associate with the right to abortion, was also used to uphold the right to give birth among poor, immigrant women -- many of whom did not speak English -- who were being routinely asked to sign authorizations for tubal ligations while in labor.

Many believed that coercive population control was justified as a response to Mexican immigration. Hundreds of women who went to the county hospital to give birth had limited English skills. Imagine you are in labor and not speaking or fully understanding the language being used by your caretakers. Imagine hospital personnel, a medical intern in this case, approaches you with paperwork to sign for a tubal ligation (sterilization) you have never discussed or mentioned you wanted. You don't understand the question but you are led to believe your signature is important for the safety of your child. Years later you find out that while you were giving birth you were also sterilized, and now you are unable to have another child.

The 10 brave Latinas who fought for their right to have children under Madrigal v. Quilligan, lost the judicial case but won structural changes, including multilingual consent forms and a waiting period of 72 hours. These victories, however, haven't stopped the continued effort to deny bodily autonomy to poor women of color whose right to choose to have or not have children is continuously under attack by the very politicians who are supposed to represent them.

Similar to the sterilizations of the 1970s, today California imposes financial penalties on low-income women of color who procreate. The fears and biases about "welfare-dependent immigrants" -- which informed the push for the sterilization of hundreds of Mexican women as documented by No Más Bebés -- continues to inform policies that put a cap on how many children low-income women can have and remain eligible for assistance, and mandate particular birth control methods. Consider California's Maximum Family Grant (MFG), which strictly limits support for new children in low income families. In California, CalWorks recipients are provided with a list of approved birth control methods (one of which has been off the market for over 10 years). If a woman were to have a child/other children while on CalWorks, she is required to prove that one of the approved birth control methods failed or that she is a survivor of incest or rape, in order to obtain additional assistance for that child.

In California and across the country, then and now, low-income women of color continue to face public and medical scrutiny based upon population control ideology. In other words, poor women should not have children, but if they happen to get pregnant, they are also denied the choice to terminate the pregnancy. Rather than look at women's reproductive lives through the narrow prism of the Roe v. Wade decision, these issues must be understood in the historical context of a reproductive rights movement that has been a driver for justice and freedom yet has been unable to firmly shake oppressive population control philosophies.

Population control laws like CalWorks adopt an underlying premise that poor women and women of color cannot be trusted to fully control their own reproductive health choices, and that government-sanctioned coercion is an acceptable policy framework. The women of the Madrigal case prompted laws that have protected many women from coercive sterilization, yet even with important advancements we still see draconian, racist and classist family cap policies today. Even in a state known for being at the frontier of progressive policies, particularly regarding women's reproductive rights, the stories that No Más Bebés tells, continue to resonate. California lawmakers need to take a stand to finally shed the lingering bias and oppression championed by the eugenics movement many decades ago.