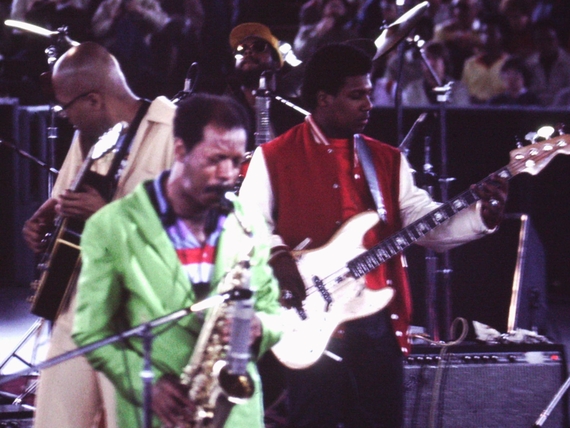 As a music journalist, it was my pleasure and honor to interview Ornette Coleman several times. There will be numerous biographical obituaries for the man who brought the "Change of the Century" to jazz in the late 50s, and continued to move forward until very recently. But my most vivid memory of him is a personal one.

I was working on a series of articles centering around Song X, a collaboration between Ornette and Pat Metheny. This corresponded with the release of the biographical documentary Ornette - Made In America. There was a screening of the film and subsequent party.

In preparation for all of this, I spent a lot of time with Song X, listening as I worked in my home office in the Bronx. My wife at the time worked as a graphic designer in Midtown, about five months pregnant with our first child.

As I was listening one afternoon, she called me on the phone. Not a big fan of the cacophonic nature of the free jazz that Ornette invented, when she heard the dense harmolodic compositions playing in the background, she admonished me to "stop swinging the cat around by it's tail and listen to me."

Fast forward to the evening of the screening and party, she put on her best maternity outfit and we went down to the Public Theater to see the film. After the movie, we took a stroll with a hundred or so other celebrants to a restaurant down the block for a bash. As the evening drew to an end, there was a grab and grip reception line, where I got to introduce her to Pat Metheny; Shirley Clark (the film's director); Ornette's drummer, son, and charge d 'affairs Denardo, and finally Ornette himself.

She looked at him appraisingly. "So you're the guy who plays that cat-swinging music?"

Denardo laughed so hard I thought he would fall over. Metheney looked shocked. Ornette, however, maintained his equanimity, smiled at her and said, "Some might call it that."

I'll miss the jazz warrior, the sonic visionary, the alto firebrand, and diffident genius. But I think what I'll remember most about Ornette is what a true gentleman he was.