Gene Lefebvre, a co-founder of the migrant aid organization No More Deaths, speaks about the humanitarian crisis on the U.S.-Mexico border in Arizona.

From May 13-16, I accompanied a delegation from Long Island to Tucson, Arizona, and Nogales, Mexico, where we learned firsthand about the ongoing humanitarian crisis on the U.S.-Mexico border, and the forces that drive people to undertake the journey north.

The reality is stunning in sheer magnitude: Since 1994, there have been more than 6,000 confirmed deaths on the border.

That figure, however, only begins to quantify the crisis, according to Gene Lefebvre, a co-founder of the faith-based migrant aid organization, No More Deaths.

"That's confirmed deaths, and people who have had a lot of experience in the desert doing this work ... they estimate the number of deaths are five to ten times that many," Lefebvre says. "We don't find the remains because of the vastness of the desert, because of the way the desert treats remains, like within three months they're usually gone ... If you go off the trails and you're lost, you're not likely to be found, living or dead."

That migrants are forced to cross the Arizona desert to reach the U.S. is no accident, according to Lefebvre.

For thousands of years -- yes, thousands -- the U.S.-Mexico border in Arizona has been relatively open. But in the mid-to late-1990s, the U.S. embarked on a policy of militarization along its southern border. 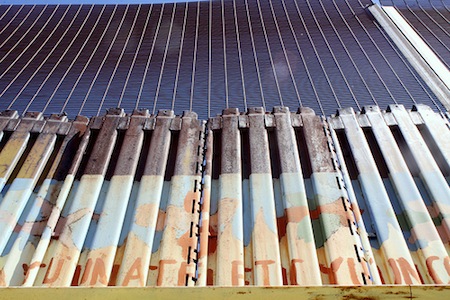 A section of the border fence in Nogales, Mexico. (Credit: Ted Hesson)

The militarization of the border followed the passage of the North American Free Trade Agreement (NAFTA). The agreement, along with other similar trade deals, led to a sea change in the economies of Mexico and Central American nations, with millions of farmers losing their livelihood due to increased competition from the U.S.. As farmers lost their jobs, they began to head north.

"This was a plan from the beginning to funnel people into this desert, which is considered one of the worst deserts in the western United States," Lefebvre says. Government documents show that the U.S. believed that the dangerous journey through the desert would serve as a deterrent for illegal immigration, according to Lefebvre.

"People were going to die in this desert, and then they would take the stories home and tell people, "Don't come up here, it's too deadly," he says. "Well, that policy has not worked. Now it was 1994 that it was started, and we're still here and we're still doing it, and people are still dying in great numbers."

Lefebvre cites one statistic that underscores the scope of the crisis: The number of confirmed migrant deaths along the border since 1994 is roughly the same as the combined number of U.S.-soldier fatalities in Iraq and Afghanistan. 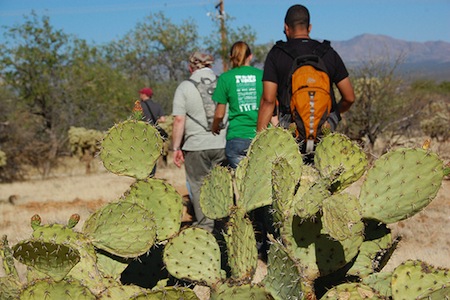 During our time in Arizona and in Mexico this May, we met with a variety of experts and service organizations. We also heard firsthand from migrants about the perils of the journey through the desert, and the stark economic realities that pressure people to head to the U.S..

The groups that facilitated our delegation -- Borderlinks and Witness for Peace -- made it possible to hear so many stories in such a short period of time.

In the coming weeks, I'll be posting photos, audio, and video from our delegation on Long Island Wins with the hope that the stories we heard will have reverberations here on Long Island and beyond.