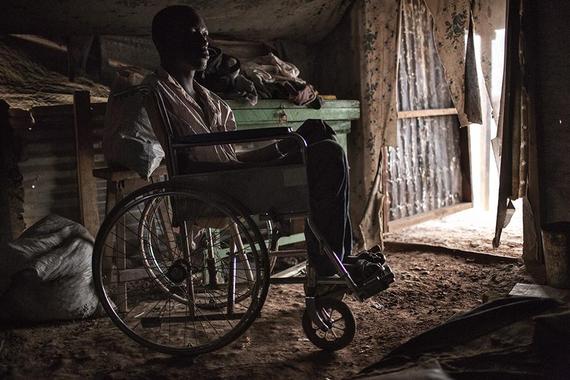 Ambroise, a 27-year-old man with a physical disability, in the M'Poko camp in Bangui, Central African Republic. His parents abandoned him when Seleka forces attacked their neighborhood. He had to be carried 2-3 kilometres to the M'Poko internally displaced camp near the airport by a little boy. © 2015 Marcus Bleasdale/VII for Human Rights Watch

Participants in this week's [5/23-24] World Humanitarian Summit in Istanbul, with its lofty call to "leave no one behind," should consider the story of Hamamatou from the Central African Republic.

When anti-balaka rebels attacked Hamamatou's village of Guen in early 2014, the 13-year-old had no way to run. A bout with polio had left her with a serious disability. Her brother tried to carry her to safety on his back, but soon was too exhausted to continue. "I told him, 'Souleymane, put me down and save yourself'," she told me. "He said he would come back for me if they didn't kill him."

Souleymane never returned, and Hamamatou spent two weeks abandoned by the river. Then the anti-balaka fighters found her. Seeing she could not walk without assistance, the fighters decided to kill her. "They said, 'We have found an animal, let's finish it off'," Hamamatou recalled. A female fighter intervened to save her life.

War is difficult for everyone, but one of the often untold stories of many conflicts is the profound isolation, abandonment, and neglect faced by people with disabilities in conflicts around the world.

Throughout our work on the Central African Republic, Human Rights Watch has repeatedly met people with disabilities who had been left behind when their communities were attacked. We learned of many cases in which the Seleka and anti-balaka rebels showed no mercy to those abandoned, killing them on the spot. At times, the killers showed extreme cruelty toward people with disabilities: one young pregnant woman with a disability was tied up and thrown alive on a fire by the Seleka fighters, and suffered a horrible death.

For many people with disabilities, the profound feelings of isolation and neglect they experience in camps are often more upsetting than the abandonment they faced during the fighting. Hamamatou, the young polio survivor, told me that she had never felt as lonely in her life as she did when she finally reached a camp, even though she had never lived so close to hundreds of people. No one ever brought her food, or even a bucket of water to wash herself. Aimé, a blind musician living in the Mpoko camp in the capital, Bangui, told me, "Sometimes I get so angry and discouraged by the difficulties of living here that I just stay inside for the whole day."

Much of this suffering takes place not because the humanitarian community lacks the resources to meet the needs of people with disabilities, but because the humanitarian community remains mostly unaware or insensitive to the plight of people with disabilities in conflict. As one senior UN official admitted to Human Rights Watch: "We don't pay enough attention to the issue of disability. We should be doing more. There is no place for discrimination in humanitarian action."

At the World Humanitarian Summit, governments have taken a key step by endorsing the new Charter on Inclusion of Persons with Disabilities in Humanitarian Action. The charter commits governments to ensure that their humanitarian response plans and programs reflect the various needs and capacities of women, girls, men and boys with disabilities by the end of 2020.

One final, perhaps most important, lesson we learned from people with disabilities during our work in the Central African Republic is that they are often an amazing source of strength and resilience during times of conflict. Perhaps the only community that stayed truly united during the bloody sectarian conflict in the Central African Republic was people with disabilities. They never broke down along sectarian lines, and continued to look after each other with courage and care. In Mpoko camp, people with disabilities organized one of the most popular bands in town, with inspiring songs about ending war and reconciling the nation. That strength and resilience is something from which we all can learn.