He writes in the FRBSF's latest Economic Letter,

"In the post-financial crisis world, however, new realities pose significant challenges for the conduct of monetary policy. Foremost is the significant decline in the natural rate of interest, or r* (r-star), over the past quarter-century to historically low levels." 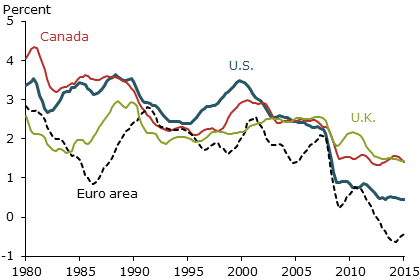 In his words, "battling low inflation and stagnation via unconventional monetary policy actions like quantitative easing and near-zero or even negative interest rates" isn't working any longer. Because central bank interest rates have already declined to negative rates in many EU countries. It means the savers have to pay to keep their money in central banks, rather than central banks paying the savers.

Worldwide interest rates have been falling since 1980, down to zero inflation during 2015. It means economic stagnation, as savers would rather pay to keep from using their savings, instead of investing said savings. This is surely not a sustainable state of affairs.

What is the answer? The Fed should firstly stop focusing over excessively on inflation targets, something I've been advocating in past columns. The Fed's target rate of 2 percent is too low, since any significant economic growth requires higher than 2 percent inflation--more like 3 to 4 percent. The Bill Clinton era had inflation rates of 4 percent plus, and with 4 years of budget surpluses. Even retro-Reagan Prez GW Bush had to have 3 percent plus inflation to grow enough to pay for his wars and tax cuts.

Why? There isn't enough demand being generated for new products and services that would generate higher growth and inflation. Governments, as well as wealthy individuals are hoarding their cash, rather than taking the risk of making new investments. It's in part a prolonged reaction to excessive risk-taking that brought on the Great Recession.

"The underlying determinants for these declines are related to the global supply and demand for funds, including shifting demographics, slower trend productivity and economic growth, emerging markets seeking large reserves of safe assets, and a more general global savings glut (Council of Economic Advisers 2015, International Monetary Fund 2014, Rachel and Smith 2015, Caballero, Farhi, and Gourinchas 2016)," says Fed President Williams. "The key takeaway from these global trends is that interest rates are going to stay lower than we've come to expect in the past."

One of his prescriptions for remedying this malaise of low inflation and economic stagnation in order to create longer-run growth and prosperity is what leading macro economists like Paul Krugman and Larry Summers have been pounding the pavement over for years--greater long-term investments in education, public and private capital, and research and development.

"Despite growing skepticism and endless column inches questioning whether college is worth the cost, the return on investment in post-secondary education is as high as ever (Autor 2014, Daly and Cao 2015). Likewise, returns on infrastructure and research and development investment are very high on average (Jones and Williams 1998, 2000, Fernald 1999)," says Williams

It means also a return to a Keynesian mode of thought and policies. Ways have to be found to entice this hoarded wealth back into circulation, as the New Deal policies of FDR did in the 1930s, and that created the modern infrastructure and standard of living we Americans experience today.

It also means abandoning the Trickle Down theories of the Reagan era that said "government is the problem", and transferring more wealth to the wealthiest will lift all boats. Let us hope more central bankers-and US Fed Governors--begin to think as does Dr. Williams.