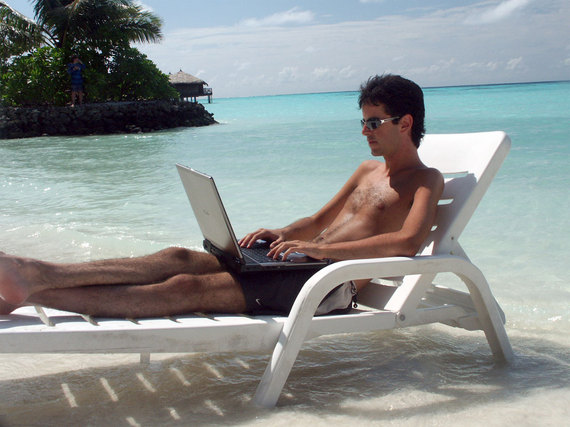 No one talks about flipping burgers with anything but disdain. The term is shorthand for a dead-end, subsistence job with small economic reward and no psychic profits at all.

Flipping burgers can certainly be like that. It can also be a stopgap for someone in a tough financial spot. It can be a first taste of employment in a summer job. It can be a stepping stone to a business of your own.

The flipping burgers analogy is the right one for talking about the gig economy, the on-demand economy, the contingent labor force -- use whatever term you like. No one has an idea yet of how large a slice of the American economy the phenomenon comprises, although the term "gigonomics" has been around since at least 2009. In 2015, it's a topic candidates from both major political parties feel obliged to discuss.

The gig discussion is usually binary. Contingent employment is either (A) a boon offering flexibility and autonomy to professionals, parents and aspiring entrepreneurs; or (B) a trap for desperate people offering a bare-bones existence, no career path and relieving employers of any obligation for the well-being of the people who work for them. It's sort of the way we talk about flipping burgers.

Faster than imagined. The "gig" in gigonomics can be understood in two ways -- as a short-term project and as the foundational measure of storage in information technologies. The project gig is enabled by the digital gig. Because of both, the barriers to entry in all kinds of business get lower all the time.

The gig economy is developing faster than anyone imagined. Jobs -- or, more specifically, tasks -- that no one imagined could be automated or made digital even five years ago are becoming commonplace. Who predicted that one day there'd be a phone app for hailing a taxi and that it would upend an industry that's been around for centuries? Or that a graphic designer in Boston might compete for work with someone in Ukraine on both price and quality?

Companies feel pitiless pressure to drive out costs, and have felt it for a decade or more. Hiring a contractor without benefits or long-term security offers companies flexibility and less risk. Simultaneously, people working in those organizations have accustomed themselves to digital tools that allow them to work apart from one another--video conferencing, screen sharing, collaboration sites like Google docs, work planning sites like Trello, file sharing utilities like Dropbox. Into this mix is a growing comfort with flex-time arrangements and working remotely that has been developing for years. These phenomena create a cultural comfort with contingency--among employers especially.

A rough consensus about the exchange of obligation between employed and employer is struggling to be born. Employers feel little responsibility for contingent labor. It's a position that would once have been culturally unacceptable. But because the economics are so compelling, it assumes greater legitimacy -- especially in regard to people you will never meet. Legal battles over what defines a contractor versus an employee (like the one Uber fought and lost in California this year) will one day be understood as the first steps in rewriting that portion of labor law.

Tipping the balance toward talent. Contingency often works to the disadvantage of contingent labor because, for now, the demand side holds the best cards. That may soon change.

A gig economy works best for people who already have things. Digital sophistication is the first thing they own. Education is another. Even Uber drivers need to have things -- a drivers' license and capital, to name two. Not everyone will be a coder or a designer, of course, but successful independent agents all need a skill that's in demand combined with something to make them stand apart. Without that extra it's a buyers' market for talent.

The beginning of the end for the buyer's market for talent may already be happening inside organizations where people have conventional "jobs." Digital innovations are giving enormous power to individuals and, in the process, potential thwarting conventional ideas of employment and intellectual property. A junior person, say, in a bank or inside a machine shop, could dream up a new product, research it and create a logo without asking anyone's permission. Who owns the idea in that case? Instead of having an employee the organization may find it has a partner instead.

One can imagine a time when the gig economy has become more entrenched than it is and contingent labor affiliates rather as medieval guilds did -- setting a market price for labor, establishing professional standards and discovering all the other benefits of association.
Until then we're feeling the absence of an agreed-upon center. That's the source of the floating unease about the gig economy. There's no shared sense of the future's possibilities until we work out the right level of complexity for thinking about gigonomics.

Other featured articles by the authors:
"Little Brothers' Big Moment"
Most of us are now accustomed to an idea of ourselves as collections of digital data that are tracked, packaged and turned into money by someone else. We are beginning to view our private behaviors and transactions as goods we can exchange-but for what?

"Seeing Acquisitions as Power Transfers."
When an animal eats a vegetable it transfers the latter's power to itself though they occupy different categories. That's what good acquisitions do. It's what conventional mergers don't.