I first fell in fascination with the Scarlet Witch (Wanda Maximoff) during the X-Men House of M story arc in the comics. Wanda was ridiculously powerful and also unhinged, broken-hearted and emotionally scarred. After both the X-Men and the Avengers plotted to kill her, and then her own father (Magneto) attacked her twin brother (Pietro), Wanda totally lost it and whispered the spell "No more mutants" disempowering 99 percent of the mutant population. 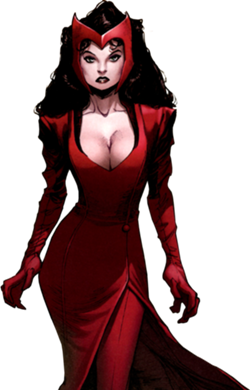 Wanda is thusly blamed for having incited genocide on her own race. Therefore, it's ironic that Wanda is going to be in the upcoming Avengers movie which will be mutantless. Fox has the rights to the concept of mutants in the movie world, not Marvel. The film is definitely going to be amazing, because Joss Whedon is an incredible genius, and also it's really important to having more women in super hero films! However, I'm very interested in how they're going to explain who Wanda and Pietro are without acknowledging the existence of mutants.

Mutants are special not only because they're born with innate powers, but because they're genetically different and thus often subjugated, ostracized, hunted, vilified and used as a straw man by ignorant intolerant humans. Part of what makes them interesting characters is their struggle to fit in to a society that fears and misunderstands them.

So much of Wanda's dangerous rage and instability is predicated on her identity as a minority. I'm curious how they'll illustrate that in a film without being able to use the word "mutant." She's emotionally crippled because of an unstable relationship with her father, Magneto, a radical pro-mutants rights advocate, who consistently prioritized the cause of mutants over his children. Magneto even used his children to his advantage in his obsession with a revolution. Who is Wanda if she's not the daughter struggling for the fatherly love of one of the most influential and dangerous mutants of all time? We know what her powers are -- chaos magic -- but without Magneto's manipulative upbringing, what would Wanda's personality be like?

Wanda struggled with her mutant minority identity. She was a member of the Brotherhood of Evil Mutants, who weren't necessarily evil; they were just more focused on aggressively taking the rights they felt mutants deserved than the more cohesive X-Men. She identified as a minority and harbored resentment towards her oppressors. What will her personality be like without this bitterness? Who are any of us without the nuances of identity politics?

I can't wait for The Avengers 2. It's going to be amazing because everything Joss touches is a really special work of art. I know he'll answer all my questions in a super cool way. But until then, I'll just walk around whispering my own spell: "More MORE Mutants!"